The postponement of the constitutional referendum planned for April 16 would not be a surprising outcome. 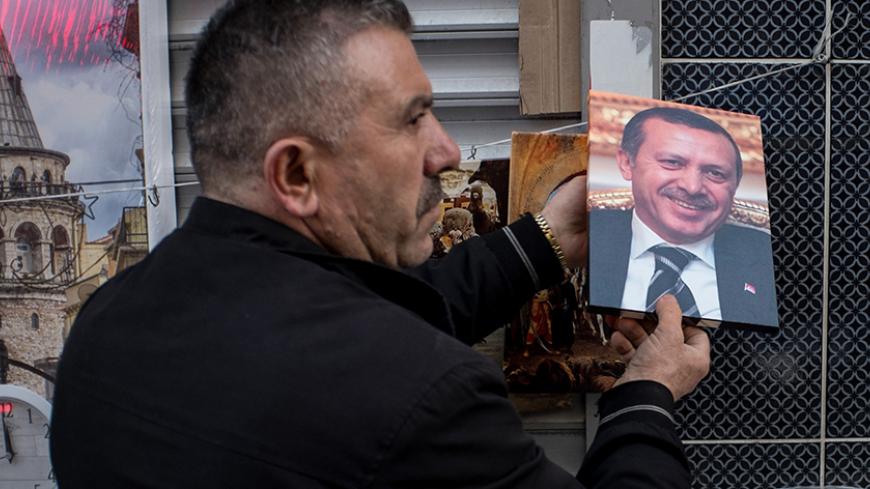 A man selling paintings packs up a print of Turkey's President Recep Tayyip Erdogan as he closes his stall for the day in Istanbul, Turkey, Feb. 23, 2017. - Chris McGrath/Getty Images

The image of President Recep Tayyip Erdogan and Chief of Staff Gen. Hulusi Akar sitting next to him is more expressive than anything else of the tremors involving the government and the military in Turkey. Dressed not in military fatigues but in an elegantly tailored civilian suit, Akar is a subservient-looking general — which has to be the case in any democratic regime, indeed — with a troubled look and a nervous expression on his face, reflecting the increasing unease in the higher echelons of power.

While the fateful date of April 16 — the day the constitutional amendments that could give Erdogan extraordinary executive powers and transform him into the "sultan president,” as many observers and his critics allege — approaches, the possibility of rejection by popular vote surprisingly increases.

This by itself is a real matter of concern for Erdogan. He has proved to be a master of winning elections over two decades, and nobody could imagine that he would gamble the biggest prize of his long and successful political career. Every precautionary measure to secure a “yes” vote on April 16 has been taken.

Turkey is moving to the polls under unprecedented waves of crackdown that saw more than 110,000 people purged, sacked or detained, with around 44,000 put behind bars, including co-chairs of the pro-Kurdish Peoples’ Democratic Party (HDP), and many prominent journalists and opinion makers in the country. Any semblance of dissent against Erdogan is under threat of being severely punished. He characterizes anybody who announces or may think of casting a “no” vote as a villain, traitor and terrorist. A state of emergency is in force and will remain in place on election day.

Despite all the prerequisites for “yes” that are in place, the air in Turkey indicates that “no” has a real chance to prevail. The reason is presumably because the “yes” camp seems to have formidable cracks.

The Justice and Development Party (AKP) under Erdogan’s leadership formed an ad-hoc coalition in parliament with the far right Nationalist Movement Party (MHP) of Devlet Bahceli and managed to pass the constitutional amendments to be put to popular vote. But the MHP's grassroots do not see eye to eye with their chairman.

The MHP opposition led by Meral Aksener — a former interior minister and a very popular figure among MHP voters — to both Bahceli and Erdogan's monopoly of political power has been rapidly growing. Aksener and other loosely allied leading figures in the party are carrying out an effective campaign against Erdogan and the “yes” camp. The cracks within ultra-nationalist circles reflect to a certain extent the cracks seen within Erdogan’s own camp in his AKP power base.

There are widely circulated rumors that if Erdogan feels that a “yes” vote won't be secured April 16, he might invent a reason to call off the vote. And what could be that reason? Nobody is certain. But with a reputation of making quick decisions and an ability to move swiftly, Erdogan could take steps that could postpone the date of the vote. Situations in Syria or Iraq may present some pretexts for dramatic military adventures Erdogan and his loyalists in the high echelons of the Turkish state might initiate.

For that, Erdogan needs a docile and loyal army chief: Akar. However, Akar has become a magnet for attracting mounting criticism from within and outside of the military. The lifting of the headscarf ban for female personnel of the armed forces two weeks ago seemed to serve as the last straw for many in the military ranks already heavily burdened since the failed coup attempt of July 15, 2016. The headscarf move drew harsh criticism from staunchly secularist military circles who have been allied with Erdogan against the Gulenists for some time.

The disquiet that had been already gathered around Akar was laid out under the headline “Military Headquarters Unease” in the daily Hurriyet, the one-time flagship of the Turkish media. The report listed seven matters of concern of the top military brass. The decision to lift the headscarf ban was at the top.

Hurriyet emphasized the anger of military officials about criticism directed at them from opposition circles. At the same time, the Hurriyet headline triggered the worries of Erdogan loyalists as if it reflected unrest within the military and signaled an ongoing danger of a new coup attempt.

Speaking at a press conference before his departure to Pakistan, Erdogan accused Hurriyet of being “very ugly, shameless, rude,” and he added that the story not only bothered him but also deeply bothered the Turkish Armed Forces. With his grim, unhappy face, a worn-out Akar was living proof of what the president meant.

After his statement, the shares of Dogan Holding, the conglomerate Hurriyet belongs to, dropped drastically on the Istanbul Stock Exchange. The daily issued a statement of apology and its editor-in-chief was fired. It bowed immediately to a nervous Erdogan.

Notwithstanding a mainstream media that is acquiescent to the president and a chief of staff who has seemingly affixed his fate to that of Erdogan, the uneasiness within the military is hard to conceal. It is so traumatized, particularly in the wake of last year's failed coup, that its uneasiness does not suggest the potential for a new coup attempt. That, however, does not prevent Erdogan and the people around him from getting nervous as they feel as if they are challenged everywhere — from the traditional nationalist power base to the military, which does not seem totally subdued.

Erdogan is the incontestable strongman of Turkey. But he gives an image of an uneasy strongman — an oxymoron. His uneasiness is fed on one hand by a potentially noncompliant military and on the other by a populace that may reject his bid.

Thus, if the vote on April 16 is postponed or never takes place, that would not be a surprising outcome. On the contrary, it would reflect how acute the power struggle is behind the curtains in Turkey. Turkey vacillates even more as Erdogan strives to be even stronger. It has become chronic for Turkey to be on the verge of further instability.