Mazlumder, Turkey’s main pro-Islamic human rights organization, has witnessed an internal revolution as those who criticized the government too much were kicked out. 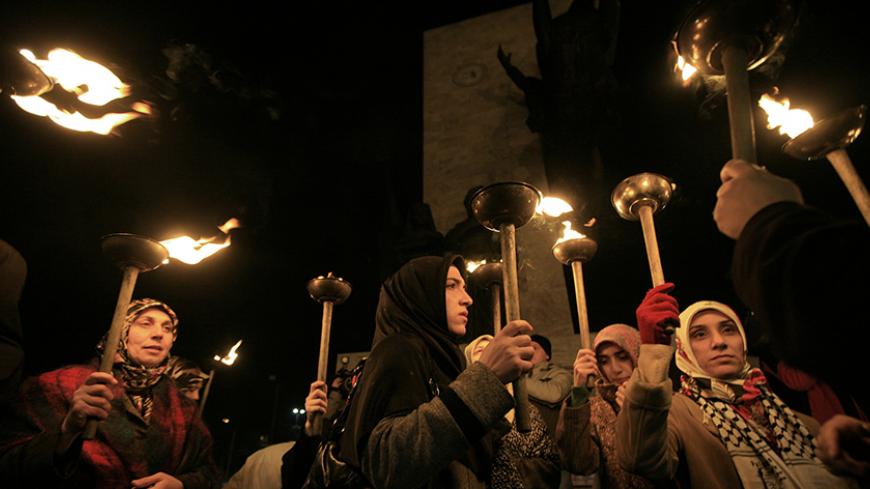 In Turkey, there are various human rights organizations dedicated to defend oppressed groups or individuals. One of them, Mazlumder, is unique, because it has explicitly Islamic credentials, unlike most others that are more secular. Yet the same Mazlumder is going through a major purge these days under a government that also has explicitly Islamic credentials. The apparent irony here is worth examining, for it tells a lot about the nature of the regime that is being built in Turkey.

Mazlumder was founded in 1991 by a group of pious Muslims alarmed by the draconian headscarf ban imposed in all schools, universities and public jobs. While defending the right to wear a headscarf as a human right, the organization also expanded its scope to other human rights crises such as the “Kurdish question.” During the bloody conflict between the security forces and the armed and outlawed Kurdistan Workers Party (PKK), in which both sides acted brutally, Mazlumder became one of the fair voices that tried to uphold the truth. The organization was, as its motto read, “With the oppressed and against the oppressors, whoever they are.”

Through its work, Mazlumder also made Turkey’s religious conservatives adopt the concept of “human rights,” which can be easily shunned by Islamists as a “Western invention.” I personally remember having such a discussion in the early 2000s, where the case for the freedom for the headscarf became a basis for accepting freedom for all walks of life.

In the past few years, however, a tension emerged within Mazlumder. The state was no longer the old secularist Turkey that oppressed pious Muslims. Now the state was rather dominated by those very pious Muslims under the pro-Islamic leadership of President Recep Tayyip Erdogan. Would Mazlumder still continue its mission of speaking truth to the ruling power? Or would it now be more lenient to power?

On this dilemma, the longtime head of Mazlumder, Ahmet Faruk Unsal, had given a landmark interview to the liberal news site T24 back in June 2015. He criticized his fellow Islamists for what he called “the golden calf syndrome.” Turkey's Islamists have grabbed the state, he argued, and that power began to corrupt them. While the headscarf problem is solved, he noted, there still are many other problems in Turkey in terms of human rights and civil liberties. The struggle for freedom and justice had to go on.

However, today Unsal is not leading Mazlumder. In late March 2017, a revolution took place within the organization. The Istanbul branch, which was known for a more pro-government slant, forced an early congress, did it in a rush and basically expelled the headquarters in Ankara from the organization. Moreover, this new administration also closed down 15 of the 26 branches of the organization, most of them in predominantly Kurdish cities such as Diyarbakir, Van or Sirnak. The thousands of members in these branches were also expelled from the organization. The process was called a “coup” within Mazlumder, where one faction took control and purged the rest.

Why did this coup take place? What is the difference between the old and the new administrations? Unsal spoke to Sediyani News about this, and he said there were two bones of contention. On the Kurdish issues, the old administration was documenting the human rights violations by both the state and the PKK, whereas the Istanbul branch only wanted to see the condemnations of terrorism. He said Syria was another dispute. He and his colleagues have condemned “the massacres by both the Syrian regime and opposition groups,” whereas the Istanbul branch wanted to hear only the anti-regime narrative.

In return, the new director of the organization, Ramazan Beyhan, spoke to the unmistakably pro-government daily Yeni Safak. “We are restoring Mazlumder to its original vision,” he claimed, arguing that the organization had turned too “pro-HDP” in the past, referring to the pro-Kurdish Peoples' Democratic Party, many of whose deputies are now in jail.

Omer Faruk Gergerlioglu, a former head of Mazlumder, spoke to Al-Monitor on this “philosophical problem,” which he sees as underlining the split and the takeover within the organization. “Turkey’s Islamic circles got interested in human rights simply because they themselves were oppressed by the former secularist system,” he said. This led to some interest in other human rights violations — the plight of Kurds, Alevis or Christians — he explained, but only half-heartedly. “And now there is a feeling that the state is finally in the hands of ‘our people’ and we should not raise much voice against it.”

It is noteworthy that Gergerlioglu, a principled human rights defender, was himself a target of the political purge the Turkish government initiated in the aftermath of the failed coup last July. A mere tweet in which he called for peace between the government and the PKK had caused him to lose his job as a medical doctor in October. Still unemployed, he sadly recalls that some of his friends in Mazlumder, those who represent the spirit of the new administration, never supported him and didn't even give him a call.

This is just one episode in the grim story of Turkey’s Islamic camp and its trial by power. When they lacked power, when they were oppressed, Turkey’s Islamists adopted a political language of rights, freedoms and justice for all. For a while, it looked like a conceptual shift, even a great “model” for other Muslims in the world. It took only very little time, however, for them to forget all that nice rhetoric and adopt an even cruder version of the authoritarianism they used to oppose. With all this, they might be winning the day. But in the eyes of the moral judgment of history, they probably will lose very badly.