Is Turkey trying to bypass Abbas in Gaza?

Hamas says it has not succumbed to Turkish pressure to negotiate with Israel, but the exchange raises discussion about Turkey’s role in accelerating the peace process between the adversaries. 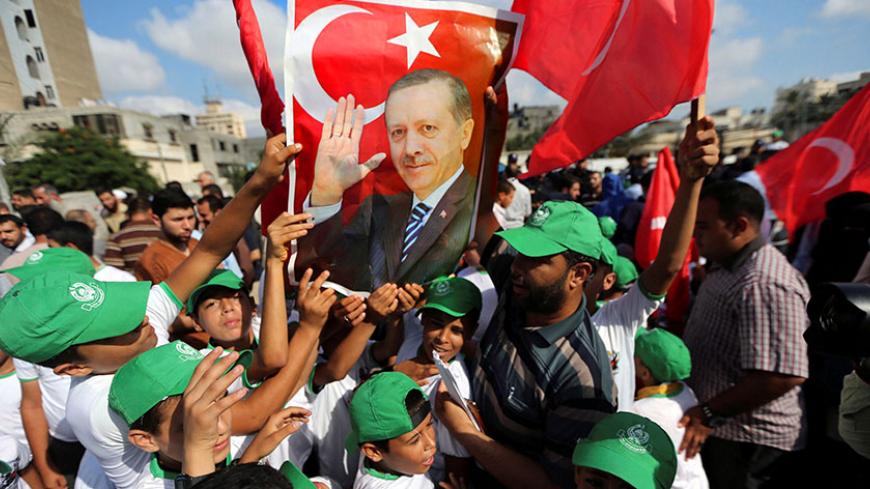 Although Hamas is working on maintaining warm relations with Turkey and Qatar amid frosty dealings with several countries in the Arab world such as Egypt, Iran, Jordan and Syria, it hasn’t been all good for Hamas and Turkey.

Turkish Foreign Minister Mevlut Cavusoglu made a sudden announcement March 22 during a meeting at the National Press Club in Washington, saying that Turkey has pressured Hamas to shift away from armed resistance and engage in negotiations with Israel and that Hamas showed readiness to recognize Israel. Cavusoglu did not specify when Turkey actually pressured Hamas.

On March 22, Al-Mayadeen website, which is close to Iran, cited a Hamas source on condition of anonymity commenting on Cavusoglu’s statements. The source said that Turkey pressured Hamas to recognize Israel, but that Hamas did not oblige.

On the same day, Hamas issued an official statement condemning the news that was being circulated in the media about its caving in to pressure to recognize Israel, and dismissing the reports as lies and false allegations.

Hamas spokesman Fawzi Barhoum told Al-Monitor, “The allegations in the media are false. Everyone knows how firm Hamas’ stance is in regard to its refusal of the recognition of the Zionist entity. I call on media outlets to be careful and professional before spreading news and fabrications that distort facts, harm Hamas and twist its stances.”

The Turkish Foreign Ministry did not issue any clarifying statements, which leaves room for interpretation. Did the silence confirm Cavusoglu’s words or did it admit to Turkish pressure on Hamas?

Hamas’ official statement did not denounce Cavusoglu’s statements but only condemned the media outlets that circulated the news, thus revealing Hamas’ possible reluctance to having a diplomatic confrontation with Turkey.

Member of Fatah’s Revolutionary Council and head of the Political Committee at the Palestinian Legislative Council Abdullah Abdullah told Al-Monitor, “Turkey is trying to convince Hamas of the peace process and the negotiations with Israel to keep hold of the Palestinian card, since it [Turkey] has tight relations with Hamas. And the movement itself wants to maintain good relations with Turkey.”

He added, “Hamas’ military leaders need money and arms from Iran because Turkey does not supply them. But Hamas is generally closer to Turkey than Iran, and it will be careful not to anger Turkey. The latter supports the Muslim Brotherhood, which Hamas is affiliated with. Turkey considers itself among the main Sunni countries competing with the Shiite Iranian axis in the region.”

This is not the first time that Cavusoglu talks about Turkey’s efforts to convince Hamas to recognize Israel. In January 2015, he declared that Turkey is one of the countries that contributed the most to making a difference in Hamas’ former and current political line.

He added, “We convinced Hamas that reaching a political solution would necessitate recognizing Israel.” Hamas kept silent back then, which was surprising.

Ahmed Yousef, who has good relations with Turkish officials and is a former political adviser to Ismail Haniyeh, deputy chairman of Hamas' political bureau, told Al-Monitor, “Turks are searching for a solution to the [Palestinian] conflict with Israel. Given Turkey’s relations with both Hamas and Israel, it is deploying efforts to reach a settlement that would establish a Palestinian state according to the 1967 borders and is trying to attenuate Hamas’ stances by reducing pressure on the movement and giving the impression that Hamas is seeking a political solution. Perhaps the Turkish-Israeli reconciliation in June 2016 further entrenched the Turkish brokerage between Hamas and Israel, and Turkey’s interest in Palestinian rights and its contribution to loosening the siege on the movement by convincing Israel to accept political solutions.”

Hamas and Turkey had a row a few weeks back when Turkish Prime Minister Binali Yildirim and his deputy Mehmet Simsek condemned the Palestinian attack on Jerusalem on Jan. 9, which killed four Israeli soldiers. On the same day, Hamas expressed its disapproval of the Turkish stance and said that resistance is a lawful right in international laws and Israel’s acts against the Palestinian people are terrorist acts.

Turkish Ambassador to Israel Kemal Okem announced during a lecture at Tel Aviv University on March 20 that Turkey does not support Hamas, but rather the people of the Gaza Strip, and wants to reduce their suffering.

Ali Bakir, an independent researcher in Turkey, who is close to Turkish politicians, told Al-Monitor, “Turkey supports a fair peace process and the establishment of an independent Palestinian state as per the 1967 borders and encourages all parties to move in this direction; Israel must keep potential commitments and Hamas must agree. But Turkey can only advise Hamas. I don't think Hamas would cave in to Turkish pressure or that Turkey would put pressure to begin with because Israel has not made any commitments. Still Hamas is preparing a political document, which is an important step that resulted from the movement’s introspection and negotiations with countries in the region like Turkey.”

A Palestinian Foreign Ministry official in Ramallah told Al-Monitor on condition of anonymity, “Turkey — which has good relations with Hamas — is not hiding its endeavors to tame Hamas and embellish its image before the international community to show that the movement is capable of handling the Palestinian leadership, either through bypassing Palestinian Authority President Mahmoud Abbas or keeping Hamas by his [Abbas’] side. By prolonging peace between Israel and Hamas in Gaza for years to come, Turkey is paving the way for a potential role in the Gaza Strip. Hamas’ political document will soon be issued, and it will reflect a new rhetoric that approves of a Palestinian state as per the 1967 borders.”

President Recep Tayyip Erdogan’s Turkey has personal and close relations with Hamas, mostly with Hamas’ former political bureau head Khaled Meshaal who is a constant guest in Ankara, most recently in December. Turkey welcomed several former Hamas detainees who were released from Israeli prisons as part of the Hamas-Israel exchange deal in 2011, while Hamas warmed up to a Turkish role in a new exchange deal with Israel. Hamas also congratulated Erdogan on thwarting the coup attempt in July.

Turkey hopes that this harmony with Hamas will engage the movement in the peace process, but Hamas’ election of a more radical, pro-Iran leader, Yahya Sinwar, at the end of February might foil Turkey’s pre-made plans.