Will Turkey be added to European list of undemocratic countries?

While various European countries have canceled pro-referendum rallies organized by Turkish politicians, the Monitoring Committee of the Parliamentary Assembly of the Council of Europe has called for Turkey to be added to its list of countries considered undemocratic. 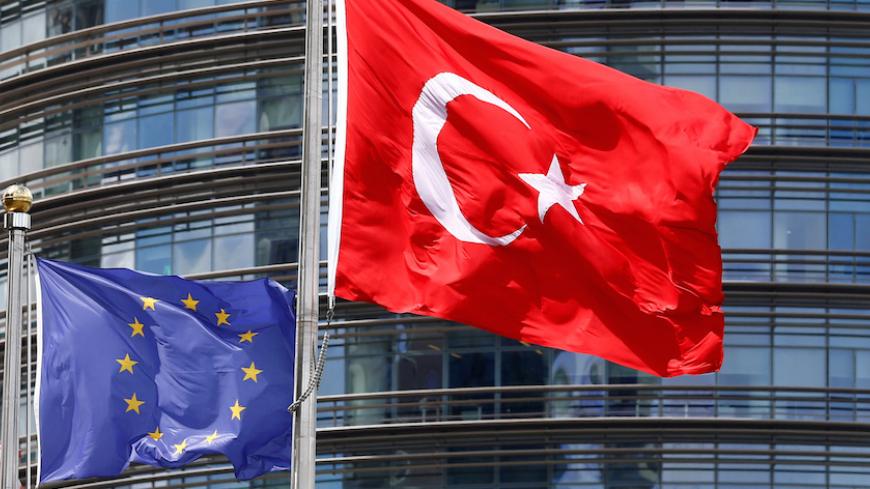 A European Union (L) and Turkish flag fly outside a hotel in Istanbul, May 4, 2016. - REUTERS/Murad Sezer

In a further blow to Turkey’s spotty global image, the Monitoring Committee of the Parliamentary Assembly of the Council of Europe (PACE) called March 8 for Turkey to come under its formal scrutiny, a status reserved for members that are deemed to be backsliding on democracy. Nine countries, including Armenia, Azerbaijan, Ukraine and Russia are currently on that hook.

In a report statement the Strasbourg-based body, of which Turkey is a founding member, said, “Eight months after the [July 15] failed coup and the declaration of a state of emergency, the Monitoring Committee is concerned to note that there has been a serious deterioration of the functioning of democratic institutions in the country.”

A Final decision on Turkey's status is set to be made in April.

PACE cited the tidal wave of purges that have engulfed the country, with a quarter of all judges and prosecutors, a tenth of the police force, 30% of diplomats and 5,000 academics sacked without legal recourse. It also expressed alarm over widespread detentions of journalists and the lifting of immunity of 154 members of parliament.

The pro-Kurdish Peoples’ Democractic Party is the worst hit, as practically all of its parliamentarians were stripped of their immunity and at least 10 of them, including co-chairs Figen Yuksekdag (she lost her seat altogether) and Selahattin Demirtas, are in jail.

“The committee's decision should be a wake-up call for members of the ruling Justice and Development Party to start questioning President [Recep Tayyip] Erdogan's heavy-handed tactics and strangling of Turkish democracy and rule of law,” said Aykan Erdemir, a senior fellow at the Foundation for Defense of Democracies and a former member of parliament for the main opposition Republican People’s Party.

He told Al-Monitor, “It took Turkey 24 years to repair the damage of the brutal coup d'etat of 1980, and PACE closed Turkey's earlier monitoring process only in 2004. Thirteen years after that positive decision, it is sad to see Turkey's wasting of more than two decades of democratization efforts and backtracking to the repression of the 1980 junta."

The proposed downgrading of Turkey’s status came as German Chancellor Angela Merkel warned today that Turkey’s approach to democracy and the rule of law “are deeply problematic” to the country’s future cooperation with the European Union.

Since 2005, Turkey has been in formal talks for full membership in the European bloc, but the talks have hit a wall over the divided island of Cyprus, an array of reforms that Turkey has failed to deliver on and, above all, over the EU’s own resistance to admitting a large Muslim country.

Merkel also took aim at Erdogan’s weekend salvos that Germany was reliving its "Nazi" past, saying these were “completely out of hand.” Erdogan's comments were in response to a decision by the German authorities to cancel rallies in Cologne and Gaggenau in support of Erdogan’s proposed super-presidency due to worries about overcrowding. “I thought that Nazism was over in Germany, but it turns out that it is still going on,” Erdogan charged.

Erdogan’s drive to formalize the sweeping powers that he already exercises in a planned April 16 referendum are a matter of concern, the PACE Monitoring Committee said. “In light of the established violations of human rights under the state of emergency,” the committee urged Turkey to lift the state of emergency “as soon as possible, halt the publication of decree-laws which bypass parliamentary procedure, and to release all the detained parliamentarians and journalists pending trial, unless convicted."

But Turkish Prime Minister Binali Yildirim told a group of foreign reporters today that this would be extended beyond its April 19 expiration date. “It is certain at this point that it will be extended for another three months,” Yildirim said. “Of course it will not continue eternally,” he added. “We’ve taken care of the situation to a large extent.”