Soccer players from Team Asoosa, in Qayyarah, are rejoicing in reuniting and being able to again play the game they love after their town's liberation from the Islamic State. 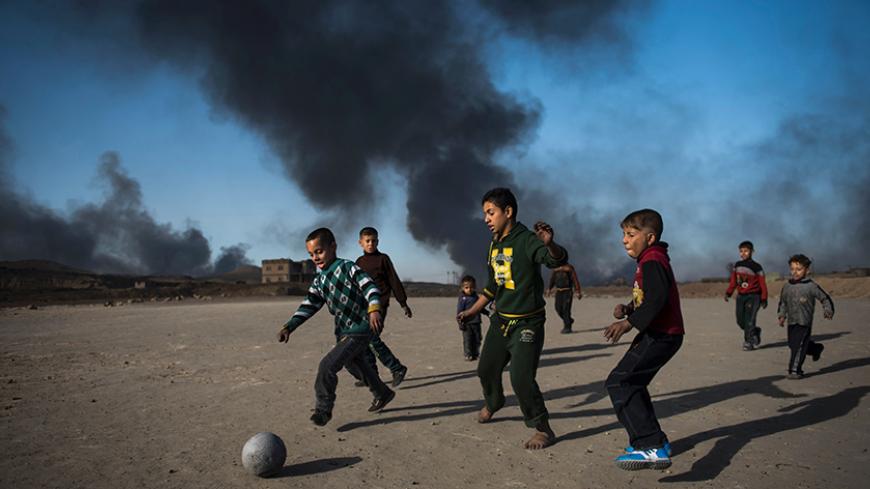 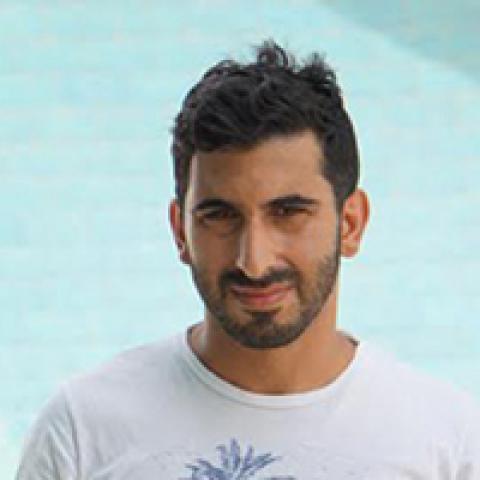 QAYYARAH, Iraq — Clouds of black smoke continue to fill the gloomy-looking sky in Qayyarah, south of Mosul, casting an ominous aura above the land over which they cast a shadow. Islamic State (IS) fighters lost control of the town they once lorded over on Aug. 25, 2016, and in October, when pushed from nearby territory set the oil wells of northern Iraq ablaze in a wretched, last ditch effort to spread even more terror among people who have wanted nothing more than the simple life, including the members of Team Asoosa (Founders Team) football club.

The players — young Iraqi men who for the last few years have wanted to play football on the fields they grew up on — finally began reuniting in February after months as internally displaced persons (IDPs). “You’ll find us here every evening, from 3:30 p.m. until night,” Nadheen Nimr, an Arabic teacher and club organizer, told Al-Monitor. “Next time bring your boots,” Nimr said jokingly, referring to soccer shoes, not the military kind with which they have become all too familiar.

The now infamous smoke turning local sheep black forms the backdrop for familiar makeshift goals, made of jackets and shirts, and the usual arguments over whether a shot was “post and in,” that is, a goal. What is unfamiliar about the scene is the smell of petroleum terrifyingly filling the lungs of all the residents of the area.

Team Asoosa, which competes against other teams in the area, was organized by Nimr, who had been the players' teacher in high school. “They were all great pupils,” Nimr said, “except him, he joked, pointing toward Younes Ahmed. “He was the troublemaker.”

It is obvious that the former students, sporting a motley collection of soccer jerseys, look up to Nimr, his smile a soothing presence despite the surrounding chaos. All the pupils and Nimr had left the school during the reign of IS, after the extremist group threw out the standard curriculum and syllabus, replacing them with weapons training.

“We are so happy now,” said Ahmed, referring to life after IS. “We can go to school. We can go wherever we want. Just being able to talk to you is a freedom we never had.” 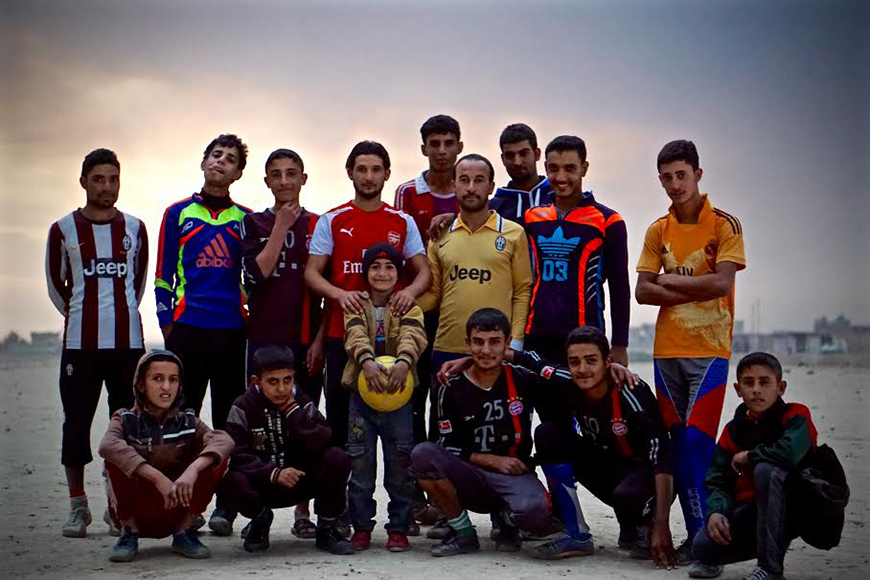 Even playing soccer had been a risk when IS had control. For more than two years, Team Asoosa players lived under constant fear. “We couldn't even be seen wearing these things,” said Nimr, pointing to his shorts. “You know,” he said sarcastically, laughing, “we had to preserve our dignity.”

Mohammed Shahaleh, an English student keen to show off his language skills, interrupted to remark, “We used to play football, but [IS] was a problem for us.” Dressed in a crimson red Arsenal shirt, despite being a Real Madrid fan, Shahaleh said he had lost two years of study.

“Before the call to prayer, we’d have to run away and hide because we’d be whipped if we were caught playing football,” Shahaleh said. He then described how watching their favorite teams on television — a beloved pastime, if not almost a way of life for many young men — was banned.

“We were not allowed satellite dishes or internet to watch football,” he said. “If they caught you, they would punish you. We had to watch in secrecy or be at the mosque. Now I am free.”

Soccer fans were even thwarted by shopkeepers from expressing support for their favorite teams. In the name of monotheism, and the risk of being accused of and punished for idolatry, merchants only sold football shirts with the team logos ripped off.

As the Iraqi army’s offensive ramped up to take Mosul, the ensuing conflict led the majority of Qayyarah's residents — who numbered some 120,000 in 2014 before IS seized the town — to flee for the IDP camp at Debaga, members of Team Asoosa included. Nimr explained how playing soccer with the conflict looming was almost impossible. “The airstrikes would often target groups of men, thinking they were IS fighters,” he said. Another risk of playing was that of being executed by IS for obviously not joining in the battle against the Iraqi forces.

The players spent two months living as IDPs in various camps before reuniting in their hometown and having their passion for footbal instantly reignited. As Nimr rejoiced, “Life is back to normal.”

Playing in a post-conflict zone is not without its dangers. The desert sand topping the fields across the Ninevah Plains also blankets landmines planted by retreating IS fighters.

“We have a friend who, sadly, died while playing football on another field, after he accidently stepped on a mine,” Nimr said. Choosing where to play is done with great caution.

“We are too scared to play anywhere else,” said Nimr, who spoke of how Iraqi Special Operations Forces had cleared the field on which they usually played while conducting searches of the area, because it was where senior IS members lived.

Being able to play football, something taken for granted in most of the rest of the world, is now a symbol of post-IS freedom in Qayyarah, of the simple life. The recently reunited Team Asoosa will be found playing every evening long after the toxic fumes of the burning oil wells have dispersed.