American flag football is growing in popularity in Egypt, especially among women. 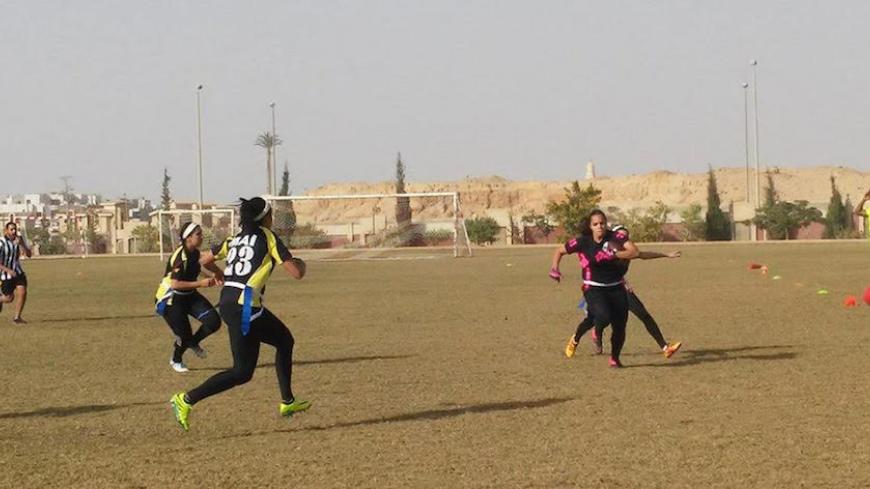 In Egypt, American football is usually thought of as a sport played by heavily padded big men who tackle or overpower each other. Aya Ali, however, sees it from another perspective. That's because she plays defense for the Transforma Pink Warriors, a women's flag football team in Cairo. Ali believes a woman can do anything a man can do.

“Egyptian women are exponentially developing an interest in American football,” Ali told Al-Monitor, before a match in the first women’s football league in Egypt. “Perhaps women are even more passionate and enthusiastic about their favorite sports than men.”

At a sports club on the outskirts of Cairo, a group of about 100 women have dispensed with social stereotypes and joined the first women’s American football league in the Middle East.

The league consists of three teams — the GUC Eagles, Cairo She Wolves and Transforma Pink Warriors — and will be in action Nov. 18 through Dec. 2. Three more women’s teams — the MSA Tigers, AUC Titans and BUE Lynx — are in development and are expected to be launched in the next few months.

Ali said that the women's game has been growing and attracting more athletes and fans in Egypt, especially after the debut last year of the first women's team, the Transforma Pink Warriors. The football players Ayman Mohamed and Samir el-Degway established the team in October 2015. Mohamed said that about 35 women joined shortly after the announcement of the team's formation.

“I had been seeing many Egyptian girls who are passionate about American football, but they did not have a team,” Mohamed told Al-Monitor. “That is why I started Transforma Pink Warriors.” Mohamed, nicknamed “Kalosha” by his players, said that if many more women sign up to play, a national Egyptian American football team could be formed.

Organized American football debuted in Egypt in 2006-07 when a couple of enthusiasts reached out through social media to others interested in the sport. They began meeting up for regular practices and friendly matches. At the time, there was no refereeing or federation.

In 2010, a chain of sports clubs adopted the sport, and three fully equipped teams were organized. In 2014, Egypt was granted membership in the International Federation of American Football. The Egyptian team played Morocco that year in the African qualifiers for the 2015 World Cup and lost by a score of 26-6.

After the qualifier, the Egyptian Federation of American Football (EFAF) was established, as many wanted an organization with a proper system of management that would also play a role in bettering society through sport and its values. The EFAF currently has 12 teams: 8 for men (6 established, 2 under development) and 6 for women (3 established, 3 under development), with 500-600 registered players. Ziad Gaafar, an American football coach and managing director of the Cairo She Wolves, said that the sport has the potential to grow even more in Egypt, especially among women.

“Egyptian women love to break the barriers that society puts on them,” Gaafar told Al-Monitor. “In Egypt, there are many hurdles for women who love to play any kind of sport, especially tough ones. That is why they keep smashing those barriers and entering every possible sport, including boxing, racing and soccer.”

The basic rules for American football in Egypt are similar to those of tackle football, but instead of knocking players to the ground, the defense tries to grab and remove a flag or flag belt from the ball carrier to end a down. Asmaa Khalil, a wide receiver for the Cairo She Wolves, noted that although flag football is far less rough than tackle football, it is still quite physical, with body contact and collisions.

Khalil said she was attracted to American football because of its team spirit. “It is not a star game, and this is the best part of it,” she remarked. “It is a team sport. While playing, everyone has a role, and we win if the role is perfectly performed. One mistake by one player can make the whole team lose.”

The American football teams in Egypt are not only keeping their eyes on the ball on the field, but are also looking to broaden their horizons. “We want to have tournaments at the African and Middle Eastern levels first, and then we want to go international,” Khalil asserted.

Egypt is considered one of the more advanced American football nations in Africa and the Middle East. For the 2015 season, four of the six men's teams in the Egyptian National Football League, under the EFAF, had professional coaches from the United States under contract to lead them.

The Cairo Wolves, a men's team, played in the first international match at the club level in Egypt when they took on the Amman Barracudas, from Jordan, and won, 40-20, at Olympic Stadium in the Cairo suburb of Maadi, this past February. In May, the EFAF held the first women’s football match, between the Transforma Pink Warriors and the Cairo She Wolves, also at Olympic Stadium, with the She Wolves winning, 36-33.

Gaafar said that it would be difficult for American football to surpass soccer, basketball and handball in popularity in Egypt. It seems, however, the sport will continue to grow. There are plans for an international match in 2017 as well as for the launch of an Egyptian national team for women.