The Palestinian ministries of Tourism and Endowments are planning to renovate Jericho’s Shrine of the Prophet Moses to boost tourism and revive the economy. 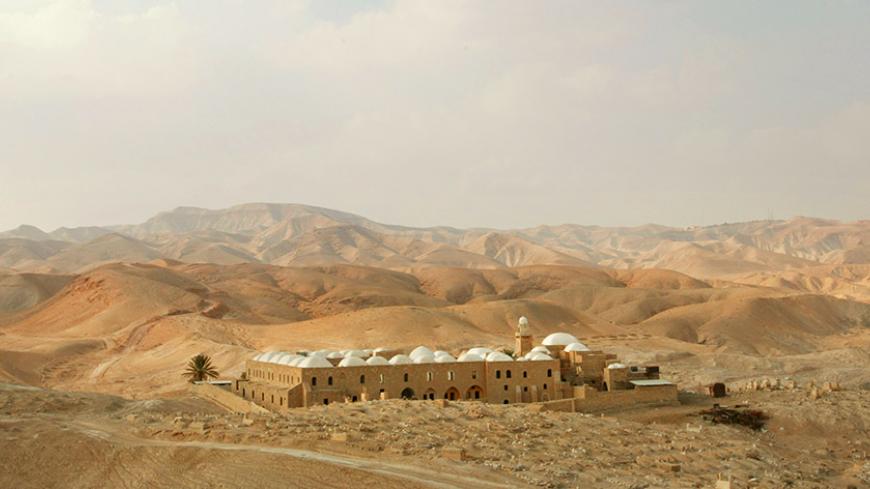 A general view of the Tomb of the Prophet Moses (Nabi Musa) near the West Bank town of Jericho, Nov. 23, 2002. - THOMAS COEX/AFP/Getty Images

GAZA CITY, Gaza Strip — The bidding results for parties who would operate the Tomb of the Prophet Moses (Nabi Musa) near Jericho are expected to be announced March 28, according to the Religious Endowments and Affairs Ministry.

The Palestinian Tourism Ministry launched restoration and rehabilitation activities of the tomb Feb. 26 in cooperation with the Religious Endowments Ministry, which owns the shrine. The works aim to turn the site into a hotel destination and attract more tourists.

The shrine consists of three floors, a sanctuary that includes a mosque and what some believe to be Moses' tomb, corridors, horse stables and guest rooms. The two ministries are bent on operating the shrine for the first time in the framework of a partnership between the public and private sectors, by turning the deserted guest rooms into hotel rooms and by welcoming guests, opening a restaurant in the corridors, and by establishing two meeting halls, workshops and an interactive museum in the surroundings. This would help preserve the shrine’s religious, historical and cultural value, and at the same time increase the number of tourists to the Palestinian territories and help revive the economic situation.

Jihad Yassin, the general director of museums and excavation at the Tourism and Antiquities Ministry and coordinator of the restoration project, told Al-Monitor, “The Prophet Moses shrine is one of the most important in the Palestinian territories because it is a pillar of Islamic heritage and history, cultural and national identity, and global heritage. It was built during the Ayyubid era [1269], and then it was renovated and remodeled in the Ottoman era in 1820.”

Moses is revered by Judaism, Christianity and Islam.

Yassin said, “Although the shrine is still in good condition, as prayers can still be heard there and Arab and foreign delegations visit it during the Prophet Moses season to pray and celebrate, its other facilities are forsaken, especially the guesthouse. The ministry decided to renovate it because the walls were worn down and to revive Islamic tourism and use it as a hotel, shrine and guesthouse, and include it on the World Heritage List.”

Yassin said the shrine is on the road connecting Jericho and Jerusalem and covers a surface area of around 4,500 square meters (roughly 1 acre). He denied claims that the shrine was named after Moses because his remains are buried there; he said the shrine aims only at honoring Moses.

Yassin told Al-Monitor that locals, Arabs and foreigners, especially from eastern Asia, visit the shrine between April 8 and 16 to celebrate the Moses season through prayers and religious festivities.

The renovation aims at expanding the shrine. The public sector would have an oversight role on — while the private sector would manage — the facilities and equip them to welcome tourists.

Yassin said, “In February 2014, the launching of the renovation operations was announced, and we prepared plans to manage the site, restore it and make it operational. The restoration activities began at the end of February [of this year] and are expected to end at the onset of 2018. The project spans four years and will cost 3 million euros [$3.26 million], and the United Nations Development Program will execute it.”

The restoration activities are based on an in-depth study with various parties that wanted to preserve the original nature of the location.

Yassin said a comprehensive plan was developed to operate the shrine. A bidding process began with the private sector, and one organization is to be chosen at the end of March to execute the project. He said the plan includes building 86 hotels, a restaurant and an interactive museum in the surroundings of the shrine, in addition to a workshop hall and a multipurpose room to encourage local and foreign tourism.

He said, “We have referred this plan to the private sector because the public sector alone cannot manage the operations and fund the project. Besides, the government seeks to boost the private sector, offer new job opportunities and revive the economy.”

Yassin said the ministry wants to achieve several goals at the same time. It wants to implement the plans to renovate archaeological sites to preserve them, rekindle their initial role and promote their historical and cultural importance to contribute to highlighting national identity.

Yassin also said, “We will work on preparing promotional plans for the shrine, in partnership with the operating party that will be chosen. In the past two years, the number of Muslim tourists increased. More than 2 million tourists visited the Palestinian territories in 2016, and Turkish tourists visiting the shrine reached 100,000 in 2015, in addition to thousands of other visitors from Arab and Western countries.”

Muhannad Helo, the general director of the Department of Endowments in Jericho, told Al-Monitor that the ministry wants to renovate the shrine to preserve its political significance. Under the Oslo Accord, it is located in Area A, which is under complete security and civil control of the Palestinian Authority. But the shrine’s entrance is in Area C, which is under Israeli civil and security control.

Helo said the only obstacle facing the renovation operations comes from Israel because Palestinian officials constantly need Israeli approval and permits to establish and connect power and water lines and to allow the entry of materials. He denied that there were any technical obstacles facing the project and lauded the skills of the renovators.

Economic analyst Anwar Abu al-Rabb told Al-Monitor that the renovation operations are important in terms of attracting foreign and domestic tourism and in stimulating the Palestinian economy, which largely relies on tourism. He said Palestinian culture abounds with Arab and Islamic gems that offer it a significant competitive asset.

Abu al-Rabb said that political instability in the region has reduced the number of tourists. Most of the tourists visiting the Palestinian territories limit themselves to certain places during the day. Their initial stay is in Israel, where they spend most of their trip. He said tourism's contribution to the gross domestic product remains limited.

However, Abu al-Rabb said Palestinians must not surrender to the political stalemate and instead should find a way to resolve it and to create stability in order to boost tourism. He called for making plans to promote Palestinian historical and archaeological sites at a global level and reiterated the importance of operating the shrine to provide job opportunities and reduce unemployment that was estimated at 26% in 2016 in the Palestinian territories, according to the Palestinian Central Bureau of Statistics.