The Gaza Strip's garment sector, once suffering from war and blockade, seems to be bouncing back. 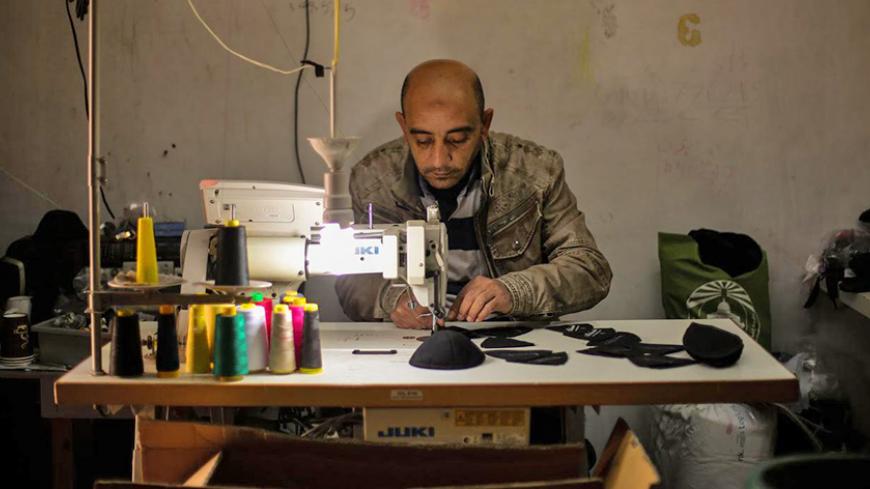 A Palestinian laborer sews a black yarmulke, also known as a kippah, an item of Jewish religious clothing being prepared for export to Israel in Gaza City, Gaza Strip, Jan. 26, 2017. - Mohammed Nehro

GAZA CITY, Gaza Strip — It seems that 2017 is boding well for the garment sector in the Gaza Strip after an eight-year Israeli export ban on garments.

In a narrow alley in al-Shati refugee camp west of Gaza City, Muhammad Abu Shanab's clothing factory has been brought back to life since Israel allowed the export of garments to the West Bank in March 2015.

Following the Israeli closure of all commercial crossings with Israel after the 2007 blockade and the ban on exports of Palestinian-made clothing, Abu Shanab had sold most of his factory’s machines under liquidation. His business is now running again, albeit in a small room and using the few unsold machines he has left.

In March 2015, Israel permitted the first export of clothing from Gaza as part of its gradual easing of restrictions on the Gaza Strip, following the war on Gaza in the summer of 2014.

This allowed clothing factories to raise their productivity and employ more workers. At the beginning of 2017, the number of operating factories jumped from 120 in 2015 to 160.

In a corner of Abu Shanab’s factory, a worker irons the last batch of black Borsalino hats worn by Orthodox Jews, which were ordered by an Israeli trader. He uses a round sponge to facilitate the ironing process, before packing the hats to be exported. On average, the factory exported 200 hats a day in February.

However, Abu Shanab — who is also a board member of the Textile and Garments Union — told Al-Monitor that Israel’s lift of the export ban is not enough, as trading movement is still restricted, limiting communication with traders in Israel.

Given that Israel permitted exportation to the West Bank only, Palestinian traders export their products from the West Bank to Israel, thus bearing an additional cost due to the continued ban over direct exportation from Gaza to Israel.

Abu Shanab said, “Before Israel decided to lift the export ban on [clothing], only 10 workers were employed at my factory, and my products were limited to school uniforms sold at the local market in Gaza. Today, after almost nine years of being prevented from exporting my products, I have 35 workers sewing clothes ordered by Israeli traders or traders from the West Bank.”

He said he was keen on maintaining his relations with Israeli traders even after Israel's decision to cut trade ties with Gaza after the blockade. “I maintained contact with Jewish merchants, regardless of political circumstances. When the export ban was lifted, and due to the mutual trust between us, Israeli traders started once again sending me textiles to be woven in Gaza,” Abu Shanab said.

“Sometimes we do design, and sometimes Israeli traders send us their own designs,” he noted. “After the Israeli closure of crossings, factories gradually stopped working, and most factory owners were unable to collect their financial due from Israeli or Arab traders in light of the tight restrictions on movement. Most trades had to shut down their factories as they sustained huge losses.”

The secretary-general of the Textile and Garments Union, Ziad Abu Audi, told Al-Monitor, “The Israeli decision to allow exportation to the West Bank brought back to life some factories that had collapsed when trade ties with the Gaza Strip were cut in 2007. The clothing and garment sector employed at that time about 35,000 workers in about 928 registered factories.”

He said, “After the Israeli decision to allow export to the West Bank, the number of factories operating in Gaza increased to 160, and they currently employ about 5,000 workers on products intended for export and sale in the local market.”

Abdel Naser Awwad, the director-general of the Department of Industry at the Ministry of National Economy in Gaza, told Al-Monitor, “The Israeli decision is not enough to boost the garment industry,” indicating that Israel is still targeting this sector directly and indirectly by capping exports to the West Bank and prohibiting direct export to Israel, not to mention the targeting of this sector during the repeated Israeli wars.

According to Awwad, the losses sustained by the clothing sector after the Israeli war on Gaza in 2014 reached about $2.5 million, as 127 factories were partially or entirely destroyed.

An owner of a large Palestinian sewing factory in the Gaza Strip told Al-Monitor on condition of anonymity, “Some Israeli traders benefit from the cheap and nearby Palestinian labor market. They send us fabrics or designs and we assemble and sew the garments in return for a fee. We then add the “made in Israel” label so that ready-to-wear items are exported from Israel to other countries.”

Sami Abu Jahl's fatory in Gaza City employed 350 workers before the Israeli blockade. Today, 60 of his workers work on various models of the jilbab (a long, loose, jacket-like garment), since the factory can supply the domestic demand of this Islamic religious outfit.

Under the trademark of “Jump,” Abu Jahl is marketing his product in the local market in Gaza and the West Bank. “We use Turkish designs available online to sew the Turkish jilbab highly demanded in Gaza, and we are using the best quality of fabric,” he said.

Three years ago, the Ministry of National Economy approved a plan to protect locally made garments. The plan was coordinated between the ministry and industry trade unions and chambers of commerce, given that locally produced school uniforms, jeans and jilbabs can cover local demand.

Economic expert Hamed Jad told Al-Monitor that there have been Palestinian attempts to pick up and revive the garment sector and restore its pre-2007 glory, but these efforts have remained limited due to continued political and economic blockades on Gaza.

Jad said government policies allowed the local product to withstand all challenges amid fierce competition from China and Turkey, even as difficult living conditions and the electricity crisis in Gaza increase the sector’s operational cost.

Workers in this sector have their hopes pinned on the government to pressure Israel for more facilities and protection to a sector that managed to thrive before the economic blockade on Gaza.