For the first time in 10 years, a Palestinian sewing company in Gaza exports a shipment of clothes to the Israeli market. 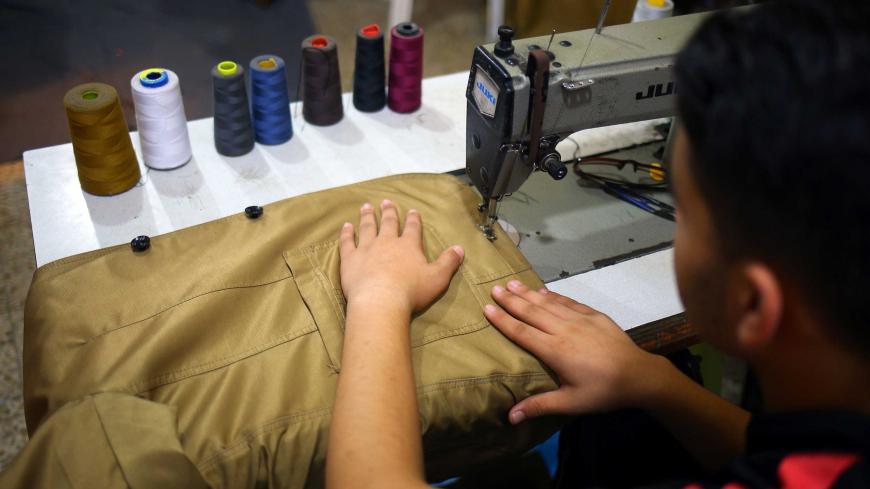 A Palestinian tailor uses an electrical sewing machine during the few hours of electricity supply the residents of the Gaza Strip receive every day, in Gaza City, Gaza, July 26, 2017. - MOHAMMED ABED/AFP/Getty Images

GAZA CITY, Gaza Strip — For the first time since 2007, a sewing company in Gaza has exported a shipment of ready-made clothes to the Israeli market through the Kerem Shalom commercial crossing on Aug. 28.

The Israeli decision to allow this shipment came after meetings and understandings between Palestinian and Israeli trade delegations at the Erez crossing in the northern Gaza Strip on Nov. 23, 2015. The goal was to overcome obstacles to the transportation and marketing of clothing products exported from the Gaza Strip to Israel.

An agreement was reached at the time to allow transportation of clothes from the Gaza Strip to the West Bank to then be transferred to Israel. This came within the scope of the economic and living facilities announced by Israel to the residents of Gaza after the end of the 2014 Israeli-Gaza war. Indeed, this agreement was implemented until Aug. 28, when a shipment of clothes went directly from the Gaza Strip to Israel for the first time since 2007.

Bashir al-Bawwab, the head of UniPal 2000, the sewing company that exported the shipment, told Al-Monitor that the shipment included 3,500 pieces of ready-made clothes for the fall and winter seasons, including 2,100 pieces of long-sleeved blouses and blazers, 800 pieces of jeans and trousers, and 600 pieces of children’s clothing. “This is likely to restore the lost confidence between the Palestinian and Israeli suppliers,” Bawwab said.

According to stakeholders in the clothing sector, the Gaza Strip will be allowed to directly export one shipment of clothing to the Israeli market each week, and this will take effect as of mid-September. The stakeholders told Al-Monitor that the quantities of the next shipments will be the same as of that of the first shipment, with a value between 50,000 shekels (around $14,000) and 70,000 shekels (around $20,000).

Ever since Hamas took over the reins of power in Gaza following the Palestinian division in July 2007, the garment factories stopped exporting their products to foreign markets due to the siege imposed by Israel on the coastal enclave. This caused many sewing factories and companies to close down, as they relied heavily on exporting their products as a major source of revenues.

Ziad Abu Audi, the secretary-general of the Union of Palestinian Textile Industries, told Al-Monitor, “This first shipment of clothes to Israel from Gaza aimed to boost the textile sector in Gaza and was the result of the Union’s tenacious efforts in cooperation with the private sector and the representatives of the Civil Administration and Crossings Department in the Palestinian government in Ramallah. On Nov. 25, 2015, a meeting was held with the Israeli stakeholders in Beit Hanoun [Erez] to revive the garment sector in Gaza, which has suffered over the past 10 years losses over $150 million as factories stopped operating. The number of clothing factories dropped from 400 operating factories in 2007 to less than 110 in 2017, operating at one-quarter of their operational capacity.”

It should be noted that the former head of the Textile and Garments Union in Gaza, Mohammed Abu Shanab, had stated on Dec. 17, 2014, that the losses of the sewing sector since the imposition of the siege on Gaza are estimated at $6 million per month.

“Contacts have been underway between the Textile and Garments Union and the representatives of the Israeli side to make the second shipment of ready-made clothes for the fall and winter,” Audi added, noting that he expects the shipment to be made with the same quantity as the first one by mid-September.

Audi expected this step to boost the vital economic sectors in Gaza, as sewing companies and factories began to order clothing materials from India, China and Turkey. “There are between 20 and 25 factories in Gaza that are ready to supply ready-made clothes to the West Bank and Israel for the fall and winter seasons. The number of factories is likely to rise to 40 a year from now,” he said.

According to statements in 2016 by the head of the Textile and Garments Union, Tayseer Al-Ostath, to the newspaper al-Hayat al-Jadida, in 2000 there were 900 factories in the Gaza Strip employing about 36,000 workers in Gaza, but in 2005 this number had dropped to 400 factories.

Today, the number of garment factories in Gaza stands at 110, with no more than 4,000 workers, operating with limited capacities to meet the needs of the small Palestinian clothing market. Owners of sewing factories hope that they would go back to work after a hiatus of more than 10 years to compensate for the losses they incurred during this period.

In turn, Maher Tabbaa, the head of the relations and media department at the Gaza Chamber of Commerce and Industry, said, “The most important challenges facing the garment sector in Gaza is that countries such as Turkey, China and India are strongly competitive in the Middle East, including the Palestinian and Israeli markets. Their products are modern, fashionable and cheap. This will pose yet another challenge to Gazan owners of sewing factories, pushing them to exert greater efforts to regain the confidence of the Israeli traders and suppliers torn between Gazan products and the products of these countries.”

Tabbaa added, “The Palestinian governments in Ramallah and Gaza are required to support Palestinian traders by lifting customs off imported raw materials and organizing training sessions to rehabilitate workers [in this sector] to be able to show good performance.”