Several international initiatives are trying to aid those industries in Gaza that are suffering from Israel's siege, Rami Almeghari reports. 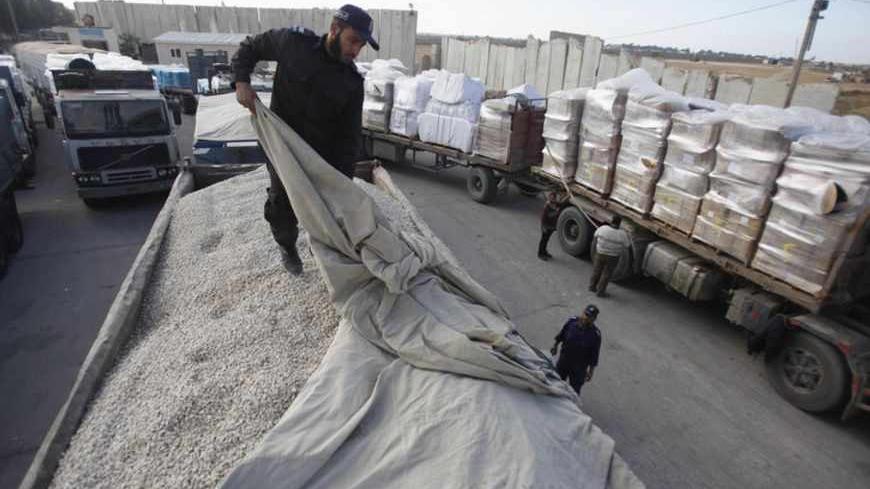 A member of Hamas security forces checks a truck loaded with gravel at the Kerem Shalom crossing between Israel and the southern Gaza Strip, Dec. 30, 2012. - REUTERS/Ibraheem Abu Mustafa

Six years after it was imposed, Israel’s ongoing blockade continues to cause hardships for Gaza-based industries. Despite Israel easing the blockade after the flotilla raid in 2010, Gaza traders continue to face serious hardships, including the inability to bring in raw materials or machinery needed to run factories and warehouses.

"When I need a certain machine to keep my factory running, I go myself to the country from which I ordered that machine and do training there for several weeks, simply because Israel has not allowed experts to come in the Gaza Strip to help us run such machines. This restriction has been in place since Israel enforced its blockade on the Gaza Strip,” Mohammad al-Telbani, owner of a leading wafer and chocolate factory in the Gaza Strip, told Al-Monitor.

Telbani's business hardships have also extended to other significant matters.

"My factory in central Gaza employs about 400 workers and produces almost 75 tons of various types of wafers, chocolate, candy and ice cream per day. In 2006, when Israel launched the first major military attack on Gaza, the factory was forced to stop functioning for about five months. By then, we began facing difficulties bringing in raw materials and machines needed to run our plant,” he said.

The factory has suffered from a lack of equipment needed to keep the business running as well as delays in receiving materials due to the Israeli blockade.

“Once, I wanted to bring in a vital machine, but because the machine had a large metal pipe, Israel refused its entry to Gaza. Before the blockade was placed, we used to bring in a large container of raw materials within 24 hours. But for the time being, a container like this needs about 8 to 10 days, being shipped from an Israeli seaport right to my factory,” Telbani explained.

The chocolate factory currently meets the demands of Gaza’s local market, but the businessman is frustrated at Israel’s hindrance of his ability to export his produce abroad, or even to the nearby West Bank.

"Obviously, Israel's measures against Gaza's economy aren’t related to any security threats that Israel always alleges. Rather, it’s Israel's intention to keep the Gaza Strip undeveloped and unable to flourish economically, and thus become able to defy Israel's illegal occupation,” Telbani said at the Palestinian Union for Industries in Gaza.

Another major industrial facility in the Gaza Strip is the Al-Yazji factory in northern Gaza City, which produces soft drinks and beverages. Naser al-Yazji, owner and director of the factory, spoke to Al-Monitor about the hardships he has encountered over the past six years.

"The Al-Yazji company … has been in business since 1961. It is considered to be the largest such facility in Gaza and the West Bank. Only in late 2010 Israel started easing the blockade, and this has been reflected in us getting more raw materials and machines for our production. We are agents for Pepsi-Cola [International], and since the blockade has been enforced we have not been able to deliver our products to the West Bank. Therefore, we plan to open up a branch facility in the West Bank. Still, Israel does not allow entry of some needed machines like air compressors and packaging equipment," Yazji said.

Khader Shniwra, an official with the Palestinian industries syndicate in Gaza, told Al-Monitor that in the past three years his union has been able to initiate some internationally funded development projects that are helping to strengthen Gaza's industries.

"During the last Israeli wars on Gaza, mainly the 2009 Cast Lead and the November 2012, hundreds of Gaza's industrial facilities were either partially or completely destroyed," Shniwra maintained.

Shniwra also added that some projects were in the pipeline, including a job creation initiative by the United Nations Relief and Works Agency (UNRWA) valued at 9 million euros. The Islamic Development Bank is also donating 7 million euros to a project aimed at rehabilitating some industries, according to Shniwra.

The union official further clarified that although the flow of raw materials and machines has increased since late 2010, Israel is still blocking essential materials.

"There has been some sort of increase of materials entering Gaza, but Israel continues to prevent entry of construction materials, except for those used by internationally funded construction projects, as well as metal materials. Only 350 truckloads enter Gaza through the Kerem Shalom crossing in southern Gaza per day. We have always demanded that the crossing either be expanded or more crossings be opened. All the various goods and materials enter only through the Kerem Shalom crossing, which Israel continues to close frequently."

Under Israel's blockade, more than 2,000 Gaza industries — including the construction, metal, food and plastic industries — have been relying on underground tunnels along the Egyptian border. According to the Ministry of Economy in Gaza, only 30% of 870 garment factories are in operation, while almost all of the 300 food factories in Gaza are running on low capacity.

"We have recently begun applying a new regulation that would govern and organize industries in Gaza—mainly replacement of some imports coming from underground tunnels, such as clothes. We have a plan currently that we would prevent entry of clothes being imported from China and some other countries in order to boost local production. We expect that by this summer at least 50 percent of garment factories will be running in the territory,” Abdelfattah Abu Moussa, director of the industries department with the Gaza-based Ministry of Economy, told Al-Monitor.

Abu Moussa maintained that before the Israeli enforcement of the blockade in 2007, Gaza's industries used to contribute 20 percent to Gaza's GDP.

"All industries in Gaza now contribute less than 7% of Gaza's yearly GDP of $1.6 billion," he said.

But Mohsen Abu Ramadan, a Gaza-based economic analyst, contends that replacing imports is not an effective strategy while the occupied coastal territory still remains dependent on underground tunnels and is under Israel's blockade.

"It is good that the authorities here have begun such a measure, but it’s not guaranteed, simply because of the lack of a sustainable economy in Gaza. What is needed is that both governments in Gaza and the West Bank accelerate reconciliation and establish a solid unified economic system that is based on mutual trade between the West Bank and Gaza Strip. And this requires a genuine political will by the parties concerned,” Abu Ramadan said.

Unless Israel lifts the blockade and allows for normal trade, Abu Ramadan added, the prospects for the development of Gaza’s industries will remain dim.

"Unless Gaza's infrastructure is rebuilt and there is a political solution for the Palestinian-Israeli conflict, Gaza will remain hostage to Israeli restrictive measures and Israeli army actions that are frequent across the Gaza Strip. The persistence of such a situation will never help the Palestinian economy compete,” Abu Ramadan concluded.