During Nowruz this year, the Baha’i community in Iraq has launched a social dialogue initiative to establish a foundation of dialogue and coexistence in all components of society. 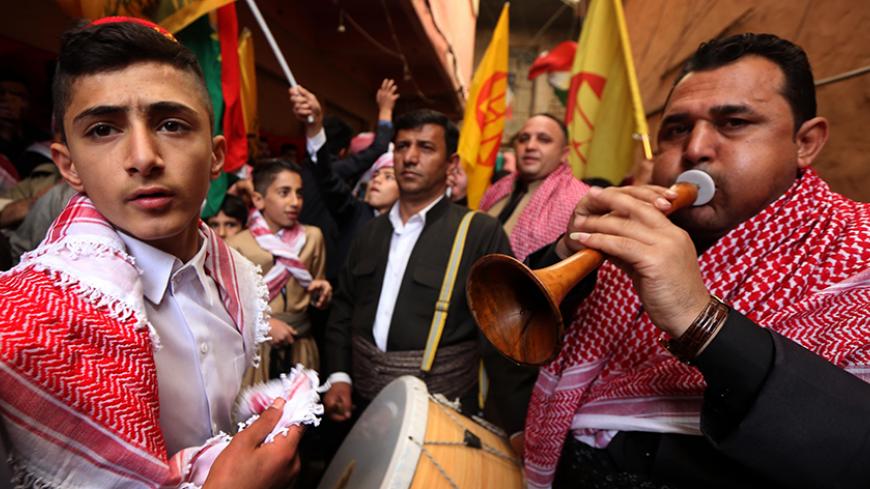 BAGHDAD — Celebrations for religious occasions and holidays in Iraq have lately focused on common grounds of belief among citizens of Iraq. The purpose is to calm tensions caused by ethnic and sectarian conflicts or struggle over power and wealth among political elites.

Nowruz, which represents the new year for Iranians and Baha’is and marks the end of a 19-day fast, took place March 21. The Baha’is have launched a “social dialogue initiative” to establish a ground of dialogue and coexistence in all components of Iraqi society.

The initiative stems from the despair felt in the country due to ongoing conflicts and religious intolerance. The initiative encourages and develops social dialogue in a way that enables Iraqis to work together to reach across the aisle, defuse discord and establish grounds of dialogue and coexistence.

This social dialogue initiative is the first overt activity by the Baha'is in Baghdad after a decadeslong ban on their activities. “This is the first time in 40 years Baha’is could celebrate overtly. Our celebration comes finally after a lifelong ban on our activities under a decree issued by the Revolutionary Command Council during the Baathist era in 1970. Back then, we could not celebrate this holiday with the rest of the components of the Iraqi society,” Diaa Yaaqoub, a Baghdad-based Baha’i, told Al-Monitor.

Yaaqoub added, “By this celebration that comes after decades of an enforced ban, we aim to provide the opportunity to all Iraqis regardless of affiliation. The holiday bridges the gap between everyone despite differences.”

On the importance of this celebration, Aseel Salam, a Baha’i activist and organizer of the celebration, told Al-Monitor, “Nowruz, which starts with Baha month during the March equinox, marks the beginning of the Baha’i year. A Baha’i year consists of 19 months, each of which consists of 19 days. Nowruz marks the end of the Baha’i fast and is also New Year’s Day for Baha’is. We celebrate it on March 21 every year.”

According to several sources, Nowruz is one of the old holidays that is common for several peoples of the Middle East, such as Kurds, Persians and Azeris. The holiday comes in line with the natural transformation in climate as we enter spring, the month of fertility and renewal of life in Asian cultures. However, it also bears different nationalistic and religious connotations for these peoples, as Muslim Kurds consider it a national holiday related to their liberation from oppression, according to Kurdish mythology, while Bahai’s hold it to a spiritual and religious dimension.

Kurds in Iraqi Kurdistan celebrate Nowruz on or around March 21 every year, and the Iraqi government considers it an official holiday. The government of Iraqi Kurdistan offers three days of vacation for all official institutions. Since Kurds consider it a national holiday, it is customary to dress in traditional Kurdish costumes and celebrate outdoors with nature as they perform group dances and join the Kurdish dabke dance.

Sarmad Moqbel, the Baha’i representative in the Ministry of Endowments and Religious Affairs in Iraqi Kurdistan, explained to Al-Monitor the nature of difference between Baha’is' celebration in Iraqi Kurdistan and that of Muslim Kurds in the same region. He said, “At the Baha’i Council in Iraqi Kurdistan, we host celebrations on March 21, where representatives of different religious and nationalist components flock into the council. Moreover, the holiday has a nationalistic nature to Muslim Kurds. However, for Baha’is, it represents a religious nature, but it is not considered a difference as much as it is a celebration with a dual nature that has two sides — nationalistic and religious.”

Some hold that Sabian Mandaeans in Iraq celebrate Nowruz, too, but under the name “Parwonaya” or “Banja.” It extends for five days starting March 17. Tarmida is the second highest religious rank in the Sabian Mandaean faith. Tarmida Nedham Kreidi, the deputy head of the Iraqi Mandaean community in Qadisiyah province, where the central temple of the community is situated, told Al-Monitor, “If it is an old common holiday shared by Iraqis, it shows how Mandaeans are authentic and have origins that date back to ancient times of our nation.”

In his explanation of the religious meaning of the holiday, Kreidi added, “During these days, the Great Living created the worlds of light [heaven], through which the followers of the Mandaean faith conducts baptisms as well as other rituals on the sides of rivers. The five days are important days in the Mandaean calendar, which consists of 360 days, along with five appended days of Parwonaya, which are separate from the calendar for their sacredness and uniqueness. According to Mandaean scripture, rituals could be carried out at day or at night, since these days are blessed ones that no dark, whatsoever, does them apart.”

The celebration of Nowruz in Iraq is an opportunity to focus on the importance of the common roots of many Iraqi cultures and religions. This opportunity allows Iraqis to bridge gaps by strengthening common bonds and reinforcing dialogue and communication. A key example is when Muslims celebrated Christmas with Christians last year, and Christians fasted with Muslims on the last Sunday of last Ramadan.

Activists have been focusing on different religious occasions that occur at the same time by sending messages and launching campaigns that call for a national unity among Iraqis regardless of affiliation. For instance, Edwin Shuker, an Iraqi Jewish activist, posted on his Facebook page on Oct. 2 a recorded video where he congratulated Iraqis on the Jewish New Year alongside the new Hijri year in the Islamic calendar, as a symbolic indicator on the possibility of reaching a Jewish-Islamic rapprochement after decades of hostility and hatred.