The diplomatic crisis between Turkey and the Netherlands shows no signs of letting up, with Turkish President Recep Tayyip Erdogan threatening the Netherlands with sanctions and reporting it to the European Court of Human Rights. 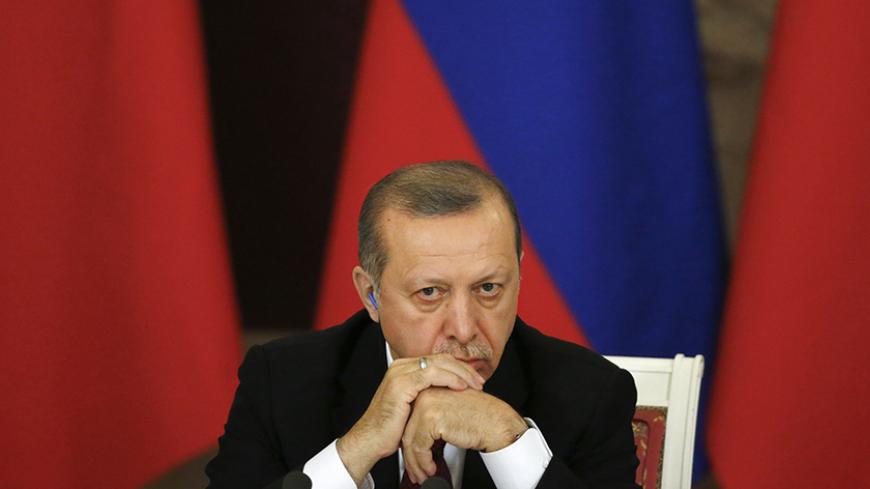 Turkish President Recep Tayyip Erdogan attends a news conference after the talks with his Russian counterpart, Vladimir Putin, at the Kremlin in Moscow, March 10, 2017. - REUTERS/Sergei Ilnitsky

The war of words between Turkey and the Netherlands shows no sign of abating with Turkish President Recep Tayyip Erdogan calling the Dutch Nazi "gorillas” and “spineless and ignoble.”

Erdogan told an audience in Ankara today, “We know the Netherlands and the Dutch from the Srebrenica massacre. We know how rotten their character is from their massacre of 8,000 Bosnians there.” He was referring to the alleged complicity of Dutch United Nations peacekeepers with Serb militia in the Bosnian town of Srebrenica, where 8,000 Muslim Bosnian men and boys were murdered by Bosnian Serbs at the height of the civil war in 1995.

The row between Turkey and the Netherlands erupted over the weekend after Dutch authorities, citing security concerns, denied Turkish Foreign Minister Mevlut Cavusoglu landing rights for a visit to promote voting in favor of the referendum on a super-presidency among the estimated 400,000 Turks who live there. Tensions boiled over when Fatma Betul Sayan Kaya, Turkey’s minister for family affairs, was deported late Saturday night after making her way overland from Germany to Rotterdam.

Turkey announced a smattering of toothless sanctions yesterday to protest the Dutch government's actions, including denying re-entry to the Dutch ambassador to Ankara, freezing all diplomatic communication and demanding a formal apology. Ankara is also threatening to take its case to the European Court of Human Rights. Dutch Prime Minister Mark Rutte, who is seeking re-election in parliamentary polls March 15, said that the sanction were not “too bad,” but also stated that it was Erdogan who should apologize, for drawing parallels between his country and the Nazis.

Erdogan remains unswayed. “Nobody should try to give us lessons in civilization” he thundered before the audience in the Turkish capital. “Their history is dark but ours is clean.”

Such claims of purity must grate, especially among the descendants of survivors of the 1915 Armenian genocide. More than a million Armenians were slaughtered by Turkish forces, many in the Syrian desert, as the Ottoman Empire collapsed at the end of World War I. Turkey has spent millions of dollars in lobbying fees to deny the atrocities occurred but has largely failed in its endeavor. By contrast, the Netherlands formally apologized for its failure to prevent the massacre in Srebrenica and compensated the families of the victims.

There is no need, however, to dive so far back into history for evidence of state-sanctioned violence in Turkey. In a report released March 10, the Office of the United Nations High Commissioner for Human Rights (OHCHR) accused Turkish security forces of massive destruction of property and grave rights violations between July 2015 and December 2016 during operations against Kurdish rebels in southeastern Turkey. The latter included torture, rape and killings. The OHCHR used satellite images and interviews with victims to document its conclusions.

At least 2,000 people died over that period including 800 members of the security forces and 1,200 people who the report said “may or may not” have engaged in violent action against the government. The unrest led to the forced displacement of up to half a million residents in the southeast.

Turkish authorities ignored the United Nations’ repeated requests to grant access to its investigators. Turkish rights groups and lawmakers were similarly barred, allowing security forces to destroy much of the evidence.

Some of the most chilling allegations came from Cizre, an ancient settlement on the Tigris River. The ramshackle town has for centuries been a fount of Kurdish nationalist feelings and punished by authorities for daring to display them. The most recent battering came in 2015, when armed Kurdish youths linked to the outlawed Kurdistan Workers Party (PKK) erected barricades in heavily populated parts of Cizre and recklessly declared “autonomy.” The government response was brutal. Many residents air fury at the PKK for inviting it, a Western journalist who interviewed at least 30 people from Cizre told Al-Monitor on condition of anonymity.

The United Nations said witnesses had described “apocalyptic” scenes of destruction. Entire neighborhoods were reduced to rubble as tanks took aim. Investigators were able to document at least 189 people who had been trapped in basements for weeks without food or electricity. Some were wounded but denied medical treatment, and they all perished in fires triggered by security forces' artillery shelling.

In February 2016, UN investigators spoke to the brother of a woman who had died in Cizre. They wrote, “Her family was invited by the public prosecutor to collect her remains which consisted of three small pieces of charred flesh identified by means of a DNA match. The family did not receive an explanation as to how she was killed nor a forensic report.”

The victim’s sister, who demanded accountability, was slapped with terrorist charges herself.