In order to “close a deal’’ between Israel and the Palestinians, President Donald Trump wants to convene a regional two-state conference later in the year. 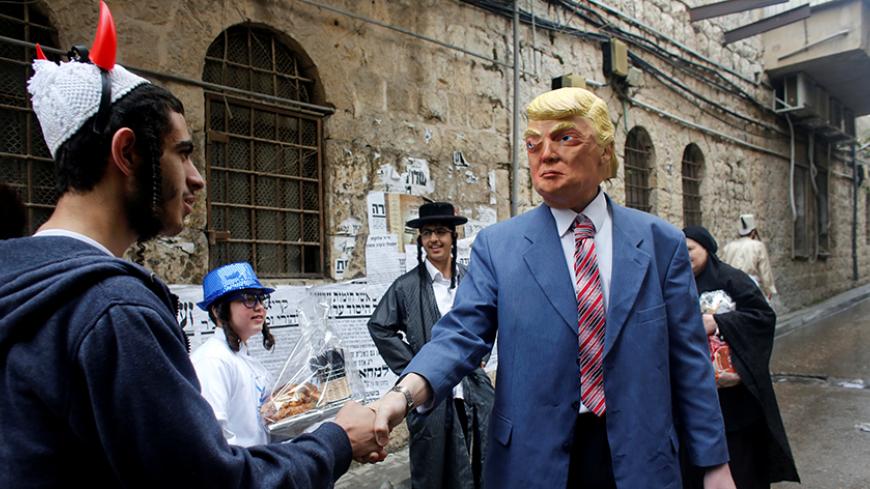 A person wearing a costume of US President Donald Trump shakes hands with an ultra-Orthodox Jewish man during an annual parade marking the Jewish holiday of Purim in Jerusalem, March 13, 2017. - REUTERS/Nir Elias

Ever since US President Donald Trump called Palestinian President Mahmoud Abbas on the phone on March 10, euphoria has prevailed within the top brass in Ramallah. “If Netanyahu ‘heard’ the conversation between Trump and Abbas, he didn’t sleep well that night,” Knesset member Ahmad Tibi (Arab Joint List) tweeted. And Tibi, as we know, enjoys a very close relationship with Abbas.

Palestinians had little hope from Trump, especially in light of the many publications over the wonderful friendship between the president and Prime Minister Benjamin Netanyahu. But perhaps this lack of expectation is exactly the reason why cautious optimism registers now in the Palestinian Authority (PA) Ramallah headquarters.

Trump repeated at least three times in the course of the conversation that what he wants is to achieve a “deal” between Israel and the Palestinians. He personally complimented Abbas and the Palestinian people as well. Trump made it clear that he is not biased to either side and has no prior prejudices, thus instilling hope in the elderly Palestinian leader.

A senior diplomatic source told Al-Monitor that Trump did not utter the words “two-state solution” in the course of the phone call. However, Trump’s various assistants and emissaries made it clear, in their contacts with the Palestinians, that Trump has no other card on his table other than the two-state solution, period.

The appraisal now is that a meeting between the two in the White House will take place in June. According to the phone conversation, Trump is very interested in an internationally sponsored regional conference that will re-ignite the peace process. The conference is expected to be held a month or two after the meeting; in other words, in August or September. Until then, the Trump administration will try to learn the ins and outs of the quagmire between the two nations and formulate a plan that will square the circle and achieve what three US presidents (Bill Clinton, George W. Bush and Barack Obama) failed to achieve: a permanent settlement between Israel and the Palestinians — or, in the words of the new president, a “deal”; in other words, an arrangement that will benefit all parties involved.

The Palestinian side of this conflict — the side that hunkered down after Trump’s election and planned for the worst — breathed a sigh of relief this week. “After we heard the president out, his commitment and approach, we are calmer,” a Palestinian source told Al-Monitor on the condition of anonymity. “This is not a president that will move the embassy [from Tel-Aviv] to Jerusalem. This is a president who understands the situation and will try to achieve peace,” he added.

Even Defense Minister Avigdor Liberman, who held a round of meetings in Washington March 7-8, understands the new situation. It was also made clear to Liberman that, as far as the US administration is concerned, there is no game other than “the two-state game.” Liberman knew this from the very beginning. With regard to the settlements, the US administration told the defense minister that Israel should try to “restrain” itself.

According to Israeli political sources, Liberman has an interesting analysis of the current situation and comparison of Obama and Trump. Liberman said that in the Obama administration era, there were significant disparities between the strategic goals of the United States and those of Israel. However, on the tactical level, there was much cooperation and accommodation. By contrast, in the Trump era, there is absolute agreement regarding the strategic goals of the US administration and of Israel, while there are different nuances when it comes to the tactical level.

What Liberman is referring to is, of course, the issue of the settlements. Jason Greenblatt, Trump’s envoy representative for international negotiations, is currently visiting Israel. He will surely hear on March 13 the Israeli request to authorize Netanyahu to build a new West Bank settlement for the people who were evacuated from the Amona outpost. Netanyahu will say that this is not really about building a new settlement, but only creating one that will replace the one that was destroyed. This is what Netanyahu promised to the Amona evacuees, which paved the way for a relatively quiet evacuation. Now they are waiting to see the prime minister make good on his promise. Education Minister Naftali Bennett and his HaBayit HaYehudi party are also waiting. They already proclaimed coalition “sanctions” against Netanyahu should he violate his promise.

It is doubtful that the Americans will authorize the establishment of a new West Bank settlement. Netanyahu will soon learn the hard way how a narrow right-wing coalition can make it difficult for him to maneuver in the near future.

Liberman presented his long-time diplomatic plan to the US State Department staff, including Secretary of State Rex Tillerson. The plan involves land swaps between Israel and the PA. Liberman is willing to concede Israeli territory populated by Arab-Palestinians in exchange for the settlement blocs.

According to diplomatic sources who were privy to the talks, the US side looked over the program very seriously. When Trump talks about the “ultimate deal,” he refers to a deal that will include not only Israel and the Palestinians, but also additional sides. In this context, it is possible that he will turn back to the triple, or even four-sided, territorial exchange plans that include Egypt and Jordan too. Ancient plans that displayed arrangements based on this model lie waiting in various archives, gathering dust. However, they still contain a real grain of healthy logic.

Trump’s people have, in recent weeks, begun an accelerated course in learning the ins and outs of the history of negotiations between Israel and the Palestinians over the generations. In an earlier stage, between the US elections and the actual entrance to the White House, Trump’s people were indifferent. They had no respect for the previous administration and didn’t really evince much interest in the negotiating rounds that took place between Israel and the Palestinians under Obama. Now, this approach has changed.

A framework agreement summarized by former Secretary of State John Kerry and Netanyahu still lies waiting in the US State Department to this very day. The United States had taken this framework agreement in 2014, improved it, added the explosive sentence “two capitals in Jerusalem” and presented it to Abbas. When Obama later met with him, Abbas had pondered over the document a bit and promised to “return with an answer.” He has not done so, to this very day.

Perhaps this is the time to receive his answer, as a starting point from which to begin.