What does it mean to be a Jerusalemite?

While Israel's Supreme Court recognized Palestinians' continued "resident-native" affiliation to Jerusalem after extended absences, Israel Prize judges gave this year’s award to a person who has dedicated his life to replacing Palestinian residents with Jews. 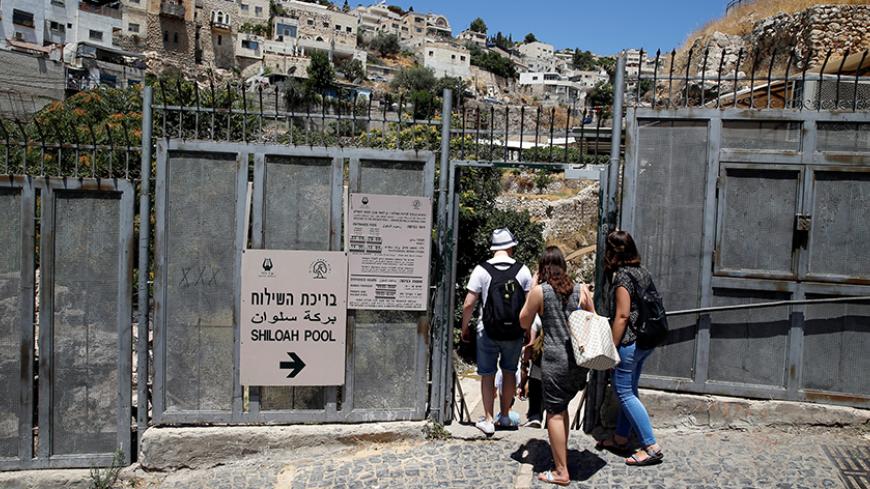 Visitors enter Shiloah Pool, part of an archaeological site known as a the City of David, still an active dig and also a tourist attraction, situated close to Silwan, a Palestinian neighborhood next to Jerusalem's Old City, June 30, 2016. - REUTERS/Ammar Awad

Two contradictory, almost polar opposite events recently transpired in Jerusalem. The first was a unanimous ruling March 14 by three Supreme Court justices — Chief Justice Miriam Naor, Menachem Mazuz and Uzi Vogelman — determining that the right to settle in Jerusalem is not reserved only for Russians, Americans or New Zealanders who have never visited Israel but whose grandmothers were Jewish. Thus, the justices ordered that the state grant the same right to Palestinians born in Jerusalem who have lived for extended periods in Moscow, New York or Auckland. The court defined the status of such Palestinians as “resident-native” and determined that their affinity to their homeland obliges the Interior Ministry to grant them permanent residency upon their return.

This precedent-setting ruling resulted from an appeal filed by Akhram Abdel Haqq, a Palestinian born in East Jerusalem in 1959, eight years before it was unilaterally annexed to Israel, in 1967. Abdel Haqq was 12 when his parents immigrated to the United States, and after he returned to Jerusalem in 1989, the Interior Ministry refused to reinstate his residency. Included among the some 14,000 Palestinians whose residency has not been restored since 1967 are those who moved from the city to the West Bank for family reasons and students who returned to their city after completing studies abroad. Their right to residency expired, Israel claimed, because the center of their lives had moved elsewhere for seven years or more. The claim that their parents and grandparents had been born in Jerusalem did not stand them in good stead in light of the semi-official Israeli policy of “Judaizing” Jerusalem, or in less refined, blunter terms, weeding out non-Jewish residents to make way for a Jewish majority. The Abdel Haqq decision could be welcome news for thousands of other Jerusalem-born Palestinians whose residency requests were rejected.

That leads to the second newsworthy event, which also involves a decision by judges. The panel that selected this year’s recipients of the Israel Prize for Lifetime Achievement is closely tied to the policy of thinning the non-Jewish population of East Jerusalem. The prize committee announced on March 16 that Israel’s most prestigious award would be given to David Be’eri, the founder and director of Elad, a nongovernmental organization dedicated to creating a Jewish majority in Arab neighborhoods of Jerusalem. Explaining their decision, the panel members wrote that Be’eri had been selected based on his “contribution to the state in single-handedly establishing a national enterprise — the City of David. … He initiated, founded, led and still leads this blessed activity that has turned the City of David into a national and international heritage, education and tourism site of the first order. The City of David is the historic kernel from which Jerusalem grew — the heart of the Jewish people and the focal point of the Book of Books [the Bible].” The City of David is an archaeological site and settlement near the Western Wall that some believe was the original core of Jerusalem.

The Israel Prize was awarded to Be’eri “on the 50th anniversary of the unification of Jerusalem,” the committee wrote. Indeed, who better than Be’eri to represent the version of unification embodied in the policy pursued by successive Israeli governments since 1967 of creating a Jewish majority in the city by weeding out the Palestinian residents? A 2009 report by Ir Amim, an organization seeking to ensure the “dignity and welfare of all Jerusalem residents,” reveals the methods by which the East Jerusalem neighborhood of Silwan was populated by Jews and turned into the “City of David,” named after the biblical king or Be’eri.

The Jewish National Fund and Hemanuta, a subsidiary of the Jewish National Fund, reached an unwritten agreement with Be’eri that he would identify properties that had been owned by Jewish families in Silwan in the early 20th century, and the fund would take action to evict the Palestinians who had lived in them for decades, recovering the properties for the state. The Jewish National Fund would then rent or lease these evacuated houses to Elad for token fees, without a tender process, for an unlimited period of time. Elad in turn rented the properties to Jews or Jewish establishments. In contrast, Palestinian families who fled their homes in West Jerusalem during the 1948 war are not entitled to compensation under any program.

Be’eri claims that all his property purchases were conducted legally and with the agreement of the Palestinian residents of Silwan. Moreover, in an interview with the NRG website in 2008, Be’eri said, “There is great trust between us. These are not just circumspect relations; these are truly excellent neighborly relations.” In October 2010, Be’eri was documented running over two young Palestinians who were throwing rocks at his car as he drove through Silwan. He claimed that a group of young neighborhood residents had attacked him with stones, and he “feared a lynch.”

Elad’s overriding message is “This is where it all began.” Hundreds of thousands of Israelis and tourists, school children and soldiers who tour the archaeological site — the number is estimated at some 400,000 visitors a year — are told that this is where the Jewish nation came into existence. This is what gives the Jews overarching, preferential rights to Jerusalem.

Archaeologist Yonathan Mizrachi is the director of Emek Shaveh, an Israeli NGO that works to protect ancient heritage sites as the public assets of all communities. Following the decision to award Be’eri the Israel Prize, he wrote that Be’eri had managed to sear the City of David into Israeli minds as a place of mythical dimensions, much greater than it was. According to Mizrachi, the site is nothing more than a mound of antiquities whose dating and significance are unclear. “Those who tour the site with an Elad guide,” Mizrachi wrote, “are treated to an emotional, even spiritual experience, where religious texts and traditions shed light on the antiquities, creating a 3D time tunnel that seals itself into the consciousness of every Israeli.”

Binyamin Ze’ev Kedar, chairman of the Israel Antiquities Authority and quoted in the Ir Amim report, said that the authority was aware that Elad, “an organization with a declared ideological agenda, presents the history of the City of David in a biased manner.”

An officer with the army’s education corps information unit told the Ir Amim researcher that the unit thought it was important to present Jerusalem’s three religions to those touring the site, but, “They [David Be’eri and his colleague Dvir Kahane of Elad] insisted only on Judaism. You could not pick.” Another officer from the unit said that he had undergone training by Elad, stating, “They talked only about the Jewish narrative. They didn’t mention the Palestinian residents, as if they jumped over 2,000 years of history.”

So there are judges in Jerusalem — the Israel Prize for Lifetime Achievement judges — who think that making life miserable for Palestinian residents of Jerusalem merits a lifetime achievement award. There are also judges — Supreme Court justices — who believe that all those native to the city have the right to a good life there.