Could 'regional deal' be behind Israel's government crisis?

Following the annual Arab League meeting in Jordan this past weekend, Egyptian President Abdel Fattah al-Sisi will bring up the issue of the Arab Peace Initiative in his upcoming meeting with US President Donald Trump. 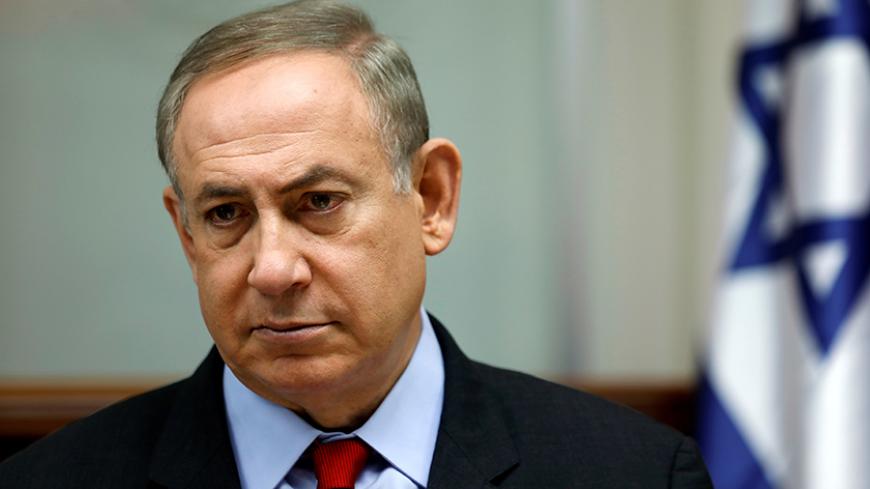 Israeli Prime Minister Benjamin Netanyahu and Finance Minister Moshe Kahlon have been swapping verbal blows in recent days over the scheduled launching of the Israeli Public Broadcasting Corporation (IPBC), with Netanyahu threatening to call early elections if the unborn corporation is not dismantled. But is public broadcasting the real reason behind this commotion?

Actually, there are as many suppositions regarding this latest political crisis in Israel as there are pundits. Some say Netanyahu fears that the soon-to-be-launched IPBC is teeming with leftists and rivals. They also claim that the decision to appoint Geula Even-Saar as the broadcaster’s prime-time news anchor was the final straw for the Netanyahu couple. Even-Saar, a respected TV newswoman, is married to former Minister Gideon Saar, one of Netanyahu’s archrivals in the Likud Party.

Some believe Netanyahu wants to move up the elections, scheduled for 2019, to head off possible recommendations by the police and decisions by Attorney General Avichai Mandelblit to indict him, as police are conducting probes on several affairs allegedly involving Netanyahu.

Haaretz Editor-in-Chief Aluf Benn surmised that the crisis over the IPBC is nothing but camouflage for deep-seated disagreements with the United States over freezing West Bank settlement construction. He assumes this is Netanyahu’s escape hatch from the devilish choice between the romance with his buddy, US President Donald Trump, and the forced partnership with his domestic rival, pro-settlement HaBayit HaYehudi Party Chairman Naftali Bennett. Trump is demanding that he curb construction in the settlements, while Bennett threatens to bus the settlers to the ballot boxes in droves and bring to an end the hold on power by Netanyahu and his Likud.

This writer suggests a different and far deeper interpretation of the looming political crisis. The “regional peace” formula — that hollow formula that Netanyahu likes to use to fend off critics of his inactivity on the peacemaking front — is hanging over his head and threatening to lift him out of power. On March 29, the initiative is once again enjoying a resurgence at the Arab League Summit in Amman, where the Arab Peace Initiative of March 28, 2002, is being debated anew. Arab states have for years been awaiting an official Israeli response to their proposal to establish normal ties with Israel in return for its withdrawal from the territories it captured in 1967, and an agreed-upon and just resolution of the Palestinian refugee problem based on United Nations Resolution 194.

On April 3, right after the Arab League Summit, Egyptian President Abdel Fattah al-Sisi will head for his first meeting with Trump at the White House. He is expected to tell his host that there is broad Arab consensus regarding the decisive contribution of ending the Israeli-Palestinian conflict to the campaign against Trump’s nemesis, radical Islam. Sisi, speaking on behalf of his friends in the leadership of the Arab world, is supposed to ask Trump to exert his influence on Netanyahu in order to get him to renew negotiations with the Palestinians and pave Israel’s way into a pro-Western Arab-Israeli coalition.

Sisi can cite former Mossad Director Tamir Pardo, who said at a March 21 conference, “The shockwaves in the Middle East have spawned an understanding by all the countries of the region that the State of Israel is strong and that an alliance with it is a strategic asset that could enable prosperity and a response to recurring threats in the region.” Speaking at the Netanya Academic College conference in memory of the late Mossad head Meir Dagan, Pardo noted that for the first time there is a congruence of interests, perhaps a one-time occurrence, between Israel and pragmatic Arab states against Iran.

The appearance of a responsible and creative Arab leadership assumes prominence against the backdrop of an irresponsible and anemic Israeli leadership. On March 23, Zionist Camp co-leader Tzipi Livni said that already several years ago she had heard from members of the Arab League committee monitoring the progress of the Arab initiative that the plan was open to discussion. Livni told participants of a conference held by the Mitvim Institute at the Hebrew University’s Truman Institute that she had heard this from members of the committee with whom she met in Cairo in 2006, when she served as foreign minister in the government of Prime Minister Ehud Olmert. She said they asked that Israel present its views on the initiative; yet they have never heard back from Israel on this issue.

Livni’s recounting contradicts the Israeli-accepted version claiming that the initiative was an inviolable Arab dictate. What’s more, four years ago, at the end of a meeting with then-Secretary of State John Kerry, an Arab League delegation expressed its willingness to consider amendments to the 1967 Israeli border lines and land swaps between the Palestinians and Israel. A senior diplomatic source who spoke on condition of anonymity told Al-Monitor that Arab leaders had made clear on various occasions that implementation of the initiative was not conditioned on negotiations with Syria, which is mired in a civil war.

A year ago, Sisi and Jordan’s King Abdullah II issued an invitation to Netanyahu to join a secret meeting in the Jordanian Red Sea port of Aqaba in an attempt to advance the regional option. Netanyahu took part in the meeting and promised to issue a positive public Israeli government response to the Arab Peace Initiative, adding that to that end he would invite opposition head Isaac Herzog, the head of the Zionist Camp, into his government, thus bypassing objections by pro-settlement parties and creating a broad political supporting platform for a diplomatic initiative. Instead, he opted to keep the right-wing camp while pretending that the regional peace plan was indeed his priority. Last fall, an additional Egyptian attempt to revive the initiative fell through in the wake of internal political considerations that left Herzog on the opposition benches.

Last December, the Arab states and the Palestinians removed the barrier of “recognition of Israel as a Jewish state,” created by Netanyahu. They welcomed Kerry’s six-point road map without reservations. The second point calls to “fulfill the vision of UN General Assembly Resolution 181 [Partition Resolution] of two states for two peoples, one Jewish and one Arab.” Kerry used the term “Jewish state” in his December 2016 speech no fewer than a dozen times.

Judging by Trump's remarks at his joint Feb. 15 news conference with Netanyahu, Sisi will be barging into a wide-open door at the White House. Trump talked enthusiastically about a "great deal" that would include many states and large territories. Netanyahu said he was waiting impatiently to discuss this major deal with the president. It appears that since then, the most powerful man in the world is stuck in retail haggling with the prime minister of Israel over small areas in the West Bank settlements. But Netanyahu knows that Trump is also the least expected man in the world. When Arab leaders will bring him a good deal, he will not push them away. And that is sufficient cause for concern in the official residence of the prime minister in Jerusalem, as well as the private Netanyahu residence in the villa community of Caesarea.