Two young men from the Gaza Strip established their own circus schools to teach children and amateurs the art of circus, as a way to express themselves under siege. 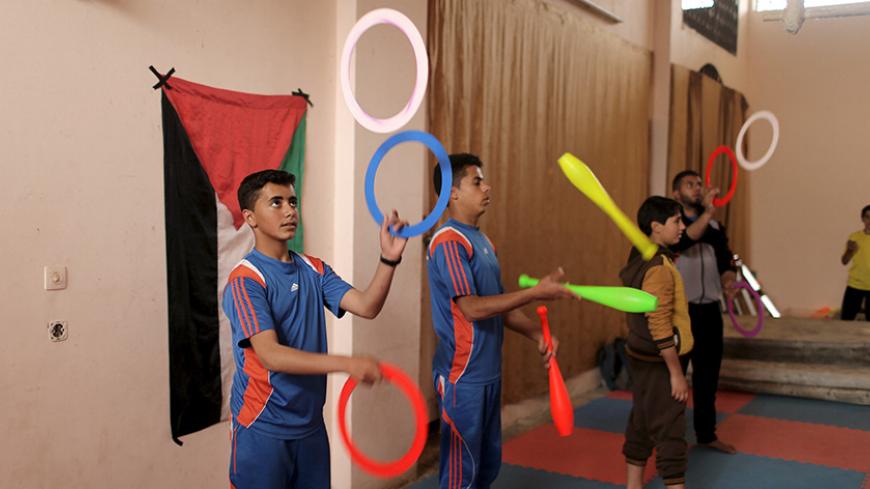 Members of Gaza Circus School practice juggling with clubs and rings in a garage in the northern Gaza Strip, April 8, 2016. - REUTERS/Ibraheem Abu Mustafa

GAZA CITY, Gaza Strip — In the densely populated neighborhood of Shajaiya in eastern Gaza City, several children gathered in front of the Gaza Circus School as they watched trainers teach circus arts to children. Only a few recreational areas exist in the Gaza Strip, and the school, which is the second of its kind in Gaza, is struggling to get a local license and develop its activities.

Ever since he was a child, Ahmed Mushtaha, 29, has been passionate about circus arts, and since his graduation from the department of physical education at Al-Aqsa University in Gaza in 2008, he has been seeking to create a local team that teaches circus arts to children. In 2011, the Belgian Al-Jabal Foundation offered circus arts training to 15 young amateurs, including Mushtaha, to promote the establishment of a circus school in Gaza.

In 2014, Mushtaha established the Gaza Circus School in a garage of roughly 180 square meters (1,937 square feet). Locally trained staff teach circus arts to groups of children between the ages of 8 and 15 using modest tools; a long piece of cloth is hung in the middle of the garage, where children are taught gymnastics and acrobatics with the use of limited sports equipment.

Mushtaha explained that trainees only pay a nominal fee to cover the garage rent. In 2015, the rent was fully covered through donations by several institutions and individuals.

He told Al-Monitor, “After the three training sessions we received from the Belgian Al-Jabal Foundation in 2011 and 2012, I dreamed of creating this school and offering circus arts training to children.”

As Areej Ayoub, 8, worked on her flexibility, a group of children did gymnastics. Ahmad Ayoub, the girl's father and a fitness instructor at a local club in Gaza, told Al-Monitor, “I noticed my daughter was very agile since she was little, and I am glad that this school offers her the chance to develop this further.”

He added, “I searched for a place that would cultivate the talent of my child, but to no avail. Then I learned about the Gaza Circus School and trainer Ahmed promised to train her. Now she can be introduced to global training programs through the foreign delegations that offer training here, and I hope she will have the chance to train abroad.”

Mushtaha had a hard time finding appropriate circus equipment. “I tried to find circus equipment in Gaza but could not find any. I didn't even find equipment for the balance training, so I came up with an alternative to allow trainees to practice balancing moves. In the market I bought a plastic tube that was intended for sanitation purposes, and I turned it into a balance beam after I placed a wooden bar on it,” Mushtaha said.

He added, “Through social networking sites, we are working on connecting our school to activists from around the world in a bid to spread the school's activities. We often receive equipment and financial support from individuals traveling to the Gaza Strip."

Despite the school’s attempt to obtain the necessary license from the concerned ministries, no official bodies have thus far taken the initiative to support the establishment of the school. “Both the Ministry of Youth and Sports and the Ministry of Culture refused to give us a license, and some of the staff at the Ministry of Culture mocked us when we submitted our papers arguing that there is no legal forms for the registration of circus schools,” he said.

Ahmed Muheisen, the undersecretary of the Ministry of Youth and Sports in Gaza, told Al-Monitor, “The ministry is concerned with supporting these schools as they constitute an outlet for children, and we have no problem with the licensing of these schools.”

Muheisen added, “The ministry, however, is going through a difficult stage, and this limits its ability to significantly support some sports activities. Also, we cannot provide technical and networking support to sports bodies nor supervise them when they have no licenses.”

In 2011, Majid Kalloub, 25, founded a circus school in Beit Lahia in northern Gaza after he received training from the same Belgian foundation. His school consists of 15 trainers whom he personally trained. However, Kalloub adopted a different approach from Mushtaha’s; he opted for more networking with international institutions to provide financial support to the children and offer them free training.

Kalloub also named his school the Gaza Circus School, which is run in a similar way as Mushtaha’s school. However, Kalloub's school has more trainers and offers more varied activities due to partnerships with many international institutions, including the Italian CISS Foundation, the Irish institution Taking Flight and several circus activists.

He told Al-Monitor about his suffering amid the lack of any governmental support. “In October 2016, both the Ministry of Youth and Sports and the Ministry of Culture prevented us from performing a circus show on the grounds that two women were part of it. One of them was Irish. Despite our persistent attempts to persuade the ministry that the girls’ uniforms were decent — with one of them playing the role of a clown and was hence dressed in loose clothes — we only got a license to perform when the two girls were dismissed. The show took place without the two girls.” Kalloub said.

Kalloub noted that he is currently working to legally register his school as an “association” dedicated to teaching circus arts, one that is licensed by the Ministry of Youth and Sports in Ramallah, the West Bank. He is also seeking to register it in the Gaza Strip so it can easily perform its various activities.

Kalloub received a scholarship to study circus arts at the Spanish Carampa School in Madrid, Spain, and he now has skilled trainers from Spain train his team in Gaza.

Shadi Zmorrod, the director of the Palestinian Circus School, which is based in Jerusalem and aims to connect local circus schools to international circus schools, told Al-Monitor, “Through our work in the West Bank, we are connecting all the circus teams to each other and making sure they attend international festivals; we found it important for the emerging schools in Gaza to attend such festivals. But the Israeli authorities refused to grant [Gaza] circus members permission [to travel] to receive any training or take part in shows.”

He added, “The teams could not leave Gaza, which prevented them from training with local and international institutions that we have partnerships with. These include the Roundhouse institution, the French XY company and the small circus of Nablus, among others.”

Despite all the financial difficulties related to the harsh economic situation in the Gaza Strip and the poor governmental performance, Mushtaha and Kalloub are determined to move the activities of their circus schools forward as they dream to perform in different European countries. According to them, circus performance is a fine art that can convey a people’s message in a humorous way to the world.