The only circus school in Gaza is popular with patrons, and performers say they've gained confidence and friends from the experience. 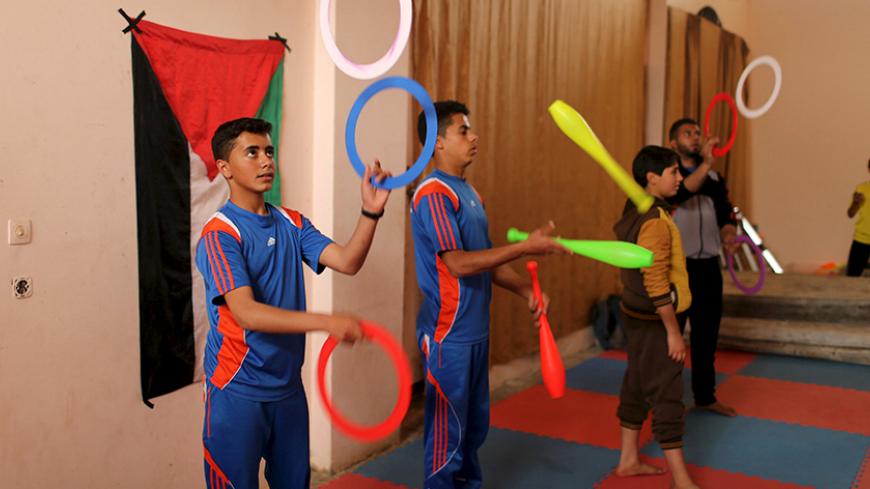 Members of the Gaza Circus practice juggling with clubs and rings in a garage in the northern Gaza Strip, April 8, 2016. - REUTERS/Ibraheem Abu Mustafa

BEIT LAHIA, Gaza Strip — A street cleaner during the day and a circus acrobat at night — this is the life of 25-year-old Youssef Khoder.

It's not unusual for young Palestinians in the Gaza Strip to work in public sanitation. What is odd, however, is for young men to work as circus acrobats. Temporary jobs are based on six- or three-month contracts provided by the United Nations Relief and Works Agency for Palestine Refugees or civil society institutions for the unemployed.

Khoder seems satisfied with both his jobs. “Today, I took the broom and started performing some acrobatic moves with it, which made my [sanitation] colleagues laugh,” he told Al-Monitor.

He has little regard for how Gazan society views him, in either job. “I love my job as a street cleaner. I live off this job. But I am also thankful that I have the work of the circus in my life, as it has rid me of negative energy and made me interact with people in a positive way,” he said.

It's not all positive, though. Khoder also described how he is sometimes "beaten" and tugged on by children and adults when he puts on the clown and other character costumes. Everyone wants to gauge how real the character is.

Khoder was trained for acrobatics at the private circus school, which is the only one of its kind in the Gaza Strip. He is older than his colleagues, but says he feels very flexible when he steps up to the trapeze and flies through the air. The school includes 20 other young people, who perform acrobatics, juggling and rope walking.

One of the trainers, Muhyi al-Hilou, told Al-Monitor, “They come every day except during their exams. They are trained for free, and they perform without any payment in return. They enjoy spending time doing their hobbies and making people happy.”

Certainly their performances aren't the same as Cirque du Soleil, given their poor equipment and lack of enough props such as colorful circles, long rods and aerial silk. They train in what looks like a spacious garage with a high ceiling. The annual rent is $1,200, which is donated inconsistently by friends and some European circus schools. The school is located in Beit Lahia in northern Gaza, where the jugglers and acrobats live except for one: Ibrahim Abu Nada, 19, lives in Zeitun in eastern Gaza. Abu Nada juggles with three balls.

“I had heard a lot about the circus school," Abu Nada told Al-Monitor. "Ever since I went to the Egyptian circus in Gaza four years ago, my dream was to become a circus performer."

Mohammed Obeid, 22, climbed up the aerial silk until he was able to touch the ceiling, while his friends gave him a round of applause. “I am originally a gymnast. I joined the circus because I can perform acrobatics and other strength performances, given my flexibility,” he told Al-Monitor.

Indeed, Obeid seems to have mastered the acrobatic performances. Although it has been only four months since he joined the circus, he looks professional and has already put on many shows.

Majid Kalloub, the school's founder, was adjusting the boys’ positions during the training. Before the school was founded, he said, they were just a small group, trained at the hands of international circus trainer Babou Sanchez in the Belgian Al-Jabal Institution, which was hosted by the Qattan Foundation for Children in 2011.

There had been two circus workshops until 2012, when Israel banned the Belgian delegation from the Gaza Strip without explanation.

“However, this did not stop us. We have taught the others what we learned, and we also checked out some moves online. The young men who are standing here today used to be children back then. We continued training and performed in schools and hospitals without having a place where we could train,” Kalloub told Al-Monitor.

He said that things improved when the members of the circus school became partners in the Spanish Carampa circus school in 2013 and received training from the schoolteachers when they visited Gaza the same year. The Spanish school provided them with tools and juggling material in addition to other equipment offered by institutions and friends who helped them to finally rent a place for their school.

As might be expected, some members said their parents weren't thrilled with the idea of their children joining the circus. Sharaf Muslimi and Assem Omar, both 17, and Asil Abu Halub, 16, said when they decided to join the circus in 2011, they were told, “The circus is good for nothing.”

However, the parents changed their minds once they saw the children perform. They were even proud, the students said.

Mohammad Muslimi, Sharaf’s twin brother, told Al-Monitor that the circus was a turning point in his life. “I used to feel like an outcast at school, but after I learned juggling and acrobatics in the circus, I became more self-confident and I made a lot of new friends. I perform acrobatic moves in front of them that no one else can perform, and now I feel like I am somehow famous among them,” he said.

Mustafa Omar, 19, a trampolinist, told Al-Monitor he dreams of becoming an international circus performer, which might be his best bet, rather than just hoping for a proper circus tent in Gaza for their shows.

Khoder no longer has time to entertain his colleagues with the broom, as the circus school is in demand to perform at festivals and celebrations.

With all their makeup and escapades, it can be hard to tell whether the circus folk are truly happy. But it's obvious that with his juggling, acrobatics and clowning, Khoder brings joy to other people’s hearts.