For decades, Egyptian women have been banned from serving as judges on the country's State Council, but a recent parliamentary initiative gives them a glimmer of hope. 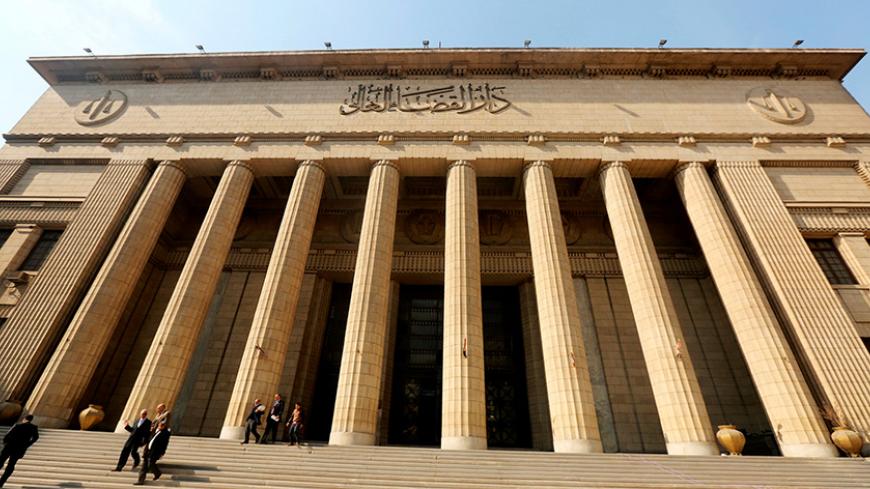 CAIRO — Women have long been banned from holding judgeships in Egypt's State Council, the administrative court system, but a recent legislative initiative offers them a glimmer of hope. The Egyptian parliament has been wrangling with the State Council since March 8, when legislator Suzy Nashed announced the legislature's intention to submit a draft law that would force the council to appoint female judges. The State Council is the only judicial institution in Egypt that does not welcome female judges.

Women’s battle against the State Council began in 1952, when Aisha Rateb, a lawyer, filed suit against the council, calling for the appointment of women to judicial positions. Rateb took the step after the State Council announced its need for assistant delegates, relatively low-level positions, but refused to appoint her. The State Council held that the time had not yet come for women to occupy judicial positions. Although Rateb lost her suit, she succeeded in serving in other senior positions and became ambassador to Denmark and minister of social affairs and security in the 1970s.

In 2003, Tahani el-Gebali became the first female judge appointed to Egypt's Supreme Constitutional Court. In 2007, 30 women judges took oaths before the head of the Supreme Judicial Council, Muqbil Shaker. Even as most judicial committees agreed to appoint female judges, the State Council continued to deny them entry.

In 2010, State Council head Muhammad al-Husseini issued a decision approving the appointment of women judges to the council, but the move infuriated the rest of the council, and its general assembly voted down their appointment. In the ensuing controversy, Justice Minister Mamdouh Marei sent a letter to the Supreme Constitutional Court to seek its advice. The court said in March 2010 that the council has the right to make its own policy on the matter.

The State Council formed a three-member committee to examine the Supreme Constitutional Court's decision and develop a course of action, ultimately agreeing on four items, which included delaying the appointment of women as judges, but affirming the right of women to be hired for technical positions provided there are no Sharia, constitutional or legal constraints preventing it. Yet despite this theoretical affirmation, the committee noted that there were practical constraints preventing women from assuming such positions for the time being.

The council's attitude toward women sparked controversy again when the 2014 constitution was being drafted. Article 11 states, “The state grants women the right to hold public posts and high management posts in the state and to appointment in judicial bodies and entities without discrimination.” Since the constitution's approval, no female judge has yet been appointed to the State Council. After Nashed announced her draft legislation on the appointment of women judges, the National Council for Women approached her, and they agreed to cooperate. The national council has promised to provide legal assistance.

Nashed told Al-Monitor, “In the coming days, I will put the final touches on the draft law that will force the parliament to intervene to implement the constitution, stop discrimination against women and settle the historical battle against the presence of women judges’ at the State Council.”

She further stated, “Women in parliament support this draft law and will see to its approval and implementation. The work of judges is not difficult for women. In many countries, women have enjoyed huge success as judges. The draft law is a demand from women that must be realized in 2017, especially with President Abdel Fattah al-Sisi declaring 2017 the Year of Women during his meeting with members of Egypt’s National Council for Women in March 2016.”

Nashed continued, “The rationale of biological factors to forbid women from being judges is unreasonable. Women in Egypt have occupied high positions, such as cabinet ministers, and succeeded. Why didn’t their biological makeup stand in their way then?”

Former State Council adviser Adel Farghaly told Al-Monitor, “The law and constitution are not against women’s appointment as judges in judicial committees, but social norms and traditions, and the nature of women's role in the East prevent, them from being judges. Egyptian women are the foundations of their families, and judges dedicate their lives to their work. How can women be both at the same time, juggling work as a judge and their families and homes?”

Farghaly continued, “Women in Egypt are bound by tradition, which makes their jobs as judges difficult. Some rituals and measures that judges abide by do not suit women. For instance, judges stay in the deliberation room for more than 15 hours sometimes. Can a woman accept being among a group of men behind closed doors all this time, considering that this is not accepted in our conservative society? Can she spend all that time away from her husband and children? The judge in the State Council visits all provinces, and such would be hard for women.”

He concluded, “No law can force the State Council to appoint women, as it can refuse or accept it as it sees fit.”