All the world's a stage when it comes to social media, and a new TV series points out why that can be dangerous, while at the same time entertaining Egyptians and garnering high ratings. 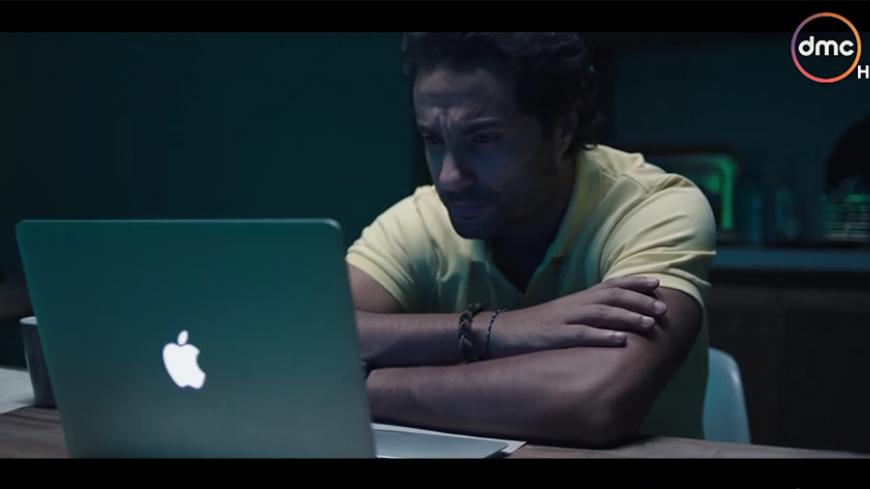 Malek, played by Karim Fahmy, in a scene from the first episode of "Ekhtyar Egbari." Posted Jan. 17, 2017. - YouTube/dmc

CAIRO — A new TV series, "Ekhtyar Egbari" (Arabic for "Compulsory Choice"), confirms that social media is no longer just for socializing. Facebook and the like are providing fodder for a dramatic production.

DMC channel launched the series in January on TV and online, and tracking through the end of February shows it has high ratings, especially on YouTube. Several of the 30- to 45-minute episodes hit more than 300,000 views on YouTube within a few days. These ratings are especially strong considering the show isn't a special aired during Ramadan, when people binge on TV series during the fasting month.

The first season, packed with 60 episodes, ends April 5. Early episodes aired while the final ones were still being filmed. Syrian-Argentinian actor Firas Saayed wrote in a March 6 blog post on Facebook that filming was to finish March 9. Series director Khaled Hilmi said in a Feb. 14 press statement that writer Hazem Mitwali was already beginning work on the second season with Tunisian director Majdi al-Samiri and the production companies, Aroma and Radio One Studios.

The series also addresses the political risks of social media in the hands of some dubious civil society organizations. The story of Mansour’s daughter and his partner's only son depicts these risks. Other characters' story lines show how social media relationships can lead to crimes and adultery.

Despite its popularity, the show has some critics. A Feb. 12 review on al-Modon website described the series as an attempt to scare the audience away from technology using the same rhetoric the state used after the January 25 Revolution in 2011. The review said the series seeks to expose the danger of using social media in mobilizing against political regimes. The review also mentioned a Jan. 17 blog post by Egyptian TV presenter Salma Sabahy, which read, “'Ekhtyar Egbari' is a good series. It scares people! Technology and future generations seem scary! God protect our children so that we know how to contain them, deal with them and teach them right.”

However, film critic Nader Adli told Al-Monitor that any artistic production focusing on young people’s affairs, mainly social media and communication technology issues, is important in cinema and drama. He noted that showing the risks just serves as a warning, not an endorsement that they should be banned or that people shouldn't use them. Adli said, “Cinema and drama reflect a certain point of view and aim at drawing attention to issues without imposing their opinion.”

He added that "Ekhtyar Egbari" benefits from social media. “The youths’ remarkable interest in social media and its perks has created collective public interest in the series. The production team reflects an attractive image of social media society to the youths by showing Facebook and WhatsApp messages between the characters the way they appear in reality, and by using their language [slang] as well as emoticons. As a result, the people watching are able to relate to the series," he said.

In the first, lawyer Mohammad Hamed Salem is on a quest to ban Facebook and Twitter. Salem claims foreign intelligence — which he did not specify — uses these two websites to incite violence and vandalism and called them a source of negative rumors against the state. The court rejected his call and has postponed a ruling on his appeal several times. Judicial sources told Al-Monitor on condition of anonymity that the ruling most recently was postponed until April 2.

In the second case, the administrative court on Feb. 28 turned down a demand by lawyer Hussein Hassan to halt the Ministry of Interior’s surveillance of social media networks. The ministry had announced in 2014 a project to detect the security risks of social media. The project included measures allowing the ministry to buy the necessary software and equipment to monitor the personal accounts of social media users in Egypt.

Ahmed al-Otaifi, an independent information technology and telecommunications expert, told Al-Monitor, “Generally, modern communication methods hold several risks. Some online pirates are able to hack people’s accounts on social media and intrude into their personal lives. Any person can communicate with someone across the globe through social media, even if that person has a criminal record that might harm them. Besides that, any person can spread a rumor to millions through social media.”

He added, “Banning websites is not the solution. The solution is to raise awareness among the youths and develop their minds regarding the proper usage of technology and to help them distinguish between harmful information and good information. We should also alert them to be cautious when writing any piece of information that might become a rumor and to take special care when connecting with strangers.”

It seems that experts and judges are also concerned about the wave of social media and communication technology depicted in "Ekhtyar Egbari." Nevertheless, the series might just raise enough awareness about technology's risks to help rectify its use and end calls for a ban.