Egyptian President Abdel Fattah al-Sisi might propose that President Donald Trump meet with the Arab Quartet in order to advance the two-state solution. 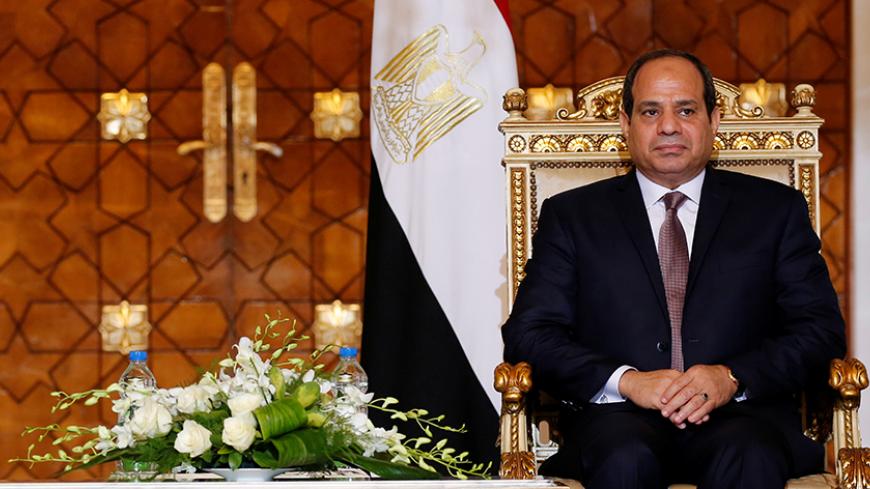 Egypt, the informal leader of the Arab world, is again championing the inter-Arab policy decision-making process. An Israeli official from the Foreign Ministry’s political research center told Al-Monitor on the condition of anonymity that Cairo has been holding intense deliberations with the Arab League, Saudi Arabia, Jordan and the Palestinian Authority in view of the upcoming meeting between US President Donald Trump and Egyptian President Abdel Fattah al-Sisi. The official noted that the deliberations focus on the strategic approach to be presented at that meeting.

From the Egyptian side, the agenda for the meeting should include the rise of Shiite power in the region as a result of increased influence by Iran and its surrogates, the Iran deal, the fight against the Islamic State (also in the Sinai Peninsula), the Palestinian-Israeli two-state solution and last, but probably most important, the level of American aid to Egypt on the backdrop of hints by Trump about cutting assistance to Middle Eastern countries.

The Israeli official emphasized that in these strategic deliberations, Sisi is considered to be a key figure for future Arab relations with the Trump administration. Sisi himself accords great importance to the coordination with Trump, with whom he believes to have a good rapport.

In Cairo’s view, the two men who best understand the Arab world in the US administration are Secretary of Defense James Mattis and new national security adviser Lt. Gen. Herbert Raymond McMaster. Both men gained this understanding of the Arab world during the war in Iraq.

A senior Egyptian diplomat in Tel Aviv also confirmed to Al-Monitor the existence of such deliberations. He said on condition of anonymity that Egypt will hold to its traditional national positions regarding the fight against terror and the Palestinian issue and will defend them with pride. Egypt will not change its stand, even if confronted by pressure concerning US aid. “We believe that the current level of aid is an American strategic interest related to our common interests in defeating terror,” he noted, referring to the $1.3 billion security assistance the Egypt receives annually from the United States.

The diplomat emphasized that in this context, it is essential for Cairo to coordinate a common position among the pragmatic Sunni countries on all relevant issues. He added that there is optimism in Cairo regarding the coordination with Washington on the issues of fighting terror and on Iran, as the Trump administration’s outlook on these issues is perceived to be closer to the Egyptian outlook than that of the Obama administration.

It is clear to Cairo that with the change of administration, the Arab countries must crystalize their strategic views and policies for the future of the region. One policy plan designed to achieve this purpose is convening the Arab Quartet (Egypt, Jordan and Saudi Arabia, with either the Arab United Emirates or the Arab Gulf Cooperation Council). The Quartet would formulate a joint position on a two-state solution to be presented to the United States and to the international Mideast Quartet (United States, United Nations, European Union and Russia).

The Egyptian diplomat said that participants of the Cairo deliberations raised the idea that in his upcoming meeting with Trump, Sisi should propose a meeting of the president with the Arab Quartet. Egypt wants the Israeli-Palestinian conflict resolution process to move away from the American-Israeli coordination track, or even from internal Western coordination, which in recent years have all been nonstarters. The pragmatic Sunni axis should now have a say on this.

On the Palestinian issue, Trump’s message supporting a regional negotiation framework was well-received in Cairo. In this vein, the thinking is also to propose a meeting between the Arab Quartet and the international Quartet in relation to two issues: regional anti-terror efforts and the Arab Peace Initiative.

The Egyptian leadership has also heard the echoes coming from Ramallah about an effort to establish a Palestinian-Jordanian confederation as part of the Arab Peace Initiative. According to the Egyptian diplomat, Egypt would not object to what he defined as more general confederative ties between Jordan and Palestine — as long as these don’t enter into sensitive identity issues such as the status of Palestinian refugees in Jordan, the Palestinian right of return, the status of East Jerusalem and the status of Muslim holy sites. A more loose confederation could have the ingredients of free trade, joint security, joint parliamentary sessions and a common effort to resolve all permanent status issues with Israel.

Such creative ideas are of importance. Paradoxically, they are emerging as a result of the change in Washington — the Arab world must make up its mind at a time when the United States under Trump does not intend to “rescue” the region.

Yet given the leadership in Israel, it is very doubtful that even more realistic initiatives will come to fruition. Alas, instead of new initiatives, one can see on the horizon more diplomatic stalemate and violence.