The House Foreign Affairs panel is expected to take up the bill promptly, but its fate is uncertain in the Senate. 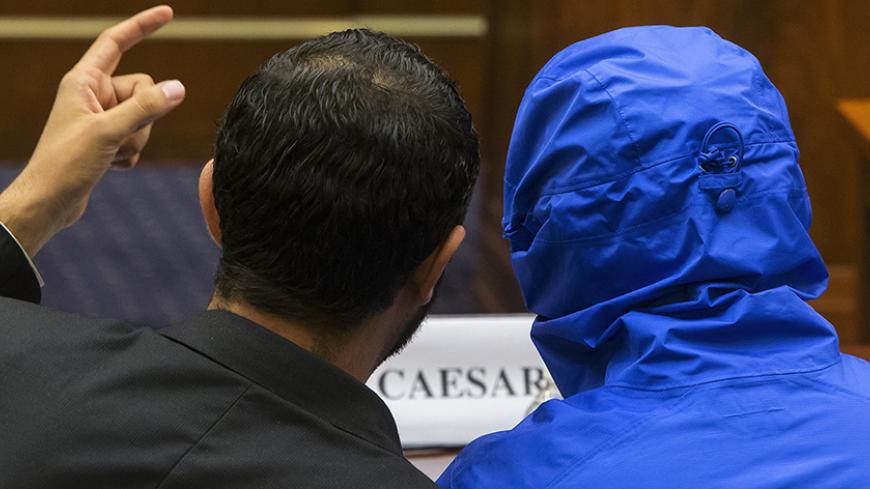 The man credited with smuggling 50,000 photos that appear to document Syrian government atrocities, a Syrian army defector known by the protective alias "Caesar" (disguised in a hooded blue jacket), listens to his interpreter as he prepares to speak at a briefing to the House Foreign Affairs Committee on Capitol Hill in Washington, DC, July 31, 2014. - REUTERS/Jonathan Ernst

The US House reintroduced bipartisan sanctions on Syria on March 22 as the bloody conflict enters its seventh year.

The bill from Rep. Eliot Engel, D-N.Y., passed the House by voice vote in November and is expected to rapidly clear the House Foreign Affairs Committee. Its fate is less certain, however, in the Senate, where key senators will want to put its own mark on the legislation.

"After six years of brutality, we have to jolt this bloody crisis out of its status quo," Engel, the top Democrat on the foreign affairs panel, said in a statement. "The Caesar Syria Civilian Protection Act would impose new sanctions on anyone who does business with the Assad regime — going after the money, airplanes, spare parts, oil, military supply chain and Assad’s enablers that drive this horrific war machine.”

The bill is named after a Syrian military photographer who fled the country, taking with him thousands of photographs that appear to document widespread torture and executions by President Bashar al-Assad's regime. House lawmakers and staffers of both parties met with Caesar in Washington just hours before the bill was reintroduced.

The bill would notably slap sanctions on countries that support Assad, such as Russia and Iran. It also encourages negotiations to end the conflict and supports prosecution of war criminals.

The Barack Obama administration sought to delay the bill last year amid negotiations over a Syria cease-fire. The Donald Trump White House has so far stayed out of the fray, House and Senate aides said, either because it doesn't have any concerns with the bill or is unaware of its existence.

The bill largely mirrors last year's effort with several tweaks, notably the addition of a section authorizing reconstruction and transition assistance. The section appears to be aimed at getting buy-in in the Senate, where Sens. Marco Rubio, R-Fla., and Bob Casey, D-Pa., have filed Syria legislation that authorizes seed funding for a Syria Reconstruction Fund.

It may not be enough, however.

"We're interested in figuring out a way to punish Assad," Senate Foreign Relations Committee Chairman Bob Corker, R-Tenn., told Al-Monitor. "We don't know that what's been laid out is actually the right way to do so."

"Last week, I met with Syrian doctors who endured barrel bomb and chlorine gas attacks as they treated thousands of people in eastern Aleppo. Earlier today, I met with Caesar, whose incredible testimony three years ago provided stark evidence of the atrocities being committed by Assad and his backers. Both Caesar and these brave doctors stressed that this slaughter will continue across Syria until Assad and his backers are held accountable," Royce said in a statement. "That is why I am joining Rep. Engel in reintroducing legislation to impose new sanctions on Assad’s war machine. This bill, which passed the House unanimously last year, will give the US much-needed leverage to help stop the slaughter of more innocent Syrians.”