Everyone wants to know what's coming next in Syria — but it is hard enough to figure out what is going on right now. 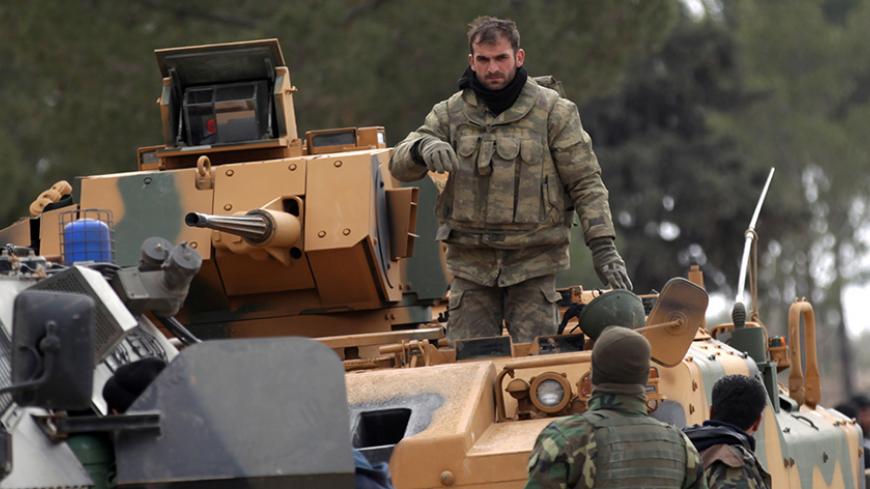 Turkish forces and members of the Free Syrian Army are seen at al-Baza'a village on the outskirts of al-Bab, Syria, Feb. 4, 2017. - REUTERS/Khalil Ashawi

Following Turkey’s path in the war against the Islamic State (IS) in Syria is extremely confusing. One cannot even rely on high-level officials’ statements regarding developments on the ground.

For instance, Gen. Hulusi Akar, the chief of general staff, is the highest Turkish official in uniform. As he was traveling Feb. 15 with President Recep Tayyip Erdogan in Qatar, Akar announced that the operation in al-Bab was over. He said Turkish forces and their Free Syrian Army (FSA) allies had retaken the town. There was every reason to believe the statement, since it was a military matter and the statement came from the highest military authority of the country.

Yet the next day, Defense Minister Fikri Isik said in Brussels that al-Bab “is not taken, but is under the siege” of Turkish forces.

Turkey's highest general says one thing in Qatar; his civilian superior says something else the very next day in Brussels.

Further compounding the disarray among senior Turkish officials about the actual situation in al-Bab was Foreign Minister Mevlut Cavusoglu, who said in his Feb. 19 address to the Munich Security Conference that Turkey was “about to take back” al-Bab.

After winning al-Bab, Turkey and its allies in the anti-regime FSA "can take back Raqqa together," Cavusoglu said, referring to the city IS considers its Syrian headquarters.

So, is al-Bab in Turkish hands or not? Has IS lost one of its most important strongholds in northern Syria or not? Statements by the defense and foreign ministers were more accurate than the chief of staff's.

On the other hand, the Syrian Observatory for Human Rights on Feb. 17 said IS fighters are still in “full control” of al-Bab. I have not yet seen any reference to the London-based organization in the Turkish media.

A columnist from the nationalist and far-right Yenicag daily newspaper in Istanbul scrutinized the official statements, highlighting the contradictions. Citing his own anonymous military sources, Ahmet Takan wrote Feb. 18 that there had been not the slightest military progress in al-Bab in 10 days.

“Perhaps Gen. Akar, while making those remarks that al-Bab is under Turkish military control, was not aware that the FSA allies of the Turkish Armed Forces were forced to retreat and [IS] retook all those positions in al-Bab that it had earlier lost to the Turkish army."

So Turkey hasn't maintained, or apparently even gained, control of al-Bab — which is a mere 18 miles from the Turkish border — even with Russia's blessing and, to an extent, military support. Yet Turkey approached the United States and committed itself to the liberation of Raqqa, asking the United States to dump the Syrian Kurdish People's Protection Units (YPG) for the task.

The United States, on the other hand, told Turkey it should develop a “plan B." Isik said US Chairman of the Joint Chiefs of Staff Joseph Dunford was dispatched to Ankara to discuss options.

Isik said US Defense Secretary James Mattis reassured Turkey that the Kurdish cantons in northern Syria cannot be connected with each other, a possibility that Turkey is determined to prevent. A Defense Department news release about the meeting, however, did not mention the Kurds at all.

Turkey has two alternate proposals, according to the daily Hurriyet, based on sources at the Turkish General Staff.

The first proposal does not sound plausible, because it envisions the Turkish army moving from al-Bab to Manbij and ultimately to Raqqa. Without control over al-Bab, it would be nearly impossible to march to Raqqa.

It is easy to see why, according to a November policy analysis from the Washington Institute For Near East Policy: “Even if the Turkish army and its rebel allies conquered al-Bab, they would still need to travel another 180 kilometers [about 110 miles] and cross the Euphrates to reach the IS capital [Raqqa]. Assuming the [regime of Syrian President Bashar al-Assad] and its allies permit such a long thrust into Syria (not a given, of course), there are no readily accessible bridges on the western part of the river. … On both sides of Lake Assad, the ground is flat without physical discontinuities, allowing movement beyond the roads if need be. Yet this would force Turkey to further expand its lines of communication, making it more vulnerable."

The analysis continues: "The length of the hypothetical campaign could be a formidable obstacle as well. Assuming that al-Bab falls as fast as Manbij did (two months), and that Turkish-led forces progress at a relatively constant rate (roughly 15 kilometers [9 miles] per month, based on two months to seize the 30 kilometers [18 miles] between rebel territory and al-Bab), it could take another twelve months to cover the 180 kilometers to Raqqa.”

The second alternative plan — Turkey's preferred approach — is moving to Raqqa from Tell Abyad in the north, some 62 miles away. This would allow Turkish forces to proceed through largely empty territory and without the natural barrier of the Euphrates River. This proposal to the United States envisions a line of 12 miles to allow the Turkish army to march to Raqqa.

That plan would divide the territory controlled by the YPG and the US-supported Kurdish nationalist Democratic Union Party into two. Actually, this is the gist of the Turkish proposal: dividing the Kurds so Turkey can provide support to the United States to liberate Raqqa. In fact, Ankara doesn't just want to prevent the two Kurdish cantons east of the Euphrates River uniting with the one on the west (Afrin); it wants to also separate the two cantons on the east.

The big question is whether the United States will go for that plan. A military force that is unable to maintain control over al-Bab even with some Russian support cannot be an asset for taking Raqqa, which is a far more formidable task.

However, the game in Syria is as much political as military, if not more so, with Russia established as the main power broker and Donald Trump as the US president.

Would Trump turn his back on the Kurds to appease Erdogan in Turkey? That remains to be seen. Until then, Turkey is dancing delicately on the Syrian stage: fighting al-Bab with Russia and trying to make plans with the United States for Raqqa, at the expense of the Kurds.

In all this fog of uncertainty, one thing is clear: Developments in Syria will determine, to a large degree, Turkey's future.