A shaken and polarized Turkey desperate for good news has been elated by a happy ending to the story of a puppy trapped in an Istanbul borehole. 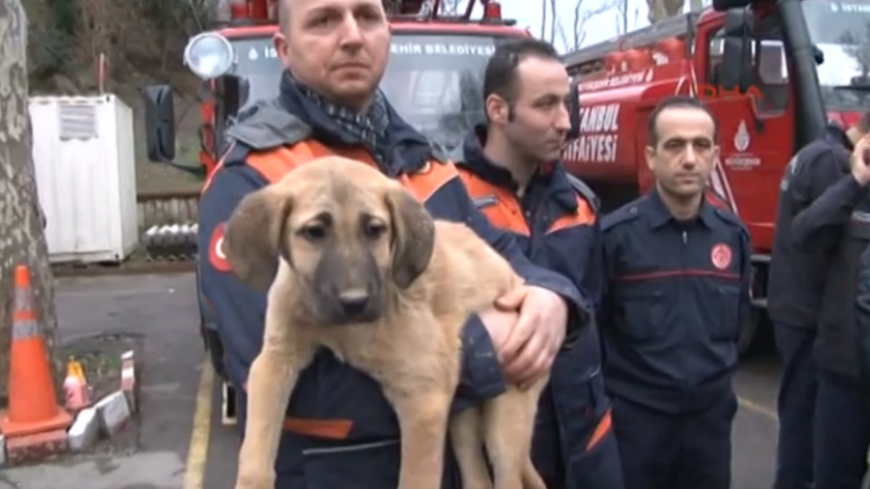 A puppy that was rescued after 10 days stuck in a well is seen in a video still with firemen who played a part in his rescue in Istanbul, Feb. 15, 2017. - YOUTUBE/linetv bursa

In a country starved for happy news, the story of a marooned puppy has offered welcome respite from the steady drip of terrorist attacks that have shaken Turkey and helped remind a deeply polarized nation that compassion and human kindness still exist.

It all began when residents of Beykoz, a verdant neighborhood skirting the Bosporus’ Anatolian shores, first heard the whimpers. They soon discovered the source.

A puppy had fallen 70 meters (230 feet) to the bottom of a borehole, and it was too narrow for any human to squeeze through to retrieve him. Professional help was needed, so the people reached out to the Disaster and Emergency Management Authority (AFAD), the government-run disaster relief outfit that is globally hailed for its work with earthquake victims and more recently with millions of Syrian refugees. For 10 days, AFAD struggled to get the puppy out, using thermal cameras to monitor his location. Images showed a brown Anatolian shepherd with a black muzzle and big anxious eyes. He was adorable.

Animal lovers and rights groups rushed to the scene. The nation waited breathlessly as news of the puppy’s plight spread via social media and national TV. The public began referring to the pup as “Kuyu” or “well.” The hashtag #DirenKuyu, “ResistWell,” began to trend on Twitter.

The dog seemed healthy, but he would need to lose weight to be lifted out through the neck of a hole so narrow that it seemed incredible he fell through at all. Thus the puppy was fed sparingly while the team grappled with ideas to extract him.

As hopes began to flag, President Recep Tayyip Erdogan’s son-in-law, Energy Minister Berat Albayrak, intervened. Albayrak ordered the Turkish Coal Institute to dispatch its rescue team to the scene. Based in the Black Sea province of Zonguldak, which is home to Turkey’s biggest coal mines, the group has honed its skills during deadly earthquakes and mining disasters that recur with tragic frequency.

The men used a technique said to be devised by a Turkish high school student: They fashioned a lasso from a long steel coil through which they threaded a rubber hose. They dropped it down the hole and over the puppy’s head, but the terrified animal wriggled free. Hours later, when the puppy fell asleep, they tried again and succeeded. Kuyu was pulled out this morning amid loud cheers.

Veterinarians who had been standing ready rushed to give him oxygen and fluids. He was swaddled in a pink tartan blanket. Hearts melted. Bystanders jockeyed to smother him with kisses.

“The baby dog’s salvation reminded us of the value of hope and toil, of Allah’s mercy and of the beautiful side of humankind,” tweeted Yildiz Ramazanoglu, a prominent Islamist theologian and feminist. “Thanks to all those who took part.”

Others injected politics into the moment. “Be it a wounded dog or a wounded country, whatever falls to the bottom of a pit can only be salvaged through science, technology and education,” tweeted Radikal columnist Can Gurses in an apparent swipe at government efforts to discredit evolutionary theory.

Amid the blaze of publicity, Kuyu has found a new forever home: the Beykoz fire department.