Erdogan presses for 1.5 million new jobs ahead of key vote

Faced with a worsening economic downturn, Turkey’s president scrambles to achieve some improvement, even if transient, ahead of a critical referendum in April. 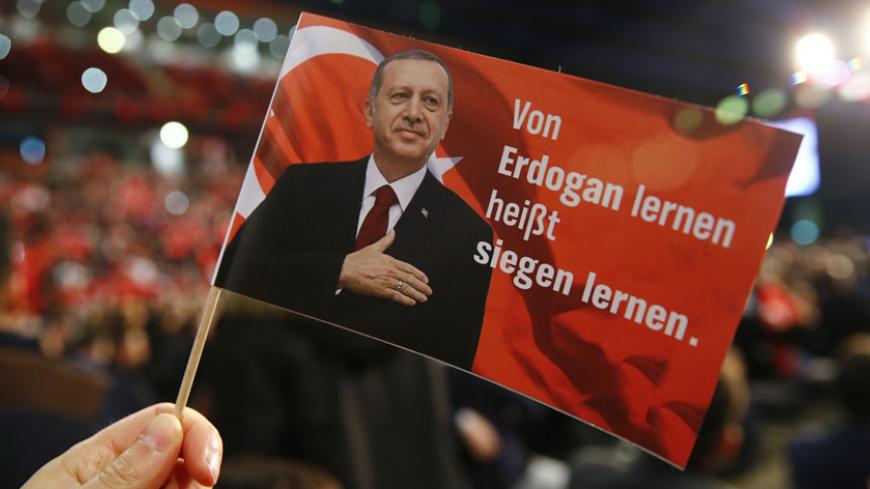 A man holds a flag showing Turkey's President Recep Tayyip Erdogan that reads "Learning from Erdogan means learning how to win" during the speech of Turkish Prime Minister Binali Yildirim in Oberhausen, Germany, on Feb. 18, 2017, to promote Turkey's April 16 referendum on an executive presidency. - REUTERS/Wolfgang Rattay

ANKARA, Turkey — As Turkey counts down to a critical April referendum on a presidential regime, the ruling Justice and Development Party (AKP) and President Recep Tayyip Erdogan see ever growing reasons for “national mobilization.”

After the Turkish lira’s dramatic slump against the dollar, for instance, Erdogan declared a “national mobilization” to curb the greenback, urging citizens to convert their dollar savings to Turkish liras or gold. Soon, the Turks were called to mobilize to prop up the shrinking domestic market. In a bid to encourage citizens to spend more, the government cut taxes on furniture, domestic appliances and home sales. Then came “the national housing mobilization” as 10 public and private banks provided a new credit line for homebuyers until March 31, offering 20-year repayment schemes on purchases from a number of major housing projects, led by a state-owned real estate investment company.

The latest call for “national mobilization” came Feb. 7, and the target this time was the soaring unemployment rate. Speaking at a gathering of the Turkish Union of Chambers and Commodity Exchanges (TOBB), a business group boasting 1.5 million members, Erdogan claimed Turkey was under an “economic terror” attack and urged a “hiring mobilization” to start curbing the unemployment rate in March.

Prime Minister Binali Yildirim, for his part, did some math and offered the following formula, saying, “If each TOBB member hires one new person, 1.5 million people will get jobs. If we increase the number to two, we will be speaking of 3 million [new jobs].”

The government had brought up the same formula before, but without any tangible results. In 2010, for instance, Erdogan, then prime minister, argued the unemployment problem could be easily resolved if each TOBB member hired one new person. He repeated this call in 2016.

Erdogan’s renewed pressure on the business community speaks of the serious strain the government feels ahead of the referendum amid a worsening economic downturn, which many see as closely linked to political missteps. Yet no speaker from the opposition was present at the TOBB gathering to offer a dissenting opinion or an alternative solution.

The business community put on an enthusiastic face, even though until lately it had been lamenting that economic woes and uncertainty have made layoffs inevitable. Leading tycoons and business associations pledged "full support" for the “hiring mobilization.” Furniture manufacturers promised to hire 50,000 new people, textile and ready-to-wear producers another 50,000 and the exporters’ community at least 300,000, in addition to tens of thousands of other hires, pledged by the heads of TOBB-affiliated trade and industry chambers.

On Feb. 15, the Turkish Statistical Institute released the latest unemployment figures. The unemployment rate rose 1.6 points in November to hit a seven-year high of 12.1%, meaning that the army of jobless grew by 590,000 people to reach 3.7 million. Things were even more alarming in the 15-24 age group, where the rate increased 3.5 points to 22.6%.

Given this state of affairs, one cannot help but notice that Ankara’s “mobilization” campaigns are largely timed according to the April 16 referendum. The tax cuts, for instance, will be valid through April and the housing campaign until March 31.

When it comes to the “hiring mobilization,” employers will enjoy incentives by the end of the year. Aiming for up to 1.5 million new hires, the government will take over the taxes and social security premiums of new employees. This means that for any new worker with a minimum wage — currently 1,400 Turkish liras ($386) — the employer will pay 733 Turkish liras less to the state. According to Finance Minister Naci Agbal, the incentives will cost an estimated 12.3 billion Turkish liras (some $3.5 billion) and will be met by the Unemployment Insurance Fund, whose money comes from monthly contributions from employee salaries and matching contributions by employers.

The government had resorted to similar measures in 2015, which saw two general elections under then-Prime Minister Ahmet Davutoglu. As part of so-called publicly beneficial programs, AKP-run local administrations and government agencies hired more than half a million workers for temporary jobs such as tree-planting, school cleaning and cemetery maintenance. Their wages, taxes and social security premiums were met from the Unemployment Insurance Fund as well. After the AKP triumphed in the Nov. 1 elections, restoring the parliamentary majority it had lost in the June 7 polls, the workers were gradually laid off.

Those layoffs and the massive purges that followed the coup attempt last year contributed to the increase of the unemployment rate, atop the impact of the contracting economy.

This time, the government is pledging to recruit 20,000 new teachers. Along with the Education Ministry, other public institutions, too, are likely to hire tens of thousands of new employees ahead of the referendum, most probably on a contractual basis to make layoffs easier in the future.

Without any real improvement in the economy, those to be hired by the private sector will also risk losing their jobs after the referendum or at the end of the year, when the incentives expire. Yet if the new hires reach 1 million, for instance, this would mean an additional spending potential of at least 1.4 billion Turkish liras (about $400 million) in the domestic market per month, based on the minimum wage. This would certainly have a stimulus on the economy.

In sum, the pre-referendum strategies of Erdogan and the AKP seem designed to secure some transient, artificial economic improvements aimed at boosting the “yes” vote in the plebiscite. As long as the constitutional changes are approved, the president and the government are not expected to worry much about the eventual layoffs of the newly employed, as the aftermath of the last election suggests.