Who’s who in the Trump NSC: The retired military intelligence officers who helped David Petraeus with the surge in Iraq are now shaping policies for a president who says the United States should have never invaded Iraq. 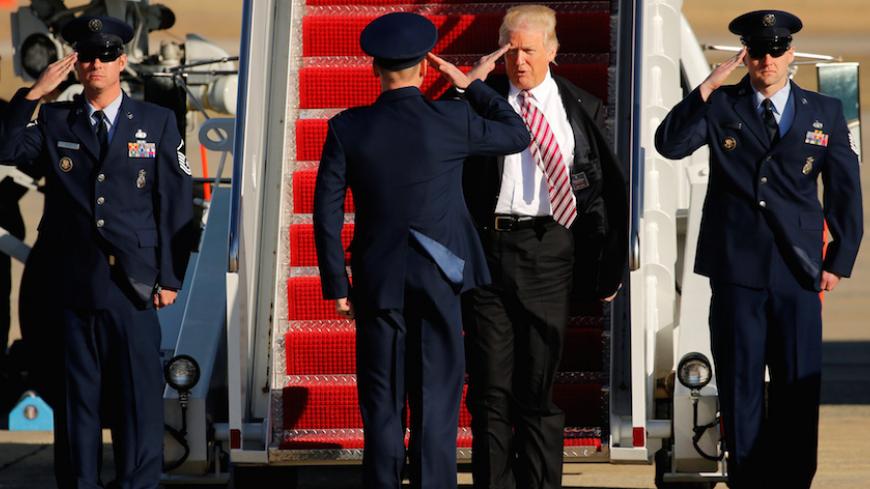 US President Donald Trump salutes as he arrives aboard Air Force One at Joint Base Andrews, Maryland, Jan. 26, 2017. - REUTERS/Jonathan Ernst

Unclear, as yet, is if they have a boss who will be receptive to their efforts and searing battlefield experiences. Those include helping devise the strategy to quell the post-US invasion Iraq insurgency, and later seeing those gains lost following the US withdrawal from Iraq in 2011 and subsequent rise of the Islamic State (IS). For all their experience, there is a tendency, as each new US administration comes in with its critique of its predecessor, to refight the last war, even as the situation on the ground has evolved.

While Trump's national security adviser, retired Army Lt. Gen. and former Defense Intelligence Agency director Michael Flynn, was visible during the 2016 US presidential campaign — including, controversially, leading chants of "Lock Her Up!" — the fellow former senior military intelligence officers who have taken top jobs advising him on Middle East policy at the NSC are widely respected in military circles, if less known or visible to the general public.

Retired US Army Col. Derek Harvey, who leads the NSC Middle East team as the special assistant to the president and White House coordinator for the Middle East and North Africa, is credited with figuring out the nature and composition of the Iraqi insurgency that erupted after the US invasion in 2003 and dissolution of the Iraqi army.

Col. Joel Rayburn, who serves as the NSC director on Iraq, Iran, Lebanon and Syria, is an army intelligence officer who has written the US military's official account of the Iraq war, as well as the publicly available 2015 book, "Iraq after America: Strongmen, Sectarians, Resistance."

Retired US Army Col. Dr. Michael Bell, who serves as the NSC director for Gulf Affairs, served as an officer in Europe and the Middle East and as a strategist to the Joint Staff. He came to the NSC after most recently serving as chancellor of the College of International Security Affairs at National Defense University. (Yael Lempert, a career US foreign service officer who served as the Obama NSC senior director for the Levant, Israel and Egypt, is currently holding over as the NSC senior director for Israel, Egypt, Jordan and Palestinian issues, sources said. White House and NSC press officers did not respond to queries from Al-Monitor on the appointments.)

Harvey and Rayburn were handpicked by David Petraeus, the former US commander in Iraq and Afghanistan and later CIA director, to devise the surge strategy for overcoming the Iraq insurgency and stabilizing Iraq, said former CIA and NSC official Ken Pollack. Pollack, now with the Brookings Institution, told Al-Monitor, "These guys are all Petraeus' proteges."

"These are pretty unusual military officers," he said. "Derek [Harvey] and Joel [Rayburn] have a tremendous knowledge of the Middle East. Petraeus picked them to go back to Iraq to do the surge, Ph.D.-level warfare," Pollack added. “He needed really smart guys, who think beyond the normal, military way of thinking.”

"They were all instrumental in the surge," Pollack said. "[They realized] it was about the political and economic dynamics, and the military protecting good people, as much as killing bad people — in fact, de-emphasizing killing bad people, and recognizing that military force is only ever one part of the equation."

According to another expert, Harvey "was the military intelligence officer on the ground who shrewdly figured out the nature of the Iraqi insurgency when everyone was grappling with it in the early days of the Iraq war," said Hassan Hassan, who interviewed Harvey for his book, co-authored with Michael Weiss, "ISIS: Inside the Army of Terror."

Harvey, then working for Combined Joint Task Force 7, the US headquarters in Iraq, "found that the Sunni insurgency was a combination of Saddam loyalists, Iraqi Sunnis who were disaffected by the post-war de-Baathification policies and the disbanding of the Iraqi military that rendered thousands jobless overnight,” Hassan told Al-Monitor by email, drawing from his book. "With those, there were former Baathists who were radicalized during the 1990s as a result of the Faith Campaign that Saddam Hussain inaugurated in the wake of the First Gulf War."

"The conclusion was that it was the Sunni Arab identity, and the search for lost power and prestige, that motivated the Sunni insurgency," Hassan said of Harvey's early insights into the motivations for the Iraqi revolt.

Harvey joined the DIA as a civilian analyst in 2006 after serving 26 years as an army intelligence officer specializing in the Middle East. After working with him in Iraq, Petraeus, then-US commander in Afghanistan, later enlisted Harvey "to create his own intelligence agency inside [US Central Command]," Bob Woodward reported in "Obama's Wars." Based out of Centcom headquarters in Tampa, Florida, and working 15-hour days, Harvey concluded "the [Afghanistan] war could be won, but the US government would have to make monumental long-term commitments for years that might be unpalatable with voters," Woodward wrote.

Watching US gains made against the insurgency in Iraq lost after Obama withdrew US forces in 2011 was a deeply frustrating experience for many of the Petraeus proteges and others in the Centcom alumni community, around Tampa, where Harvey was based as a consultant and professor at the University of South Florida in recent years after retiring from the DIA, according to a think tank expert who briefed Harvey on his research.

"I think in order to understand Derek [Harvey], you have to understand his milieu post-government in Tampa, interacting with [Special Operations Command]/Centcom folks," the think tank expert, speaking on condition of anonymity, told Al-Monitor. "Tampa has a very particular perspective on how it all played out."

"They think we lost Iraq," the expert said. "That Obama weakened our position."

When the expert briefed him in the 2014 time frame, Harvey's questions were about "Iran, Iran, Iran," the think tank expert said. "He was very focused on, how do you push back on their [Iran's] malign activities."

Harvey was also "a big advocate for Flynn" when Flynn was at the DIA, the think tank expert said. Flynn, who served as DIA chief from 2012 to 2014, was reportedly forced out a year early for clashing with civilian intelligence chiefs, including the director of national intelligence. Flynn, 59, has spoken of frustration with what he described as the Obama administration's inattention to what he saw as the growing instability in Iraq and the rise of IS, and alleged that intelligence reports reaching the White House during his tenure as DIA chief were, in his view, downplaying the growing threat.

"I read the Presidential Daily Briefs and the minutes of the National Security Council's deputies meetings, and it was very, very clear to me that reporting on the terrorism threat that came up the intelligence community's chain of command was very different from what was being presented at the top levels of government," Flynn told journalist James Kittfield, in a story published by Politico on Oct. 16, "How Mike Flynn became America’s angriest general." Flynn said, "That intelligence made it very clear that Al-Qaeda and its affiliates were not on the run, but were in fact rapidly expanding. The number of terrorist attacks were on the rise, and Iraq was starting to burn again. So that was Obama's big lie — that the enemy was on the run, and we were beating these guys."

According to associates, Harvey was sympathetic to Flynn's concerns.

Harvey "was considered to be brilliant, a bit pugnacious … he kind of has a personality profile similar to General Flynn's,” the expert said. "Very sharp. When they are convinced that they know the truth of something, they go at it very hard. … That sometimes created problems and burnt bridges he had at DIA."

"All of these guys come out of that military experience, in Iraq and Afghanistan, where the Iranians were not on our side," Pollack said. "The Iranians were actively supporting the people who were killing us. And so, what they have seen, is Iran waging warfare against us with relative impunity."

Harvey and Rayburn were frustrated by Obama's walking away from Iraq, and thinking that if you "walk away, it will get better," Pollack said.

"They all worked in Iraq," a former diplomat from the region, speaking not for attribution, said, referring to Harvey and Rayburn and their team. "They lost many soldiers and colleagues in Iraq due to Iranian IEDs."

"They know the complexity," the former regional diplomat continued. "They differentiate between Islamism and the tribal system and just normal people. They worked in Iraq many years. They have good, wise [views]."

Recently, “they are thinking how to put more pressure on Assad,” he added. "How to do safe zones, no-fly zones, [what are the] options, geographically, where they could be. … They don't trust Russia."

If the Obama NSC was more intellectual, even professorial, Flynn's team has "a better, more operational understanding on the ground," the former diplomat said. Ideally, there would be "someone in between" the intellectual and operational, he added.

Given the Iranian-backed IEDs and militia attacks that targeted US troops in Iraq, and reported Iranian pressure on then-Iraqi Prime Minister Nouri al-Maliki that scuttled options for a US follow on force in Iraq in 2011, it is notable that there have not been significant Iranian-backed attacks on US forces that have returned to Iraq since 2014 to help Iraqi and Kurdish forces combat IS.

As Flynn went to the White House podium last week to warn "that we are officially putting Iran on notice," following a Jan. 29 Iranian ballistic missile test, senior administration officials said Iran has a choice to make about its "behavior in the region" that is destabilizing.

But as each new US administration comes in with its critique of its predecessor — Obama with Bush’s decision to invade Iraq in 2003, Trump with Obama’s leaving a vacuum in Iraq that was filled by IS and also of Bush’s decision to invade Iraq — is there a risk that Petraeus’ proteges are fighting the war they left a few years ago, even as the situation on the ground has evolved, and US and Iranian forces in Iraq seem to be observing something like a cold truce?

These are "not guys who stopped paying attention to the Middle East when Obama came into office," Pollack said. "They are well aware that Iran-backed militias are not attacking the US [in Iraq]. That is not lost on midlevel officers."

The issue, Pollack said, is how much influence they will have.

"These are really smart, able guys … [who will ensure] their boss gets the full range of views," Pollack said. "But they do not give the orders."