Expectations were modest for a new round of Syria talks set to get underway in Geneva Feb. 23, with the new US administration still formulating its policies. 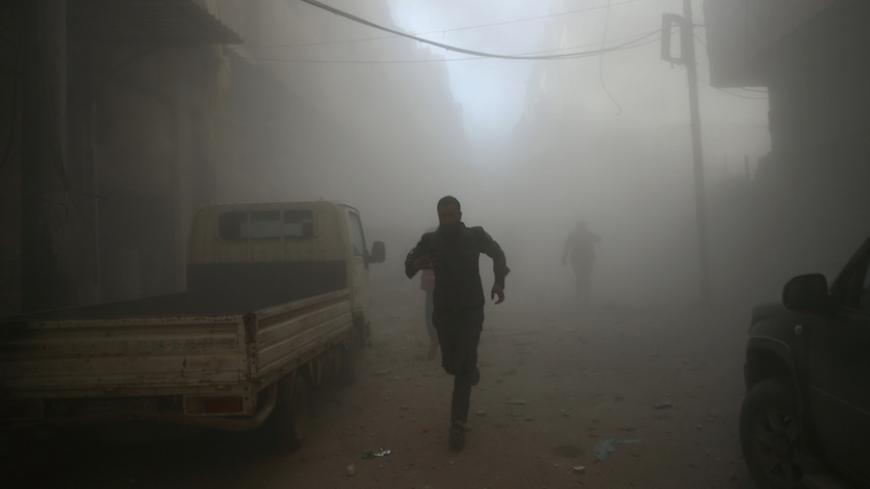 Men run at a site hit by airstrikes in the rebel-held, besieged Douma neighborhood of Damascus, Feb. 19, 2017. - REUTERS/Bassam Khabieh

WASHINGTON — United Nations Syria envoy Staffan de Mistura said that he was not expecting a breakthrough at a new round of Syria talks set to get underway in Geneva on Feb. 23. Instead, he aimed to gain momentum on talks toward a political settlement while a fragile cease-fire brokered by Russia and Turkey late last year has mostly held.

"There is a rush between us and the spoilers,” he said. “We have to outpace those [spoilers] … with momentum on the political track, and I think we can aim at that.”

Beyond spoilers on the battlefield, he said, the fact that the new US administration, just over a month in office, is still formulating its policies, may be another unintended drag on political talks gaining momentum now.

“Any new administration requires some time before devising a new strategy,” de Mistura said. “They have announced that they want to revisit their policy regarding the fight against Daesh/ISIS [Islamic State] and by implication what they are doing in Iraq and Syria. So when the press asked me … whether I knew what was the American position, the answer I gave was … we are not yet in a position of speaking on their behalf. … I do know they are [getting] instructions from President [Donald] Trump to develop a new strategy or new options. … So I would say let’s wait for that.”

He added, “I am convinced that they will be very supportive to whatever we try to do. I can’t tell you more than that. … I am not criticizing. I am not complaining. On the contrary, I am just understanding, frankly, that you need a month for devising a new strategy, and we are waiting for that. … And we look forward to see what the strategy is. In the meantime, history goes on and we need to begin those talks; otherwise, we lose the momentum.”

US Syria envoy Michael Ratney, a career diplomat who has held the envoy post since 2015, will be attending the Geneva talks along with other representatives of the International Syria Support Group. Ratney, who was named deputy assistant secretary of state for Syria, Jordan and Lebanon this month, will be “dual-hatted,” serving as both deputy secretary of state and special envoy for Syria, a US official said.

“Special envoy Michael Ratney will be in Geneva where he will remain in close contact with the United Nations and with the Syrian opposition delegation to the UN-led talks,” the US official, speaking not for attribution, told Al-Monitor.

The format for this round of intra-Syrian talks — dubbed “Geneva 4” for the fourth major set of negotiations to try to find a political solution to end the nearly 6-year-old Syrian civil war — has not yet been agreed upon, de Mistura said. He would be discussing that with the parties in bilateral talks beginning the morning of Feb. 23.

Some three rounds of talks in Astana, Kazakhstan, this year, including Russia, Turkey, Iran and recently Jordan, as well as Syrian government and armed opposition groups, have focused on how to strengthen the cease-fire and on confidence-building measures toward a cease-fire. But the Astana track talks do not have a mandate to negotiate a political settlement, the UN envoy said.

“Astana has been and is a very positive initiative,” de Mistura said. “Their mission is a very important one. It is about the cease-fire. Ask the Syrians. … They will tell [you], this is the priority. A cease-fire, then, of course, you can have the talks ... any negotiation can take two, three months, two years. … But with no bombing, no shelling … totally different.”

He continued, “So Astana: cease-fire, confidence-building measures related to it … full stop. Geneva is what we are trying to do here. The political process.”

With the new US administration still formulating its plans and Secretary of Defense Jim Mattis expected to deliver his recommendations on combating the Islamic State to Trump next week — until then, “everything is frozen,” a Syrian opposition official said.

“On the ground, every party tries to grab more pieces of … land … just to empower their political negotiating position,” said the Syrian opposition official, speaking not for attribution. “The Americans are [still] thinking what they will do. So I don’t think anything serious will happen” in Geneva, the opposition official added.

Though Turkey has recently seemed to replace the United States as the major broker with Russia in the recent Syria cease-fire, the United States will be required to be a major presence in the room to advance a political solution, he said.

“Russia’s interests are different from Turkey’s and different from Iran’s,” the Syrian opposition official said. “So they may agree on some kind of cease-fire. But they will never agree on [a] political game.”

A freezing of the conflict while longer-term political talks take place may be what is achievable now, Middle East expert Paul Salem said.

“This civil war is not going to end anytime soon,” Salem, with the Middle East Institute, said Feb. 21. “It is possible we could get to a freezing of the conflict until such time it could be resolved.”

The Syrian opposition’s apparent rejection of a draft Russian constitution for Syria, deemed by them to legitimate Iran’s role in Syria, seemed to be reflected in de Mistura’s comments Feb. 22.

“The drafting of a constitution is the sole prerogative of the Syrian people, not us, not anybody else,” de Mistura said. “The UN is there to help them … and it is our hope that it will be possible to agree on a process to help devise a new constitution. Such a process should be as inclusive as possible.”

This round of Geneva talks is expected to last 10 days to two weeks, the Syrian opposition official said.