Who is involved in killing of Baghdad demonstrators?

The political crisis has escalated significantly in Iraq after security forces grew violent against protesters. 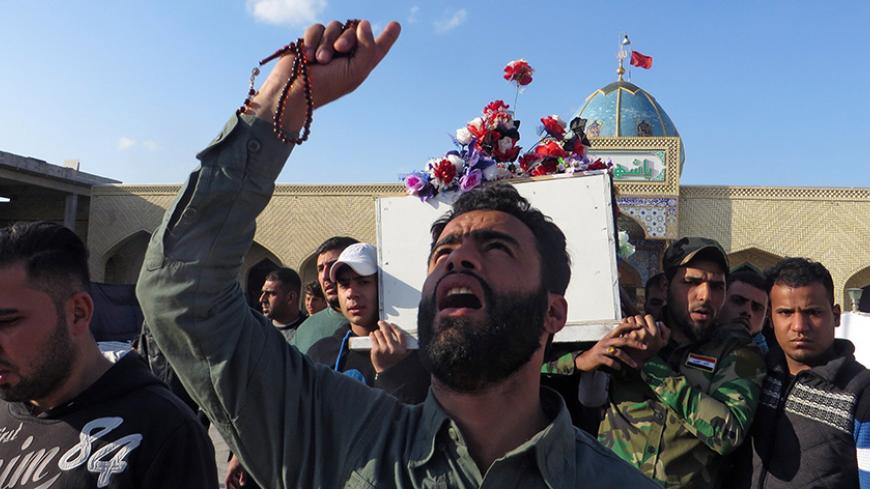 Mourners carry the coffin of a protester who was killed in demonstrations in Baghdad during his funeral in Najaf, Iraq, Feb. 14, 2017. - REUTERS / Alaa Al-Marjani

The use of violence against those who took part in the demonstrations that started Feb. 11 upon the request of Shiite cleric Muqtada al-Sadr to demand that the electoral commission accused of corruption be overhauled might lead Iraq to a crossroads and a political crisis with dire consequences.

Sadrists believe the government instructed riot police to use violence against the demonstrators, leading to the killing of five protesters and two security officials and the wounding of more than 320 people.

While Sadr's followers fired mortar shells at the Green Zone, Sadr condemned the violence perpetrated against the demonstrators as well as the launch of missiles. Sadr warned that if the violence continues against the protesters, Iraq will suffer.

The escalation of differences and mutual accusations between the Sadrists and the Iraqi government and the widening gap between the two sides led Parliament Speaker Salim al-Jabouri to call Feb. 13 for the formation of an investigative parliamentary committee to look into the targeting of protesters. Jabouri stressed the need to protect “demonstrators and refrain from using violence while dealing with peaceful demonstrations.”

Those opposing the reform protests accused the Sadrist leadership of mobilizing the Iraqi street against state institutions through reform slogans. Meanwhile, the Sadrists accused the security members who attacked the demonstrators of being loyal to “political parties that are hostile to both the Sadrists and the Iraqi people.” They also accused leader of the State of Law Coalition Nouri al-Maliki of pushing certain security apparatuses to suppress the demonstrations.

Faiq al-Sheikh, a parliament member for the Civil Democratic Alliance, accused Maliki and several Dawa Party leaders of taking advantage of the Election Commission and hindering its overhaul process because the Dawa Party is widely represented in the current commission.

Nahla al-Hababi, a member of parliament for the State of Law Coalition, told Al-Monitor she was strongly against these accusations. “What happened is a violation on the part of some agitators in the security forces who were trying to protect themselves in any way possible,” she said. “Maliki has nothing to do with the demonstrations, as some people are saying. The demonstrations were chaotic and almost spun out of control, and the security services maintained security and order, which is their main duty.”

Asked about the legitimacy of Sadr’s call on July 2, 2016, to change the Election Commission by mobilizing the street, political analyst Abdul Qadir al-Arsan said, “This conflict has nothing to do with any reform process because Sadrists are essential partners in the political process, and they have representatives in the Election Commission, so how can they call for institutional reform in an institution they are represented in?”

On Feb. 14, the complexities plaguing the security and political landscape in Iraq as well as the easily penetrable demonstrations led Prime Minister Haider al-Abadi to acknowledge the existence of troublemakers who pushed some demonstrators to cause friction with the security forces.

During his weekly press conference, Abadi asked which side benefits when the youth are engaged in political quarrels. He called for “respecting the right to peacefully demonstrate and identifying those who were behind the mischief that affected innocent citizens.”

Iraq's current political and security situation is reminiscent of 2006, when political differences and regional interventions produced a sectarian conflict in the country.

Member of parliament for the Liberal bloc Abdul Aziz Dalimy told Al-Monitor, “The continuation of the reform protests threatens some powerful political forces and prevents them from achieving political ends.” He described what happened to the demonstrators as “a crime of unspeakable cruelty and a violation of the constitution, which guarantees the right to demonstrate and the freedom of expression.”

Shorouk al-Abeiji, a parliament member for the Civil Democratic Alliance, expressed to Al-Monitor over the phone her concern over the government’s failure to take a firm position on the suppression of protesters. She said, “There are armed groups affiliated with known political parties or registered with the Popular Mobilization Units that may be accused of repressing demonstrators.”

One PMU leader, however, immediately denied these accusations. Rayan al-Kaldani told Al-Monitor that the PMU are a security force that does not get involved in political differences. Kaldani denied “the existence of PMU factions inside the capital Baghdad," saying, "All of the PMU factions are fighting in the battlefields and defending important areas in the Baghdad belts.”

The political dispute between the Sadrists and the government could play a significant role in shaping new alliances prior to the parliamentary elections scheduled to be held in September this year.

Amir al-Kanani , an adviser to the president for legal affairs, acknowledged that “differences could play a major role in shaping new political relationships among the current allies within the Shiite groups,” and wondered "what led the government to use excessive force against demonstrators.”

Kanani, a former parliamentarian for the Liberal bloc, called on the government and the House of Representatives to “conduct an honest and transparent investigation to identify those who gave the orders to kill protesters and submit the findings of this investigation to the presidency of the republic and human rights organizations."

Legal adviser to President Fuad Massum criticized what he called “the phenomenon of multiple decision-making sources in the security services and their lack of a true identity.” He called on the prime minister to “hand over the security dossier in the capital to the Interior Ministry alone and to hold accountable those who violated the law and fired live bullets to avoid the recurrence of such cases.”

If the political partners fail to reach an agreement on how to manage the state affairs and build state institutions, another round of violence and verbal and media escalation is bound to take place in the next stage, especially considering that all the partners possess armed units that can collide with each other at any time.