Confronted with a yet-unknown position by US President Donald Trump and continuous pressure from his coalition partners, Israeli Prime Minister Benjamin Netanyahu keeps changing his mind about the settlement Regularization law. 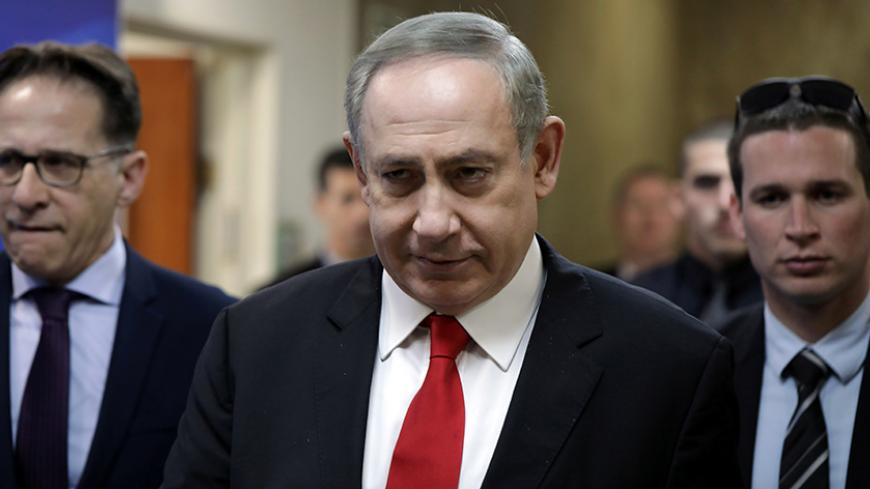 In less than seven days, Israeli Prime Minister Benjamin Netanyahu managed to change his mind regarding the Regularization law at least five times. And if we take a wider perspective of Netanyahu’s stance toward the bill that is supposed to regularize all the illegal housing units in West Bank settlements, the prime minister has zigzagged and flip-flopped many more times than that.

Ministers Naftali Bennett and Ayelet Shaked (HaBayit HaYehudi) initiated the bill in an effort to compensate the residents of the Amona outpost who were evacuated Feb. 2, the residents of nine illegal houses in the Ofra settlement and the other tens of thousands who live in housing units on controversial land. Netanyahu is trying to keep up with his coalition rivals from HaBayit HaYehudi, mainly due to lack of choice: He needs to safeguard his chances for siphoning off some of their voters in the next elections. The new US administration was drawn into this chaos — an administration that is still a puzzle to the higher-ups in Jerusalem.

Officials in the Israeli defense system recommend not to try to establish facts on the ground — namely construct new West Bank settlements — before full coordination is attained with the new administration in Washington. Netanyahu’s emissaries who have met with the Trump administration’s top brass several times are still unable to put their finger on the new president’s policies. It is altogether likely that the president himself has not finished consolidating his policies with regard to the peace process between Israel and the Palestinians. Netanyahu is trying to maneuver between all these opposing forces and hold the stick at both ends, while investing great efforts in trying to understand the new rules that President Donald Trump will lay out for him.

The bill was supposed to have passed its second and third readings in the Knesset and become Israeli law last week — simultaneously with the evacuation of the illegal outpost of Amona. On the evening of Jan. 28, Netanyahu announced that the law would be passed “on Monday” (Jan. 30). Then, on Jan. 30 he promised it “will pass this week,” but the week went by and on the morning of Feb. 5 he was still throwing out hints that he intended to make the push and pass the bill into law Feb. 6. But then he reconsidered and said that it was preferable to wait for coordination with the Trump administration. He said that he wanted to talk with Israeli Ambassador to the United States Ron Dermer, so that the latter could coordinate the process with the administration.

Opposite him were the members of HaBayit HaYehudi who did not blink when hearing Netanyahu’s words Feb. 5. Associates of Bennett and Shaked said that the coalition would be in danger if the law was not passed this week. And Netanyahu, who from an airplane ramp just prior to taking off for a quick visit to London, said, “I hear fake ultimata all the time. It doesn't move me.”

When the bill first came under discussion in a meeting of the security Cabinet in November 2016, Netanyahu had said, “If this bill passes, we might be taken to The Hague [ICC].” But since Bennett insisted, Netanyahu was forced to vote in favor of the bill in its first reading. The prime minister continues to be torn between two competing interests: The first is Israel’s overarching interest, involving coordination with the United States and avoiding actions that could cause Israel to lose international legitimacy and set it up for a lawsuit in the International Criminal Court in The Hague. The second interest is Netanyahu’s personal, political welfare and narrow coalition interests.

Ever since the last elections in 2015 when Netanyahu siphoned off a considerable number of HaBayit HaYehudi voters (mainly settlers), he has been brutally quarreling with Bennett over every future vote from the religious Zionist sector. Bennett had hoped to differentiate himself from Netanyahu via the Regularization law, but then Netanyahu adopted the “keep up with Bennett” strategy at any price. This week, when everyone’s eyes are on Washington, Netanyahu’s policy has run aground.

The euphoria that filled Jerusalem after Trump’s election was replaced by tense anticipation. The White House announcement last week, which criticized the Israeli statement about building thousands of housing units in the territories, set off warning bells in the prime minister’s office — even though the criticism was toned down. True, the Americans noted in the announcement that “we don’t believe the existence of settlements is an impediment to peace” — a phrase that constitutes a dramatic policy change compared to all the preceding US administrations. But the announcement ended by saying that new construction in the territories may harm chances for peace. This was a surprise that no one in Jerusalem had anticipated.

Israeli Mossad head Yossi Cohen has already met twice with Trump's national security adviser, retired Lt. Gen. Michael Flynn. Dermer enjoys a close relationship with the president’s son-in-law Jared Kushner, who is reputed to have great influence over the president, mainly on issues that are important to Israel. Nevertheless, no one in Jerusalem would be willing to place bets on the results of the first meeting between Trump and Netanyahu that is scheduled to take place Feb. 15. Not surprisingly, Trump is emerging as an unpredictable, volatile president with a short fuse and lacking any inhibitions at all. Netanyahu will need to be at his best to “recruit” Trump to the Israeli side; for Netanyahu, this means leaving the diplomatic process in its present state of deep clinical coma.

As of today, the signs reaching Jerusalem from Washington are mixed and not always encouraging. First, the Americans insist on holding the meeting at a very inconvenient date for the prime minister. Second, Netanyahu finds himself the fourth foreign leader to meet with the new president after the latter’s inauguration, and not the first as he had hoped. He even comes after Jordanian King Abdullah II. Then there was the strange announcement disseminated by the White House in commemoration of International Holocaust Remembrance Day on Jan. 27, which did not mention the Jews at all. All in all, what we see is a strange mixture of good and bad signs from the new president that arouse much confusion in Netanyahu’s environs.

Former US Ambassador Dan Shapiro sent a series of 22 tweets last week, in which he brilliantly and exhaustively analyzed the chances and risks of the first Trump-Netanyahu encounter. According to Shapiro, there is a good chance that the Trump-Netanyahu relationship will be a good one, as is expected. However, there is no doubt that Trump will have demands from Netanyahu as well. According to Shapiro, Trump may even ask Israel to accept and agree to US-Russian cooperation in Syria. This would be a bitter pill that the Israeli defense system would have a hard time swallowing. In any event, Shapiro asserted, Netanyahu may very well find out that the current US administration requests its own hefty demands of Israel regarding the Palestinian issue. The prime minister may come to realize that the virtuosic diplomatic skills that he will need in relating to Trump will be no less than those he honed over eight long, hard years working with US President Barack Obama.