Human rights organizations claim that Israel’s border police prevent the entry of activists who are critical of the government's occupation policy. 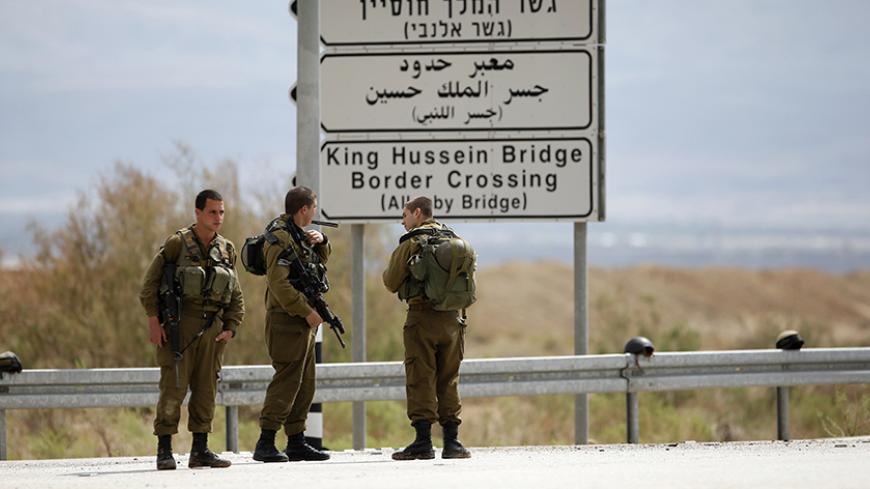 Israeli soldiers stand guard near the entrance to Allenby Bridge, a crossing point between Jordan and the occupied West Bank, near the West Bank town of Jericho, March 10, 2014. - REUTERS/Ronen Zvulun

But what started out as a measure against anti-Israel boycott supporters has in the past few weeks been expanded to include human rights activists. On Feb. 8, Israeli border police detained Jennifer Gorovitz, the vice president for operations and administration of the New Israel Fund.

In a Feb. 16 piece in Haaretz, Gorovitz shared her feelings about her experience at Ben Gurion Airport. "My privilege as a Jew means I never imagined that Israel could or would deny me entrance,” she wrote. “And so I was not prepared for a passport control officer to sneer at my explanation that the New Israel Fund (and Shatil) support civil society: ‘You mean Palestinian civil society.’ … After multiple interrogations focusing on NIF’s work, it became clear that I had been detained for political reasons — no other explanation fit."

Gorovitz was eventually released only after the intervention of the NIF president, attorney Talia Sasson.

On Feb. 24, Israel’s Ministry of Interior refused to issue a work visa for Omar Shakir, a researcher for Human Rights Watch, claiming that the organization was a Palestinian propaganda tool fronting as a human rights group. The Foreign Ministry’s position on the issue — as expressed in a statement by spokesman Emmanuel Nahshon — was that “we are no longer willing to turn the other cheek.” Only when the Donald Trump administration demanded to know why Israel was denying entry to an American citizen working for an American organization, and after the intervention of Prime Minister Benjamin Netanyahu, did the Foreign Ministry make a U-turn, announcing that the application would be re-examined.

In a joint statement protesting the conduct of the Interior Ministry, 16 human rights groups accused Israeli immigration authorities of acting like a “thought police.” The activists claimed that preventing entrance into the country would not prevent the reporting on human rights violations, and that “attempts to silence the messenger will not suppress our message.”

“There’s a sense of a tightening noose,” Sasson told Al-Monitor. “This is manifested in attempts to prevent the public from being exposed to opinions other than those of the government, both by direct de-legitimization and through indirect legislation and various regulations.”

Sasson said that when she called the airport and asked the policeman in charge why Gorovitz was being questioned, he answered that it was for security reasons. “What security reason could there be? I advised prime ministers about security-related legal issues and there can be no security issue involving a 50-something lawyer from the United States who has been active her entire life in raising funds for Israel,” said Sasson, who served in senior positions in the State Attorney’s office for 25 years.

Sasson added that during her questioning, Gorovitz, herself also a lawyer, saw the police holding a document on which the letters “BDS” were written, but the police denied that this had anything to do with her questioning. “I think the BDS issue is being used to try and keep out of Israel people whose views differ from those of the government,” Sasson said.

B’Tselem spokesman Amit Gilutz told Al-Monitor that the various human rights organizations are under constant attack, “but nonetheless there are other swaths of the public that mobilize to support us and protest the limitations placed on us.” Surprising data published by his human rights group indicates that after the October 2016 speech delivered by B’Tselem Executive Director Hagai Elad at the United Nations, following which coalition chairman David Bitan demanded that Elad’s citizenship be revoked, donations to the organization by Israeli citizens living in Israel skyrocketed 855%. Still, activists of B’Tselem and other organizations are deeply fearful of the continued attacks on them under the guise of security.

According to Sasson, “Security has become a catchword used to camouflage the political goal behind the attack on the organizations. You can parse the security explanations any way you like so they can be used to silence us, and we’re not allowed to object.”

Sasson noted that the organizations’ options for legal measures are limited, “and that’s why the issue has to be exposed as much as possible. The media is vital to this struggle and exposure abroad is critical. The fact is that in the case of Omar Shakir, when the US administration heard that a researcher for an organization registered in the United States was being barred from entering Israel, they were angered and demanded explanations. We, Israelis who fear for our democracy, for freedom of expression and political freedom, have to get Trump’s protection? How ridiculous is that?”

As if this was not enough, Knesset member Shuli Mualem of HaBayit HaYehudi recently tabled legislation designed to make it harder for human rights organizations to compile information from government ministries and public authorities. According to her proposed bill, not only will their usual exemption from these fees be revoked, they will be obliged to pay a double fee. “The Israeli taxpayer doesn’t have to bear the cost of generating information for hostile elements funded by the European Union and other foreign states,” she explained.