Frantic to extract himself from his immigration failure, Prime Minister Benjamin Netanyahu is accusing a US-based nongovernmental organization called the New Israel Fund of sabotaging an agreement with Rwanda. 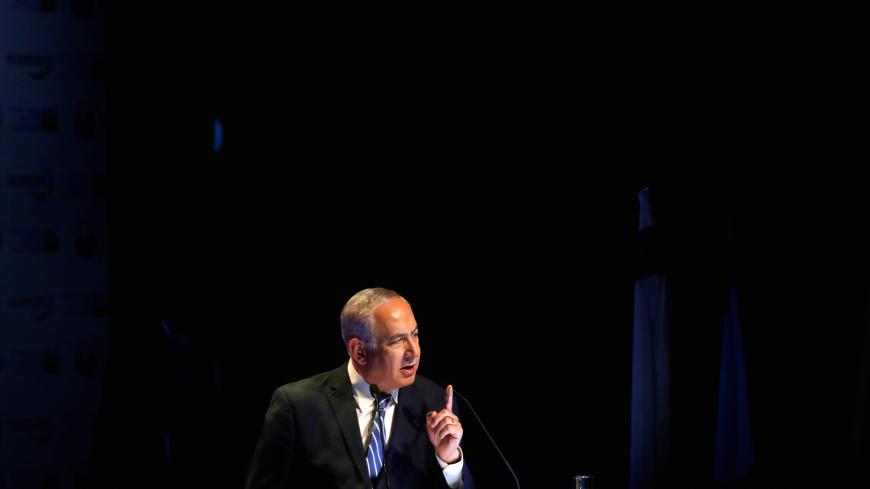 Prime Minister Benjamin Netanyahu has a system. Anytime he feels pressure from voters on the right, he pulls out a homegrown enemy to justify his actions and unite his supporters around him. Take for example election day in 2015, when he warned about the Arab voters allegedly being bused to polling stations by the political left. The gambit was successful: Netanyahu managed to spread fear among his voters, who rushed to the polls and kept him in power.

For Netanyahu, the most dangerous domestic enemy is the political left, and he makes abusive and frequent use of this scapegoat. In 1997, during his first term as prime minister, he was overheard whispering in the ear of the elderly kabbalist Rabbi Yitzhak Kaduri, one of the spiritual leaders of the ultra-Orthodox Shas party, that leftists "have forgotten what it is to be Jewish.” During his subsequent terms, nonprofits dedicated to human rights have been turned into enemies of the people, among them B’Tselem, which documents the conduct of Israelis in the West Bank, and Breaking the Silence, which reports human rights violations by Israeli soldiers against Palestinians.

The New Israel Fund is also included in Netanyahu's enemy camp. He stirs up resentment among his supporters, who swallow his incitement hook, line and sinker, even though many Israelis have no idea what the organization does.

On the morning of April 3, Netanyahu announced in a news conference that Israel had reached an agreement with the UN concerning illegal African immigrants. A few hours later, Netanyahu executed a panicked U-turn, revoking it after coming under harsh attack by his constituents. He then declared that the NIF had scuttled an earlier arrangement his government had reached with Rwanda to take in immigrants deported by Israel. Netanyahu claimed that the cancelation of the Rwanda arrangements pushed him to sign the agreement with the UN, which he then decided to revoke. Rwanda denied any contact with or pressure from the NIF.

"The fund's supreme goal is to eliminate the Jewish character of Israel and turn it into a state of all its citizens, alongside a Palestinian nation-state free of Jews in the 1967 lines, with Jerusalem as its capital,” Netanyahu wrote on Facebook. He then called for a parliamentary commission of inquiry to examine the fund’s activities. The NIF flatly denied Netanyahu’s claims. “Netanyahu has crossed every red line in inciting against us,” the NIF responded. “The fund did not have any contacts with the government of Rwanda. All the information about the New Israel Fund's activity and organizations is accessible, transparent and reported. This is a battle for Israeli democracy. Israel is us."

Many Israelis were caught up in Netanyahu’s invective against the organization without knowing that it is mostly devoted to promoting social issues and helping the disadvantaged. The NIF’s Israel director, Mickey Gitzin, conceded in an interview with Al-Monitor that the organization has failed to explain its mission convincingly and said that since assuming office eight months ago he has been active in informing the public about the NIF’s contribution to Israeli society.

“The prevailing view has always been that the NIF’s activity is not the story,” he said. “The real deal are the nonprofits we fund that carry out their invaluable work. To this day, people in the fund have a hard time making the vital switch and telling the world about our work in response to all the inciters, especially to Prime Minister Netanyahu, who has turned them into enemies.”

The New Israel Fund is a registered US nonprofit established almost 40 years ago and funded by donations, mostly from American Jews. “We don’t have billionaires donating millions of dollars. We get relatively small donations that help us support most of our civil initiatives in Israel,” Gitzin explained. “We are always ahead of the pack. This is especially true on campaigns for social and economic justice that the NIF sponsors.”

Through direct funding of hundreds of organizations, NIF and its operational arm Shatil are “present everywhere to help the weak," he said. "We focus on five areas: freedom of religion and religious pluralism, social and economic justice, shared Jewish-Arab society in Israel, human rights and democracy.”

Its causes are many and varied, from support for Jewish women whose husbands refuse to grant them a divorce in accordance with Jewish law to redressing labor law violations against contract workers “even before the national trade union federation came up with the idea,” he said. For example, Shatil was instrumental in the 2017 opening of a radiation therapy institute in the Galilee town of Safed, the first such medical facility in Israel’s geographic periphery, he noted, adding, “The absurd thing is that Prime Minister Netanyahu and [Deputy] Minister of Health Yaakov Litzman came to cut the ribbon of the facility established with the help of the NIF.”

Gitzin was animated as he described the abundance of social issues and activities that the NIF sponsors. Every disadvantaged group in Israeli society is deserving of the fund’s support, he says: Israelis eligible for public housing, Ethiopian immigrants and their Falash Mura (Ethiopian Jews who converted to Christianity in the last century) family members left behind in Ethiopia, the LGBT community, Israeli Arabs and more.

Asked whether the NIF has any links with Rwanda, Gitzin answered, “Until not so long ago, I didn’t even know where it is.” Rwanda’s Deputy Foreign Minister Olivier Nduhungirehe also said he had never heard of the NIF and dismissed suggestions that a foreign organization could exert pressure on the government of his country.

Gitzin said his organization is considering bringing a libel suit against the prime minister, saying, “There’s a problem because a prime minister enjoys immunity, but we are seriously considering it nonetheless.” Knesset members indeed cannot be sued for libel. Meanwhile, he said with satisfaction, Netanyahu’s incitement against the fund has prompted an outpouring of donations by its supporters.