The Palestinian leadership has failed thus far to establish direct channels of communication with the White House, but Jordan’s King Abdullah II may have succeeded in transmitting at least one of its messages to President Donald Trump. 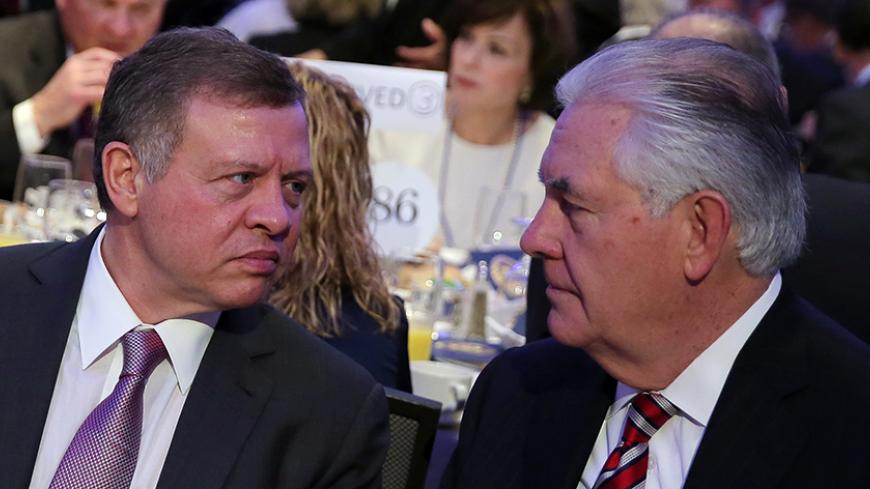 The statement by White House Press Secretary Sean Spicer put an end to the euphoria of Israel’s right-wing sector. Formerly, the right had thought that Donald Trump’s entry to the White House would release all the brakes and barriers regarding the settlements and give Netanyahu’s government a blank check to build and enlarge an unlimited number of settlements to his heart’s desire.

Spicer released his statement Feb. 2 — not as part of the White House daily briefing or as an answer to a question posed by journalists, but at the White House’s own initiative. The statement is well-written and formulated, and implies that the “settlement party” is over. “The construction of new settlements or the expansion of existing settlements beyond their current borders may not be helpful in achieving that goal [of peace],” announced Spicer in the name of the US president.

Israel was caught completely by surprise. After all, only on Jan. 24, Prime Minister Benjamin Netanyahu and Defense Minister Avigdor Liberman jointly announced the construction of 2,500 housing units in the West Bank, and, for the first time in about eight years, the United States did not censure the move. The implication was that the Trump administration supports Israel’s settlement enterprise. In light of the success of the test balloon that Netanyahu and Liberman released, they announced the approval of plans for the construction of an additional 3,000 housing units in the West Bank on Jan. 31. The very next day, the prime minister informed the Amona residents in particular and the settlers in general that following the forceful eviction, the government would promote the establishment of a new settlement. This new settlement would house not only the 40 families who were evicted from the illegal Amona settlement, but would accept roughly 300 other families. But then came the unexpected statement of the White House press secretary.

So what led the White House, perceived as the dream come true of the Israeli right wing, to release a “warning statement” to the Netanyahu government?

According to a high-level Palestinian source who spoke to Al-Monitor on condition of anonymity, the one responsible for the turnabout in the Trump administration is Jordanian King Abdullah II. Ever since the election of the new president, Abdullah has been playing a key role in the complex relations between the White House and the Palestinian Authority (PA).

So far, Washington has ignored all efforts and feelers sent out by senior PA officials to lay the basis for communication channels with the new administration. For example, London-based newspaper Asharq al-Awsat reported Feb. 2 that Saeb Erekat, the PLO secretary-general and Palestinian President Mahmoud Abbas’ senior adviser, had tried to open a communications channel with the White House. His goal was to counterbalance the president’s pro-Israeli views with regard to the Israeli-Palestinian conflict. However, these efforts were in vain. Therefore, the only choice open to the Palestinians was to make use of those Arab leaders who have Trump’s ear, to act as intermediaries.

According to the Palestinian source, when the Palestinians discovered that Abdullah was scheduled to meet Trump in Washington during the traditional National Prayer Breakfast event, Abbas made a special trip to Amman. There he asked the king to pass on a message of reconciliation to Trump. “At the time, King Abdullah was not certain that he would meet with the president. But in any case, he was asked to pass on a message to the new US president if it became possible to do so. The message to Trump was a plea to take action as soon as possible to stop Netanyahu’s crazy settlement enterprise before it would be too late,” the source said.

On Feb. 2, Abdullah met with Trump and transmitted the message faithfully: Abbas is committed to doing everything he can to give the US administration all tools possible for opening a Palestinian dialogue with Israel, and that one-sided actions on Israel’s part would undermine these attempts. According to the source, “In the short time he had before the Hilton event, in his pleasant manner, and with well-reasoned explanations, King Abdullah reviewed with Trump the dangers of Israel’s unrestrained [settlement] policy. Abdullah explained that this policy is likely to lead to unwelcome flare-ups [in the region].”

Abdullah also told Trump in their short conversation that instability and violence in the territories is likely to cause the strengthening of extremist forces in the Middle East. In addition, he explained that if Israel’s settlement wave will continue at this rate, Abbas will not be able to conduct any kind of dialogue with Israel and that the two-state solution — which the United States officially supports — will never be realized.

According to the source, Trump listened to Abdullah but did not explicitly commit himself to taking any action. At the conclusion of their meeting, the Jordanian news agency released a statement from the king’s spokesperson. According to this statement, the leaders agreed to the importance of strategic relations between the two countries; the need for cooperation in the fight against terror; the importance of promoting peace and security for the Syrian nation; and the need for ratcheting up the efforts to resolve the Israeli-Palestinian conflict.

The definitive American answer arrived the day after the meeting, which was the statement by Spicer. True, the statement was carefully and cautiously worded — but its message was clear: The existing settlements in the territories are not obstacles to peace, but reinforcing or expanding them “may not be helpful in achieving that goal [of peace].”

The Palestinians are certain that Abdullah will continue to serve as their efficacious and preferred address for transmitting messages to the Trump administration, at least temporarily. They do hope that more effective communication channels and contacts will be opened and institutionalized between the White House and the PA.

So far, the PA has moved very cautiously and adopted prudent steps. They feared that any impulsive reaction on their part could anger the hot-tempered president and cause him to barricade himself behind walls that will be difficult to remove later on. This policy has borne fruit, at least with regard to one issue: the relocation of the US Embassy from Tel Aviv to Jerusalem. While the relocation had, at first, seemed to be inevitable, it no longer appears (at least for the moment) on the Trump administration’s agenda. And afterward, Israel received a warning message regarding the settlements. The Palestinians could not expect anything more.