Although Prime Minister Benjamin Netanyahu has done nothing to advance a two-state solution, his repeated assertions in support of it have nonetheless shifted thinking in the Likud Party. 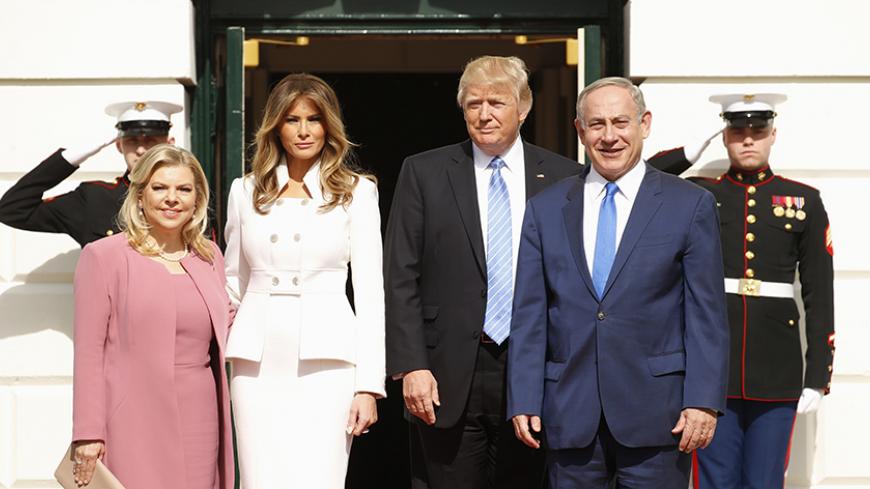 Prime Minister Benjamin Netanyahu took off for Washington Feb. 13 for his first official meeting with President Donald Trump. Meanwhile, back in the Knesset, the Likud faction's chamber was packed with people attending the conference “Renouncing the Two-State Solution.” Particularly conspicuous among the assembly of Knesset members and heads of local and regional authorities were several Likud ministers, including Gilad Erdan, Ofir Akunis, Gila Gamliel and even the Speaker of the Knesset Yuli Edelstein. All in all, about half of the party's Knesset faction attended the event, sponsored by the Nationalist Staff of the Likud, a faction identified with the settler movement. The turnout was especially impressive considering that most of the attendees do not bother to attend weekly party meetings with the prime minister.

While it may have been important for them to demand that Netanyahu renounce the idea of a two-state solution, what these Knesset members and ministers wanted most was to score political points with the party's hard right. Netanyahu had only been informed about the event the day before it took place. In that space of time, he also heard the chairman of HaBayit HaYehudi, Naftali Bennett, demand that the two-state solution be buried. Nevertheless, as Netanyahu stood on the ramp to his plane, he declared, “I will lead, and I will navigate. That's exactly what I plan on doing, leading and navigating the historic alliance between Israel and the United States so that it benefits Israel's national interests and the Israeli people.”

Netanyahu's remarks were aimed at all those ministers who were taking advantage of his meeting with Trump to create the impression that they were forcing him to take a hard-line position. Bennett and all the Likud's ministers, Knesset members and activists with a strong ideological bent know that Netanyahu has absolutely no plans to issue a public renunciation of the two-state solution as they are demanding. They are simply taking advantage of the high-profile meeting between the US president and the prime minister for their own personal needs.

Netanyahu has no intention of renouncing the two-state solution, which he first publicly supported in June 2009 in his famous Bar Ilan speech after being pressured by President Barack Obama a few months before the start of his second term as prime minister. Then, like now, Netanyahu announced his support for the idea but added certain qualifications, which made it impossible for the Palestinians to adopt his two-state principle as the basis for negotiations. His demands ranged from the Palestinians recognizing Israel as the “state of the Jewish people” as a prerequisite for any negotiations to insisting that any future Palestinian state be demilitarized. As far as Netanyahu was concerned, he had found the perfect formula to prove his goodwill to the world while also presenting Palestinian President Mahmoud Abbas as the one blocking all attempts to reach a peace agreement.

Even now, with an allegedly pro-settler president occupying the Oval Office, Netanyahu has no intention of abandoning the idea of a two-state solution. He realizes that it would be diplomatic malpractice on his part otherwise, so he continues to declare his commitment to the idea. Hence, in his interview with the CBS newsmagazine “60 Minutes” Dec. 11, Netanyahu said he still believes in two states living side by side in peace and that he wants Trump to help him achieve that.

In the Security Cabinet meeting the day before flying to Washington, Netanyahu continued to defend his commitment to a two-state solution, ostensibly at least. According to leaks about the meeting, Netanyahu told his ministers that even in his first call with Trump, on Jan. 22, two days after Trump's inauguration, he had reiterated his support for two states, but added that the Palestinians are the ones rejecting the offer, making such a solution impossible to achieve at present.

In hindsight, Netanyahu, as leader of the right, made the most significant contribution to softening attitudes toward a two-state solution within the Likud and on the right in general. The watermark was his Bar Ilan speech. Years later it is hard to imagine, but at the time, the very fact that Netanyahu had uttered “Palestinian” and “state” in a single phrase was shocking. Until then, he had managed to avoid the term, even though he was forced to implement the Oslo Accords during his first term as prime minister, 1996-99.

Ever since the Bar Ilan speech, Netanyahu has reiterated his support for a two-state solution on countless occasions. He repeated it in meetings with Obama and other world leaders and in speeches to the Knesset and his Cabinet. For almost a decade now, Netanyahu, leader of the right, has been identified with the two-state solution, and his repeated support has had a cumulative effect. Although Netanyahu has taken no practical steps toward being able to implement the idea, there has been a shift in mindset among most Likud voters and supporters. In the past, the idea of two states had been a red flag for the party's hard-core supporters, who advocated the idea of the Greater Land of Israel. Now they appear resigned to accepting a two-state solution.

Furthermore, not one of the Likud ministers or dozens of party activists who went to the Knesset on Feb. 13 to demand that Netanyahu “abandon” the two-state solution would dare demand that he reoccupy Nablus, Hebron or Ramallah, which Israel withdrew from as required by the Oslo Accords. They would also not demand that Israel reoccupy the Gaza Strip. There is a very simple reason for this.

As one Knesset member from Likud told Al-Monitor on the condition of anonymity, “Members of the Likud do not want to see the IDF [Israel Defense Forces] back inside the Palestinian towns, and certainly not in Gaza. They realize that it would not be a good thing. I no longer hear members of Likud fighting for the idea of a Greater Land of Israel, and Netanyahu played an important role in that. After repeating his support for a two-state solution time and time again, the idea has been absorbed by the movement.”

It is quite clear that the aforementioned member of Knesset attended the Feb. 13 meeting because it was politically expedient. He is not willing to be quoted by name because he also wants to leave the party's hard right with the impression that he, too, is an ideologue.