A new poll confirms that while Israelis support Prime Minister Benjamin Netanyahu and his right-wing government, they also support the two-state solution. 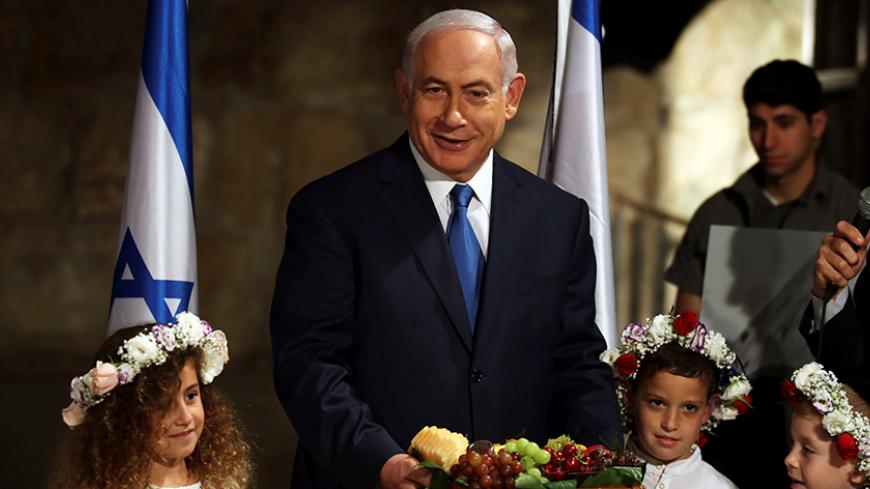 Israeli Prime Minister Benjamin Netanyahu holds a basket of fruit he received from local children, a custom associated with the upcoming Jewish holiday of Shavuot, during a special Cabinet meeting held in the Western Wall tunnels in Jerusalem, Israel, May 28, 2017. - REUTERS/Gali Tibbon

President Donald Trump's visit to Israel May 22-23 had a dramatic impact not only on the political arena, which was jolted awake after a long period of lethargy, but on Israeli public opinion. The Likud, headed by Prime Minister Benjamin Netanyahu, would win around 30 seats if an election were held today, according to a poll released May 26 by Channel 2. It is the continuation of a trend that shows a significant rise in support for Netanyahu compared with previous polls.

The most recent poll has given Netanyahu a few more reasons to revel in the euphoria that has taken hold of him ever since Trump landed in Israel. The strengthening of the Likud came at the expense of Yair Lapid, whose Yesh Atid party continues to grow weaker: The poll indicated it would win just 22 seats, compared with the 24 and 26 seats predicted in previous polls. And yet Lapid is still considered the greatest threat facing Netanyahu in the next election.

Naftali Bennett, the chairman of HaBayit HaYehudi, has also challenged Netanyahu's leadership, and even expressed a desire to replace him as head of the right-wing national camp. Nevertheless, he has also seen a decline in the polls, which predicted his party would win just nine seats. It looks like Bennett's strategy of flanking Netanyahu from the right is not bearing any fruit, at least at this stage. In response to the question, "Who is best suited to be prime minister?" Netanyahu has a significant lead over all his competitors (35% think he is best suited). Lapid comes in second (14%), but trails by a significant gap.

The most interesting result of this poll, however, is that it shows that most Israelis support the creation of two states, one Israeli and the other Palestinian. Of the respondents, 47% said they support a diplomatic arrangement based on the 1967 borders — but keeping the major settlement blocs — while 39% opposed such an arrangement.

This finding reflects a certain dissonance in the positions of many Israelis. On the one hand, in Knesset elections voters have moved steadily to the right, electing an unabashedly right-wing government in 2015. On the other hand, Israelis still believe that an arrangement can be reached with the Palestinians based on a two-state solution. Today, Bennett heads the only coalition party to demand the two-state solution be taken off the table. The fact that he has failed to take off in the polls further indicates support for the latter position.

Everything that has happened since Trump's election points to the idea that Netanyahu is an outstanding diplomatic tactician. The prime minister did not succumb to enormous pressure from the right, and he continued to support a two-state solution publicly. Nevertheless, he also insisted that Palestinian President Mahmoud Abbas is an opponent of peace who heads a Palestinian campaign of incitement against Israel. Netanyahu uses this to explain why he has avoided making any practical moves toward reaching an agreement.

Even if Netanyahu has done nothing to advance a two-state solution, he has flirted with the idea ever since he returned to power in 2009. There are two reasons for this: the need to contend with international pressure, and the results of internal polls, with which he is so familiar. The two-state solution still has significant support among the party center and the moderate right, a political bloc that could potentially offer many votes to the Likud.

Apart from its political significance, it is worth considering support for a two-state solution on the 50th anniversary of the occupation (since the 1967 war), with a right-wing government at the helm and many Israelis feeling frustrated and exhausted after long years of intifada and terror.

Ever since the 1993 Oslo Accord, and despite last decade's second intifada (2000-2005) and the intifada of individuals of the past few years, the public continues to support an arrangement based on the creation of a Palestinian state. While support for this has been worn away, it is quite obvious that it still exists.

After Netanyahu explicitly declared his support for a Palestinian state in his 2009 Bar Ilan speech, polls showed that support for him increased significantly. According to a poll conducted at the time by Haaretz daily, 71% of the public thought Netanyahu "said the right things." The more important finding, however, was that Netanyahu kept his political base despite what he said. Some 90% of Likud voters even agreed with the content of his Bar Ilan speech.

Much has been written over the last few years about how the far right has taken over the Likud ever since members of the settler movement joined the party en masse. Party members select the Likud's list for the Knesset, which means that to climb the ranks of the party's Knesset list, candidates are forced to present extreme positions. The result has been a situation in which the Likud's leadership is much further to the right than most party voters.

In 2004, when Prime Minister Ariel Sharon decided to disengage from Gaza, he polled Likud members about his decision and was soundly defeated. The far right already dominated the party's membership rolls and proved its strength. In a display of real leadership, Sharon went ahead with the plan anyway, and then divided the party to form a new centrist party, Kadima. Polls showed that the new party led by him would receive as many as 40 seats. While Sharon did not lead the party in the next election (he suffered a hemorrhagic stroke in 2006), he proved that a decision based on leadership has power, unlike decisions based on the positions of some extremist party mechanism. If Netanyahu were to lead some similar move, he might lose the support of the Likud's far right, but he would also win numerous seats from the center, a bloc that now lacks political leadership.

At this point, Netanyahu is not expected to make such a turnabout. While he will continue to flirt with the idea of a two-state solution, he will not take steps to achieve it. Instead, he will continue to worry about losing his right-wing base to Bennett, even at the cost of giving up seats he could win from the center and making any meaningful progress in the diplomatic process.