Why some in Israel are wary of Hamas’ new Gaza boss

Israeli security experts disagree whether the new Hamas leader in the Gaza Strip, Yahya Sinwar, will escalate tensions with Israel or adopt a pragmatic approach. 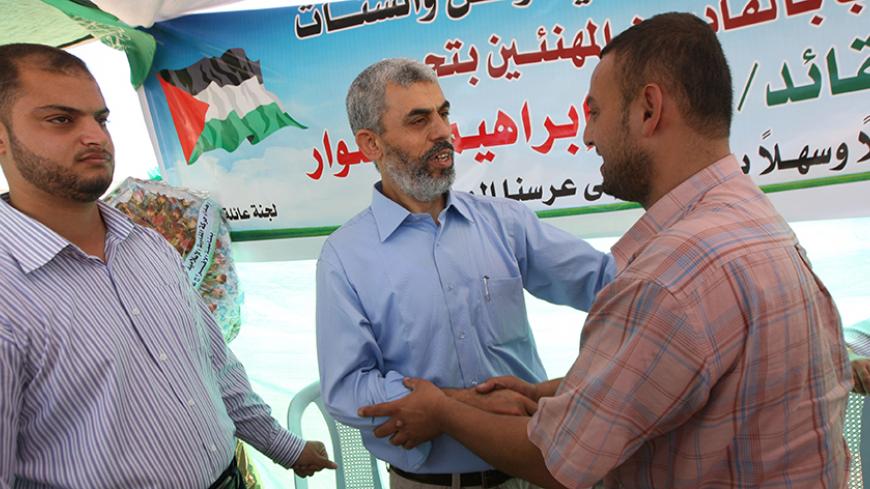 It seems there has never been a leader of Hamas better known to Israel than Yahya Sinwar, who was chosen this week in an internal process to succeed Ismail Haniyeh as the head of the political wing of the organization in the Gaza Strip. And vice versa: Sinwar spent 22 years in an Israeli prison and was released in the Gilad Shalit prisoner exchange deal in the fall of 2011. He speaks Hebrew, is familiar with the ways of Israeli society and knows everything about the Israeli mentality, abilities and sensitivities.

Since Sinwar was chosen, an interview he gave in 2006 to journalist Yoram Binor, in fluent Hebrew, has circulated online: In the interview he said, among other things, “We understand that Israel is sitting on 200 nuclear missiles. … We don’t have the ability to disarm Israel.”

A decade ago, Sinwar suffered severe pain in his head, which made him panic. It was Israel that saved his life. He was diagnosed with a brain tumor and recovered after emergency surgery at an Israeli hospital. On Feb. 14, an Israeli prison service officer said that at that time Sinwar was panicked, feared for his life and was grateful for the quick and professional medical care he received.

This appreciation has dissipated over the years. Israel views Sinwar as one of the most extreme leaders in the history of Hamas, and many senior Israeli officials fear that his election to head the political arm in Gaza will make Hamas more extreme and contribute to a hastening of the next cycle of violence between Israel and the Gaza Strip.

Others believe that Sinwar will surprise everyone. “In fact, because he is aware of the limits of force and knows the Israeli side so well, Sinwar will not rush to involve the organization and residents of Gaza in another round of violence,” a senior Israeli security official told Al-Monitor on condition of anonymity. “It’s true, his views are very extreme, but his outlook is pragmatic and he is responsible and level-headed. He doesn’t have the spark of madness there is in [Hamas military commander] Mohammed al-Deif.”

Most astonishing, said a senior Israeli security source, is that Sinwar categorically opposed the Shalit deal, even though he was one of the senior Palestinian prisoners who were slated to be released in its framework. “His opposition was so forceful and influential that we had to transfer him to solitary confinement in order to isolate him at the critical moments of the negotiations. We feared his influence would cause head of the military arm Mohammed Jabari not to sign the deal with Israel,” said the source, speaking on condition of anonymity.

Sinwar thought Israel should release many more prisoners than it did. He was one of the senior Palestinian prisoners and led a rather comfortable life in prison: Thanks to his seniority, Sinwar enjoyed meals cooked for him by other prisoners and sat at the head of the “Usra,” a secret Hamas class that operated in prison, composed of the most senior members, who established and disseminated policy.

Sinwar’s stance regarding Palestinian prisoners is intransigent. According to the Israeli security establishment, Sinwar will rededicate the organization to the capture of Israeli soldiers, knowing that this is the most effective tool Hamas could use against Israel’s military might. “He is a murderer,” a senior Israeli source who knows Sinwar up close told Al-Monitor on condition of anonymity. “The blood of 12 collaborators whom he himself eliminated are on his hands; he planned many terrorist attacks; he is one of the founders of the military arm of Hamas, along with Deif and Salah Shehadeh and others. He led the hawkish and belligerent line against Israel for many years, such that even [Hamas spiritual leader] Sheikh Yassin wanted to calm him down, so that he wouldn’t rise to the top of our wanted list.”

Despite everything outlined above, Israel has a significant estimation of Sinwar’s abilities. “He’s ascetic, very wily; he has a quiet charisma. He doesn’t speak with a loud voice, but when he talks everyone is quiet. He’s an activist, modest, considered very noncorrupt, and is scrupulous about keeping his hands clean [of corruption]. He grew up in the sewers of Khan Yunis [in Gaza], and was one of the architects of the first intifada and one of the founders of the Hamas military arm. Sinwar is a natural leader for Hamas, and I believe that he will draw the military and political arms closer, and even unite them into one body. This is not especially good news,” the Israeli source said.

Until now, the political arm had been considered the moderating side in Hamas in its interactions with Israel. Its leaders have not been eager when it comes to conflicts and wars. Now that Sinwar is taking the reins, these differences could blur significantly, Shin Bet sources told Al-Monitor. The question of whether it is bad or good for Israel remains to be seen.

Some in Israel believe it is not necessarily bad. It could be a man like Sinwar who suddenly grasps the bigger picture, not just the next Qassam rocket or attack tunnel. “'You see things differently depending on where you are' is not just an Israeli proverb,” said a high-ranking Israeli source, speaking on condition of anonymity. “It may be that Sinwar will actually be the one to restrain the military arm. He knows how to talk with Deif and his brother [Mohammed Sinwar], who is considered one of the senior brigade commanders in Gaza. They will not scare him as they scared Haniyeh. The new situation has a lot of risks, but many opportunities as well.”

The last stages of the negotiations of the Shalit deal were very dramatic. Israel rejected a large portion of the names of senior Palestinian prisoners in Israeli prisons and agreed to release the others on condition that they not be released in the West Bank, where they could reignite the intifada.

One of those released to the Gaza Strip was Sinwar. His becoming boss of Gaza is not really surprising to Shin Bet chiefs. While they saw this as a likely scenario, they did not necessarily wish for Sinwar to become the head of the political arm.

“Israel will know how to deal with the new situation,” an Israeli minister expert on these issues said in a conversation with Al-Monitor, on condition of anonymity. The minister said, “Israel is forming a new carrot-and-stick policy toward the Gaza Strip. The situation in Gaza is bad and its worsening could lead them and us to a blowup that no one really needs. If the Gazans understand that there is a real chance to improve their situation, on the condition that they improve their conduct [vis-a-vis Israel], there is a chance of breaking the cycle of violence and it would happen with Sinwar or without him. If the light at the end of the tunnel does not turn on,” the source added, “then the eruption will happen, with or without Sinwar.”