The real story behind secret Aqaba summit on Mideast peace

According to reports, Israeli Prime Minister Benjamin Netanyahu participated a year ago in a secret meeting in Aqaba with US Secretary of State John Kerry, Jordanian King Abdullah II and Egyptian President Abdel Fattah al-Sisi. 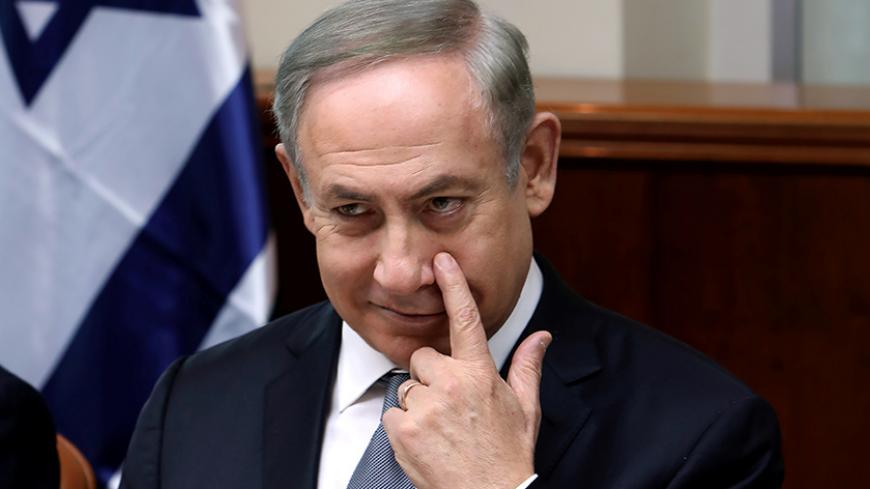 Zionist Camp leader Isaac Herzog kept the secret for a year. He did not reveal the existence of a summit held in Aqaba in February 2016. The summit was attended by Israeli Prime Minister Benjamin Netanyahu, US Secretary of State John Kerry, Jordanian King Abdullah II and Egyptian President Abdel Fattah al-Sisi. The existence of this summit, designed to promote a regional peace initiative, was revealed Feb. 19 by Haaretz correspondent Barak Ravid. It turns out that this regional powwow was the basis for talks held between Herzog and Netanyahu about establishing a unity government with the Zionist Camp. Ultimately, the coalition negotiations did not bring about a national unity government. It also did not lead to a historic regional agreement.

At the time, Herzog did not detail his considerations for entering into negotiations with Netanyahu over joining the government, even though he saw how his party was plunging in public opinion polls. The Israeli public, together with most members of Herzog’s party (they did not know about the secret summit in Aqaba), did not believe that Herzog held marathon discussions with Netanyahu out of purely patriotic considerations.

Even Palestinian President Mahmoud Abbas, who is frequently called a peace rejectionist by the Israeli right, kept the existence of the summit a secret. According to Ravid’s article, it was Netanyahu who retreated from the regional peace initiative. Herzog claimed, in an interview with Channel 10, that Minister Yariv Levin convinced Netanyahu that such a deal by the prime minister would likely dismantle the Likud and create pockets of resistance to his regime.

According to a high-placed Palestinian source who spoke with Al-Monitor on condition of anonymity, Abbas had been briefed about the summit before its existence and afterward as well. After the summit he received from Kerry, Abdullah and Sisi other explanations for its failure. According to the source, Abbas was expressly told that after the Aqaba summit, Netanyahu returned to Jerusalem where he did some soul-searching. Despite participating in the summit, Netanyahu remained unwilling to make the compromises needed for such a regional process. According to the source, Netanyahu reached the conclusion that including Egypt and Jordan in a complex process necessitating painful Israeli concessions might create a crisis in relations with these countries. It is not known if Netanyahu made this decision alone, or whether it was in consultation with close associates or advisers such as Levin.

According to the source, it was Kerry who initiated the summit and not Netanyahu. Nevertheless, after the expose in Haaretz, Netanyahu announced in a meeting of Likud ministers that he had initiated the parley. But Herzog, in his interview with Channel 10, also said that as far as he knew, Kerry had organized the summit. This was after the direct negotiations between the Israelis and Palestinians, which were initiated by Kerry, had collapsed in the spring of 2014.

The Likud ministers and members of the security Cabinet were left in the dark about the summit in Jordan, and they were not given reasons why Netanyahu would have changed his mind about initiating or advancing a regional move. Therefore, the Israeli version of events is, as of now, a mystery. But the Palestinian side has some educated guesses.

“We know that Netanyahu came to Aqaba to trip up Kerry’s plan and to sabotage any possible peace initiative, whether for domestic Israeli political reasons or other excuses,” argued the Palestinian source. According to the source, members of Abbas’ bureau feel that Netanyahu was afraid that Abdullah, Sisi and Kerry would put pressure on Israel to forfeit and evacuate the settlements while supporting and encouraging Abbas. “And Netanyahu would find it hard to ward off [that kind of unified pressure]. But it is also possible that he simply had no intentions of committing to any kind of process and just continued going through the motions that we’ve become familiar with over the years. Yes, he says that he’s committed to the peace process, but in talking not in action,” the source said.

But why, then, did Abbas keep the summit a secret, we asked. The source answered that all participants involved in the summit were sworn to secrecy, and the Palestinian president adhered to the same understanding.

But it does seem that the concept of a regional summit for promoting the peace process with the Palestinians has not died. In the White House meeting Feb. 15 held between President Donald Trump and Netanyahu, it was the latter who raised the possibility of involving Arab countries in promoting the peace process. “So I didn't know you were going to be mentioning that, but that's — now that you did, I think it's a terrific thing,” Trump said, “I think we have some pretty good cooperation from people that in the past would never, ever have even thought about doing this. So we'll see how that works out.”

It is unclear why Netanyahu returned to the regional formula that he buried after the Aqaba summit or why he is doing so even before discussing the core issues involved or sending out feelers to the Palestinians about how they feel about the initiative and how they see themselves fitting into the process later on. Perhaps Netanyahu feels that he will be able to receive stronger support and backup from the new Trump administration, as opposed to the Obama administration of yesteryear. If Trump shows that he stands by Netanyahu, this could counterbalance the support for the Palestinians given by other Arab leaders: Saudi King Salman bin Abdul-Aziz Al Saud, Abdullah and Sisi.

One way or the other, the Palestinians are rubbing their hands in glee; they are convinced that this time, Netanyahu can’t repeat his disappearing act and ignore his promises for a diplomatic process. What he strangled a year ago at the Aqaba submit (they think), he will now be forced to bring back to life. The Palestinians are convinced that very soon, Netanyahu will have to prove to Trump and to Arab leaders that he is serious and not just making empty promises. “We’ll know soon enough,” summarized the Palestinian source, “because things are happening a lot faster than we anticipated.”