The European Union and the United States are elaborating three options to revive the peace process: renewing talks on the basis of latest understandings, an international conference or a unilateral American statement on a framework agreement. 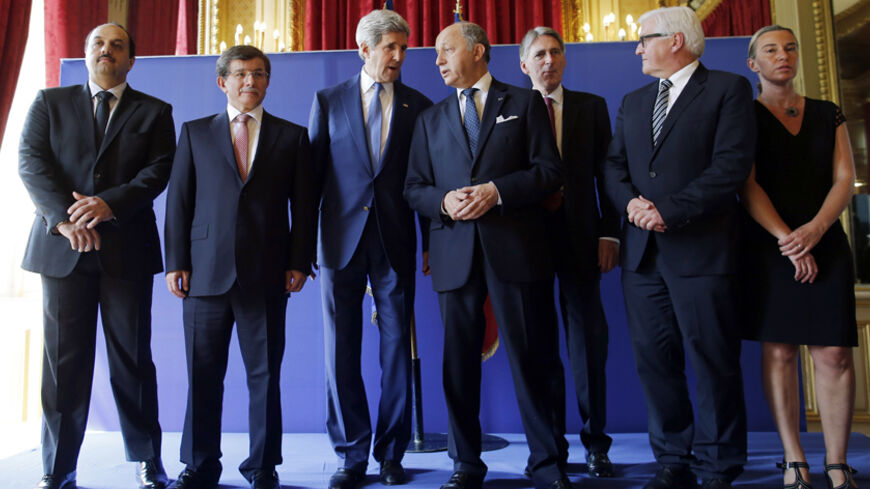 The danger of a religious war over Jerusalem sounded alarm bells across many capitals in the region and around the world. "We shall not let the [Naftali] Bennetts and the [Ismail] Haniyehs drag us into a regional explosion," a senior State Department official told Al-Monitor, following the meetings convened by US Secretary of State John Kerry in Amman on Nov. 13 with Prime Minister Benjamin Netanyahu, Palestinian President Mahmoud Abbas and Jordanian King Abdullah II.

The Amman summit produced only a bandage for the bloodshed in Jerusalem. Netanyahu, according to the State Department source, went a long way to pacify the king of Jordan. It was clear in the meeting that the mere existence of the 1994 Jordanian-Israeli peace treaty was at stake. Not only did the prime minister give guarantees to uphold the status quo on the Temple Mount, but both his interlocutors (Kerry and Abdullah) also understood that Israeli construction in East Jerusalem would be curbed. Netanyahu was apparently shocked by the demons he himself helped create. Abdullah called in the meeting for an urgent renewal of the Israeli-Palestinian peace talks, yet Netanyahu could console himself by the fact that Kerry did not seem inclined to jump into such a waterless pool. Without a clear commitment to border demarcation on the basis of the 1967 lines, talks will not be renewed.

Aaron David Miller, vice president of the Woodrow Wilson Center and a key player on the Clinton Middle East team, told Al-Monitor: "The peace process is like rock and roll — it will never die. But chances of getting negotiations back on track now seem doomed. You have Israeli and Palestinian leaders who won't lead; huge gaps on core issues; deep mistrust between the parties; and an unstable regional environment that makes sustainable and successful negotiations difficult, if not impossible."

Netanyahu continues to stick to his three no's: no border, no settlement freeze, no negotiations. He made this clear to the new EU High Commissioner on Foreign and Security Affairs Federica Mogherini at their Nov. 7 meeting in Jerusalem. Diplomatic sources in Brussels tell Al-Monitor that British and French foreign ministries discussed recently with the State Department a more solid rescue operation for the current situation. Europe is worried about an Islamic emotional outburst on the issue of Jerusalem, and in the view of the European leaders, only a renewal of the peace process can stop the ongoing process of spiraling violence.

These discussions between London, Paris and Washington focused on different options for a Middle East peace process rescue operation:

The chances of a second Kerry mission are very slim. The foreign policy orientation emanating from the White House these days focuses primarily on economic deals with China and Asia, and on the struggle against the Islamic State in Iraq and Syria. President Barack Obama's opinion of Netanyahu is well known and it is unlikely that he will embark on a policy initiative that depends on the Israeli prime minister for it to succeed. Netanyahu himself is focused on the Israeli ballot box and on Palestinian bullets. Netanyahu's policies will, like his rhetoric, move to the right, while doing the minimum necessary to prevent an intifada. On one side, he has launched a flamboyant propaganda campaign against Abbas, accusing him of encouraging terror. On the other side (so Al-Monitor was told by Israeli security officials), he sends envoys to Abbas and to his security apparatus leadership to ask them to reinforce the anti-terror coordination. Netanyahu thrives on such contradictions.

Abbas is also not very enthusiastic about the American feelers concerning a renewal of the peace process, yet he also rejects an intifada. He is engaged in a bitter struggle with Hamas, both in the West Bank and in Gaza. The two organizations accuse each other of wrongly taking money from Gaza aid funds — Hamas is blamed for the renewal of missile production, and Abbas for West Bank development at the expense of Gaza. Most probably, both sides are right. It's a struggle over the hearts and minds of the Palestinian people and, according to an Oct. 10 Palestinian poll, Abbas has the upper hand so far.

So, while the international community is exploring, almost against all odds, new ways of rescuing the peace process, the leaders of Israel and Palestine are catering to the most nationalistic sentiments of both public opinions. They are prophesying violence by the other side, which may become a self-fulfilling prophecy.