After the first meeting between Israeli Prime Minister Benjamin Netanyahu and US President Donald Trump, Israeli leaders are confused about the future of the peace process. 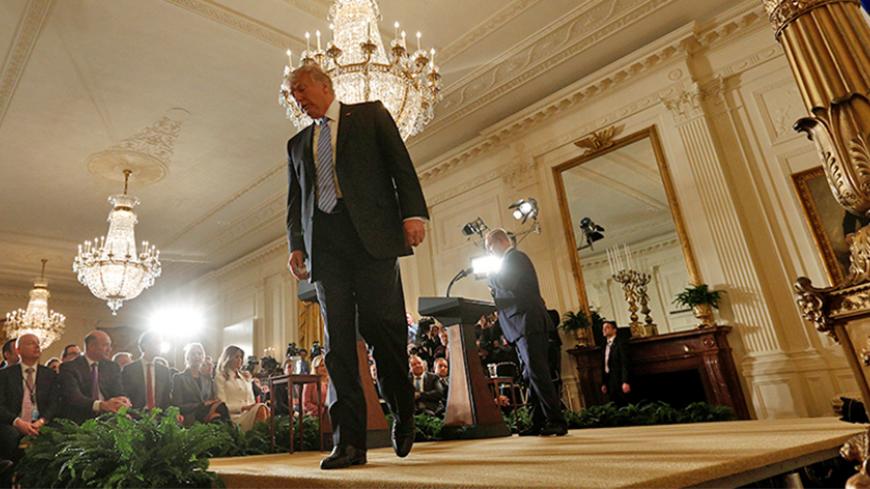 US President Donald Trump walks from the lectern as Israeli Prime Minister Benjamin Netanyahu lingers behind at the conclusion of their joint news conference at the White House in Washington, Feb. 15, 2017. - REUTERS/Kevin Lamarque

After the cheery press conference of US President Donald Trump and Israeli Prime Minister Benjamin Netanyahu on Feb. 15, it took more than two hours for Zionist Camp and Israeli opposition leader Isaac Herzog to respond to the event. In media terms, it was an eternity, as evidenced by comments from political pundits and in the WhatsApp group of the Zionist Camp's spokesperson. Everyone wondered why Herzog's response was so late in coming. When it finally arrived, it was relatively short: “It was sad and embarrassing to see Netanyahu fidget and squirm, just so he could avoid the idea of separation from the Palestinians in the form of two states. Every Israeli should be worried by the very possibility of a single state between the Jordan River and the sea, since this means that there would be no Jewish state. That would be very dangerous, it would be a disaster.”

It seemed as if the opposition chairman had had difficulty finding the right words for the moment. After all, it would be hard to attack the prime minister after seeing him received like royalty at the White House by the leader of the free world. Meanwhile, Yesh Atid Chairman Yair Lapid simply dismissed requests for comment from journalists in the party's WhatsApp group. He may consider himself the real leader of the opposition, given his success in the polls, but in this particular case, he seemed to prefer to ignore what was happening.

Netanyahu's first meeting with Trump was a success by any standard. The long silences and measured responses by the leaders of the center-left were a sign of confusion in their camps. The eight years of the Barack Obama administration coincided with three Netanyahu terms, and during that time, Israeli political discourse followed a well-established pattern. The tense relationship between the two leaders over such diplomatic issues as Iran and the Palestinians would inevitably lead to attacks on Netanyahu from the center-left, which would accuse him of harming the relationship between Israel and the United States.

“You caused serious, ongoing damage to the strategic alliance between Israel and the United States,” Lapid accused Netanyahu at a press conference he called after being sacked as finance minister by him in December 2014. “Senators call me, trying to understand your condescending and disparaging attitude toward Israel's closest friend in the world, a country whose relationship with us is our greatest security asset. Go explain to them that you are so detached from reality that you still think America is caught in the 1980s. Yes, you used to understand America, but America has changed, and you are detached from it.”

Some two years later, Netanyahu was standing bright and cheery beside a new president of the United States who showered praise and affection on him and his wife, Sara. Most of all, the president refused to commit to the two-state solution as the only viable way to resolve the Palestinian-Israeli conflict. “So I’m looking at two-state and one-state, and I like the one that both parties like,” Trump said, taking an indifferent approach to the issue. In a press briefing after the men had met, Netanyahu told journalists that Israel never had a better friend in the White House.

The meeting between Netanyahu and Trump has presented Israel's center-left with a complex new reality that will force it to recalibrate and seek a fresh approach. For more than two decades, since the signing of the Oslo Accord under the aegis of the United States, the two-state solution was the only US policy in regard to the Palestinian-Israeli conflict. President Bill Clinton, a Democrat, was not alone in his efforts to advance this vision. His Republican successor, George W. Bush, did so as well, during the premierships of Ariel Sharon and Ehud Olmert. Obama followed it, too.

During Netanyahu's governments, envoys have come and gone, memoranda have been written and direct negotiations were held between Israel and the Palestinians. The vision of two states living side by side was the basis of the diplomatic program of the center-left, which is why it was always in accord with the US administration. Then Trump came along and reshuffled the deck.

What Trump effectively did was put the diplomatic ball squarely in the Israeli court. He is open to new ideas. He will not impose his own solution on the conflict. He will not take a firm stand against the settlements, nor follow a strict timetable or use assertive or threatening language. On the contrary, everything he does will be in good spirits. In a world where even the president of the United States doesn't believe that the two-state solution is the only way and doesn't chastise Netanyahu, it makes sense that Herzog and Lapid might need time to find the right words to respond.

When it comes to Lapid, the situation is even more complicated. He has long been trying to appeal to the right as part of his overall strategy. In the past, he never missed a chance to attack Netanyahu for the damage he had done to Israel's relationship with the United States. Going forward, he will be walking a tightrope. As someone who supports a two-state solution, he will have to find the right formula that allows him to continue to nod at the right while keeping his supporters among the center-left.

Lapid is fully aware that the right is celebrating Netanyahu's meeting with Trump. They consider it a victory. Unlike on the center-left, Knesset members and ministers from Likud and HaBayit HaYehudi are reveling in the chain of events and celebrating the “demise" of the two-state solution, as Science Minister Ofir Akunis calls it. Then there was HaBayit HaYehudi Chairman Naftali Bennett who boasted, “The Palestinian flag was today lowered from the mast and is being replaced by the Israeli flag.”

While the Netanyahu-Trump meeting signals the dawn of a new era, it is too early for the right to celebrate. This is not simply because Trump is likely to change his spots, as he is prone to do, but also because he has no intention of spearheading a solution to the conflict or imposing one on the region. In other words, Trump is leaving the future of Israel and the Palestinians to fate.

Israeli leaders on the right and the left will now have to reconfigure their diplomatic visions. The center-left will be forced to adapt to a new political reality in which the two-state solution is not the only option, at least according to Trump.