Israeli Prime Minister Benjamin Netanyahu's commitment to the two-state solution changes entirely depending on the public or person he is trying to please, and he couldn't advocate it at his Feb. 15 meeting at the White House even if he wanted to. 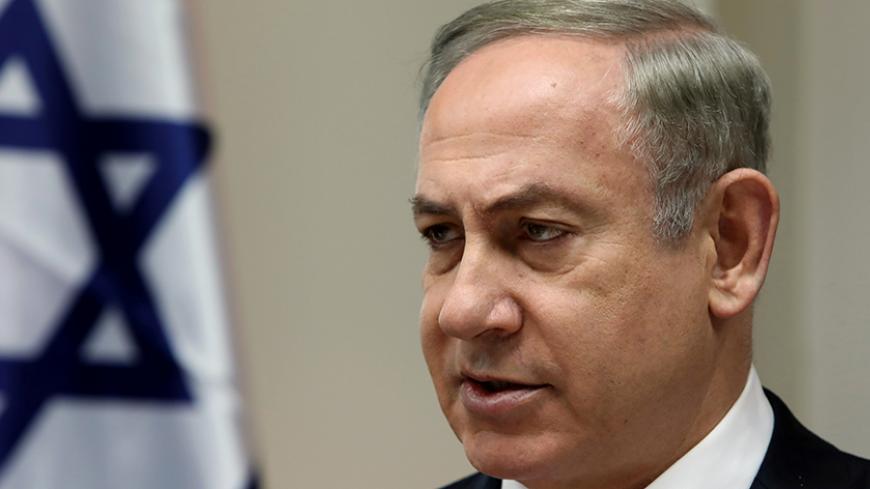 The stand taken this week by Israeli Prime Minister Benjamin Netanyahu regarding the Israeli-Palestinian conflict brings to mind the witticism of late Prime Minister Yitzhak Shamir, on the eve of his departure for the October 1991 Madrid Peace Conference: “The sea is the same sea, and the Arabs are the same Arabs.” In other words, only a fool would believe that the leaders of the Arab world and the PLO, who accepted the invitation of President George H.W. Bush to sit for the first time next to a Zionist leader, had come to terms with the existence of a Jewish state. And only a leftist defeatist would hand them any territories.

Netanyahu is formulating a slightly more refined version of the same approach. The prime minister argues that he does support a two-state solution, meaning the establishment of a Palestinian state alongside Israel, as he stated in his 2009 Bar-Ilan speech. But, woefully, the sea is the same sea, and the Palestinians remain the same Palestinians. At their Feb. 15 meeting in Washington, Netanyahu will try to convince his host, President Donald Trump, that those torpedoing the two-state solution are the Palestinians, who refuse to recognize Israel as the state of the Jewish people, and not the Israelis who have been keeping them under occupation for 50 years and stealing their land.

Already in their first phone call after Trump’s victory, Netanyahu tried to convince the president-elect that the peace process is stuck because of the Palestinian refusal to pronounce the magic formula “Israel is the homeland of the Jewish people.’’ This argument is presented to conceal the fact that Netanyahu will arrive at the White House without any government mandate to present an outline for a diplomatic arrangement with the Palestinians. He did not ask of his ministers nor did he receive any approval to offer the Arab states a comprehensive deal of the sort Trump referred to in an interview with Israel Hayom published Feb. 12.

As far as Palestinian President Mahmoud Abbas is concerned, recognizing Israel as the homeland of the Jewish people is tantamount to alienating Israel’s 1.5 million Arabs. Opposite him is Netanyahu’s coalition partner, HaBayit HaYehudi Chair Naftali Bennett, who has threatened that uttering the words “Palestinian state’’ in the Oval Office will set off a political earthquake.

Almost five years ago, in March 2012, Benny Begin, then a minister in the Netanyahu government, realized that the emperor was naked and that the “two-state solution” that the prime minister had offered was a sham. Meeting with students at the Hebrew University, Begin said the Bar-Ilan speech and the two-state concept had not even been brought up for debate by the government, nor would it be. “This is not the position of the government,” noted the Likud’s champion of democracy. “This is what enables someone like me to be a member of the government and to operate.”

In the March 2015 elections, Netanyahu portrayed himself as the sole force capable of blocking the left's attempts to establish a Palestinian state and to hand over territories to radical Islamist forces. “If you are prime minister, a Palestinian state will not be established?” one interviewer persisted. Netanyahu simply responded, “Indeed.”

Barely two months later, Netanyahu once again donned the emperor’s invisible clothes. The prime minister told European Union foreign policy chief Federica Mogherini on a visit to Jerusalem that he does not believe in a one-state solution for the two peoples and supports the establishment of a Palestinian state. He blamed the Palestinians for refusing to recognize Israel as the homeland of the Jewish people and blocking the advancement of negotiations.

All that’s left is to choose one of two options: perpetuating the rule by one people over another and thus undoing the democratic nature of the state, or annexing all the occupied territories and granting equal rights to all the inhabitants, thereby undoing the Jewish nature of the state. But Netanyahu is sitting on the fence, not choosing, and making his personal survival his raison d'etre. Before his very eyes, the demographics are making Israel the occupier less Jewish, and political reality is making Israel less democratic.

The right's nationalistic interpretation of the words “Jewish state” encourages the demonization of Jews who refuse to walk the path of the right and nurtures the hatred of others. Jewish nationalism is being used by the Netanyahu-Bennett-Miri Regev government to shatter democracy and equality. Thus the “national camp” headed by Netanyahu is removing the underpinnings of the good old Zionist vision.

The right-wing settlers turning Israel into a binational state have a loyal partner in the non-Zionist left. At the joint Jewish-Arab rally held in Tel Aviv on Feb. 4, I met many leftist activists who have lost all hope of a two-state solution. They cheered the leader of the Joint List, Knesset member Ayman Odeh, who called to replace the Zionist Camp (whose Knesset representatives absented themselves from the event) with the “Democratic Camp.” The difference between Odeh and Netanyahu is that the first proposes granting equal political rights to Jews and Palestinians living peacefully in one state, whereas the prime minister believes that the Jewish people will have to forever live by the sword, and democracy be damned.

The president who Netanyahu will meet at the White House Feb. 15 is not a Peace Now activist nor a romantic liberal. As Trump said over and over during the election campaign and in his inauguration speech, the interests of his country take precedence over every other consideration. This list includes the Netanyahu government’s insatiable appetite for private Palestinian land and the Palestinian desire to shake off the Israeli occupation. Trump has said more than once that he is interested in forging a “deal” that puts an end to their conflict. The controversial executive orders issued since he took office indicate that he's trying to practice what he preaches.

Shamir learned the hard way what happens to an Israeli prime minister when he tries to impose his will on an American president who does not fear the Jewish lobby. Shamir wanted to build settlements for Jews as well as get US aid for taking in Jewish immigrants from the former Soviet Union. He ended up being kicked out of the White House and out of power. We’ve already predicted that Netanyahu will one day miss President Barack Obama.