Iranian hard-liners took the government to task for allowing an event where female Swedish diplomats did not wear the hijab, while the Swedish women faced blowback at home too. 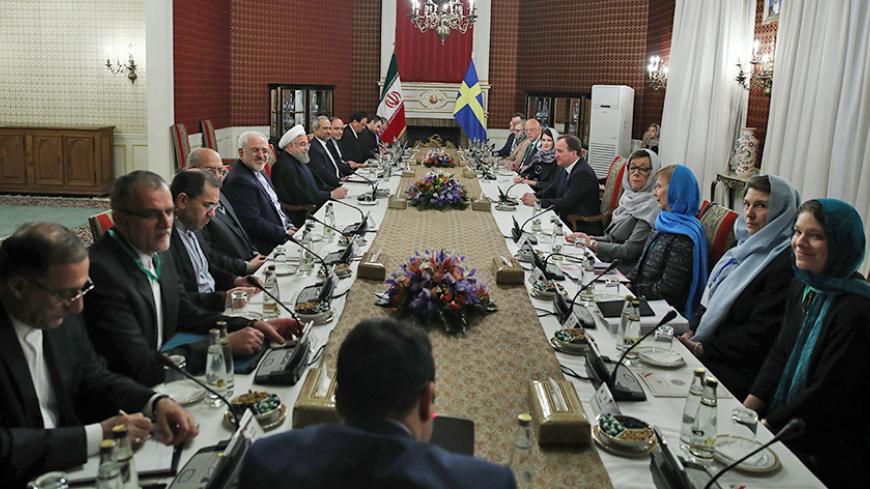 Members of the Iranian and Swedish delegations meet in Tehran, Feb. 11, 2017. - president.ir

The political engagement and business deals reached by Iran and Sweden during a recent official visit to Tehran were overshadowed by the attire, or lack thereof, of the female members of the Swedish delegation. Indeed, in the aftermath of the visit by the high-ranking Swedish political and business delegation, hard-liners raised a storm in the Iranian media by lashing out at the lack of observance of the Islamic hijab among Swedish women at a party where trade contracts were reportedly signed at the residence of the Swedish ambassador.

Swedish Prime Minister Stefan Lofven arrived in Tehran on Feb. 10 and was officially received by President Hassan Rouhani at Saadabad Palace. On Feb. 11, Lofven met with the supreme leader, Ayatollah Ali Khamenei, a rare invitation for a Western leader.

“You are known as a man of action and practical steps, and it is expected that you will act in such a way that agreements will not merely remain on paper,” Khamenei said to Lofven, referring to various agreements between Iran and some European governments “that haven’t been realized.” Iran and Sweden signed five memoranda of understanding involving technology, research, roads, information technology and women and family affairs during the Swedes' visit.

Hossein Shariatmadari, the chief editor of the hard-line Kayhan, wrote Feb. 12, “In an unexpected and questionable occurrence, the ceremony for signing trade contracts between Iran and Sweden was held at the residence of the Swedish ambassador and not our country’s official institutions.” He added, “Pictures of the mentioned ceremony indicate that the female members of the Swedish prime minister’s delegation were in attendance without [wearing] hijabs. It has been said that the Swedish prime minister and the ambassador had insisted that the ceremony be held at the Swedish ambassador’s residence so that these women could attend without [observing the] hijab.”

Iranian law states that all men and women — including visiting dignitaries, ambassadors and their staff — must observe the Islamic dress code. For women, this involves covering the hair. Hijabs are not mandatory on embassy grounds or at diplomatic residences. Deputy Foreign Minister for European and American Affairs Majid Ravanchi and other senior Iranian officials were in attendance at the Swedish ambassador’s residence.

“The Swedish politicians knew that the presence of high-ranking [Iranian] officials in the mentioned ceremony could suggest that our countries’ officials do not respect Islamic laws,” Shariatmadari wrote. “By making decisions such as signing contracts at the ambassador’s residence, sending diplomatic messages through email and Twitter and negotiating [with foreign officials] while strolling, the [incumbent] 11th government and the Foreign Ministry have fueled serious doubts that [they] want to … make foreign relations uncontrolled and out of sight of high-ranking officials.”

By “high-ranking officials,” Shariatmadari means the supreme leader, who appointed him editor. Moreover, the references to emails, Twitter and “strolling” all embroil Foreign Minister Mohammad Javad Zarif, who was vehemently criticized by hard-liners for exchanging emails and taking a walk with former US Secretary of State John Kerry during the nuclear negotiations that led to the Joint Comprehensive Plan of Action.

In keeping with Shariatmadari’s criticism, hard-line member of parliament Seyyed Hossein Naghavi Hosseini said in an interview Feb. 13, “[Signing] contracts and agreements outside an official [Iranian] venue and [instead] at the residence of an ambassador, who is our guest, is the diplomatic humiliation of the Islamic Republic of Iran and humiliation of the Iranian nation.”

The Iranian government was not alone in coming under attack over the wearing of the hijab. The Swedish government also took fire at home, but conversely, because officials did wear hijabs during the visit. Eleven of the 15 members of the Swedish delegation were women. Jan Bjorklund, the leader of the opposition Liberals, called the hijab a “symbol of oppression for women in Iran,” and alongside other critical voices, said that the Swedish delegation should have demanded exemptions from Iranian law.

Meanwhile, exiled Iranian activists also attacked the Swedish delegation for donning the head covering. Masih Alinejad wrote on her Facebook page, “This is a discriminatory law and it's not an internal matter when the Islamic Republic forces all non-Iranian women to wear hijab as well.” Swedish Trade Minister Ann Linde saw the affair from a different perspective, asserting that she and other female members of the Swedish delegation were obliged to respect Iranian law.

Swedish Foreign Minister Margot Wallstrom reacted much as Linde did. “If you go there [Iran] as a visitor, and especially if it’s an official visit, you observe the law. You do it out of respect for their legislation. You also follow diplomatic protocol,” Wallstrom said. “The important thing is what you bring up [during meetings] and what this visit is really supposed to be about. It was important to go there and have the important conversations that were held. You can then in other ways support what civil society and women’s organizations are fighting for. But it’s not the right opportunity, so you have to make a choice.”

Of Bjorklund's criticism, Wallstrom said, “He’s desperate for attention. What he is saying is ignorant.”

by Murielle KASPRZAK and Joseph SCHMID | AFP | May 26, 2022
END_OF_DOCUMENT_TOKEN_TO_BE_REPLACED