How Trump is already shifting domestic politics in Iran

US President Donald Trump’s threats against Iran are quickly morphing from a foreign policy issue to a domestic political football in Tehran. 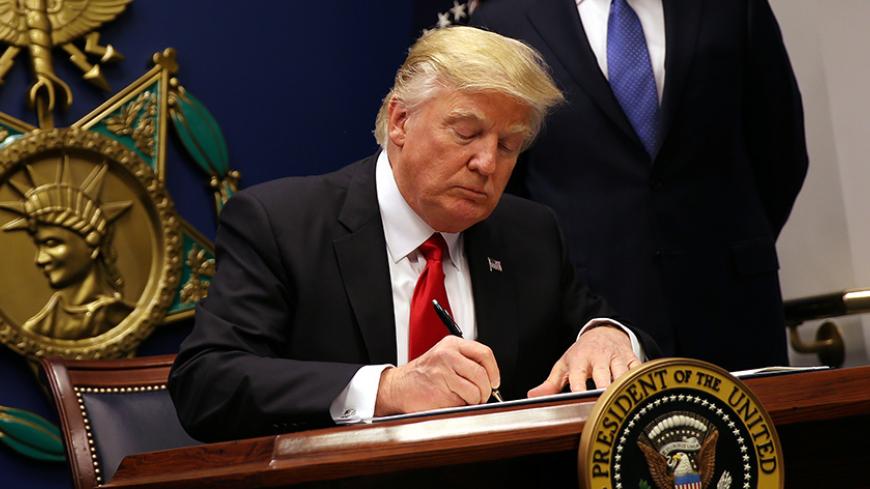 US President Donald Trump signs an executive order to impose tighter vetting of travelers entering the United States from seven countries, including Iran, at the Pentagon in Washington, Jan. 27, 2017. - REUTERS/Carlos Barria

Following a period of silence on Iran, US President Donald Trump has in past weeks once again addressed the topic in tweets and statements. He has issued stern warnings to Tehran about its behavior in the region as well as its ballistic missile tests. Moreover, on Feb. 5, in an interview with Fox News, Trump called Iran the No. 1 terrorist state. What has Iran’s reaction been to these threats and fiery rhetoric?

The supreme leader’s foreign policy adviser, Ali Akbar Velayati, was the first to react. On Feb. 2, he told reporters that Iran is not taking the threats seriously and that the behavior of the Trump administration will be detrimental to the interests of the American people. He also hinted at Washington’s limited options by remarking that the United States has not been able to achieve its aims in countries with much weaker military capabilities, alluding to neighboring Iraq and Afghanistan, while noting that Iran has a much stronger military than most countries in which the United States has failed.

Foreign Minister Mohammad Javad Zarif was also among the first to take a stance. On Feb. 3, the day that Trump warned Tehran not to play with fire, Zarif tweeted a video in which he is seen defending Iran’s right to develop missile technology in response to a question by a student at the University of Wellington in New Zealand in March 2016. In essence, Zarif told Trump that Iran is not about to stop defending itself.

A few days later, on Feb. 7, Iran’s Supreme Leader Ayatollah Ali Khamenei reacted to Trump’s threats, saying that no one has ever succeeded in achieving its aims by threatening the Iranian nation. On the same day, former Reformist President Mohammad Khatami called on the Iranian political establishment to promote national reconciliation and compromise, urging national unity. He also reiterated that in the face of a foreign threat, all forces loyal to Iran will consider it their duty to defend their country and the Islamic Revolution.

President Hassan Rouhani has also responded to Trump’s threats. On Feb. 10, on the occasion of the anniversary of the 1979 Islamic Revolution, he warned the US president, “Do not threaten Iran. Iran is not looking for tension and conflict in the region or in the world, but it will stand strong against threats and violence.”

However, of all the reactions by senior Iranian officials, parliament Speaker Ali Larijani’s response to the threats is perhaps the most noteworthy. In a TV interview on Feb. 12, Larijani asserted that the US’ goal in issuing threats and putting Iran under pressure is to enrage the Islamic Republic and that Tehran’s response should be to handle the situation wisely and calmly.

One important question is how Iranians are analyzing Trump’s threats. Al-Monitor spoke with Tehran-based expert on Iran-US relations Aziz Hatamzadeh. “Trump’s main goal is to create a tense atmosphere so that no one will engage in economic exchanges with Iran,” Hatamzadeh said. “Trump is not looking to start a war with Iran, and there are a few reasons for this. First, his No. 1 priority is the US economy and improving the American people’s living conditions, and in this vein, starting a new war could increase domestic discontent. Second, Trump’s main goal is to prevent Iran from enjoying the benefits of the Joint Comprehensive Plan of Action without actually violating its terms, which is why he is making these threats in hopes of dissuading the Europeans from investing in Iran.”

Among Iranian military personnel, the main focus is on maintaining readiness to confront possible threats. On Feb. 4, Brig. Gen. Amir Ali Hajizadeh, the commander of the Aerospace Force of the Islamic Revolutionary Guard Corps, declared that considering the power of Iran’s armed forces, he can confidently say that no foreign threat will work against Iran.

On the same day, the newspaper Vatan-e-Emrooz, one of the media outlets with close ties to the hard-line movement in Iran, dedicated its editorial to analyzing Trump’s threats. Pointing to Trump’s campaign pledge to pay more attention to the American people amid his criticism of Hillary Clinton with reference to the US military expeditions around the world, the editorial concluded that Trump’s threats against Iran should not be taken seriously.

One important point about Trump’s threats is that they not only affect foreign policy in Iran, but they also affect domestic politics. Indeed, in the same Feb. 4 editorial, Vatan-e-Emrooz argued that the very presence of Trump in the White House is a huge blow to the camp in Tehran, which favors engagement with the West. The editorial argued that Trump has made it impossible for the pro-engagement camp to continue presenting a dignified and polite image of the United States to the people of Iran and that it can no longer win elections by creating the dualities of war versus peace and improving livelihoods versus resistance against the West.

As election season approaches with the May presidential vote around the corner, there will be more discussions of this sort among Iranian political factions. Through Khatami’s call for unity in the face of Trump’s threats as well as Rouhani’s defiant speech on Feb. 10, the moderates and the Reformists are in essence pushing to the fore the benefits of a national reconciliation. However, in response, the radical conservatives have far from welcomed such an initiative. Indeed, on Feb. 13, Mohammad Reza Bahonar, one of the theoreticians of the Principlist movement, declared that there can be no reconciliation between the offender and the judge, noting that if the offender is regretting his past actions, then he must apologize, referring to the Reformists who sided with protesters during the unrest in the aftermath of the disputed 2009 presidential elections.

Indeed, Trump’s threats have in fact reshaped the political climate in Iran given that foreign policy has always played a great role in Iranian elections. The Rouhani government, an administration that has continuously been criticized by its Principlist opponents for not displaying sufficient strength against the West, especially the United States, is now standing up to Trump; Zarif, the administration’s chief negotiator, was among the first to react to Trump’s threats. As such, this new defiance on the part of the Rouhani administration has meant that the Principlists have lost one of their main weapons against the government. If anything, the same Principlists who have long been on the forefront of standing up to the West have been unable to forge a coherent reaction. Instead, they rather disparately railed against Trump’s threats, in effect only repeating what the Rouhani administration has already stated. In other words, while Trump’s threats are not taken seriously, the way different political factions decide to react to the threats is becoming a political football that could help determine the outcome of the May presidential vote.