Khamenei thanks Trump for 'revealing real face of US'

Iran’s supreme leader on Feb. 7 thanked President Donald Trump for revealing “the real face of the US.” Meanwhile, the Iranian foreign minister stated that the international community will not accept a renegotiation of the nuclear deal. 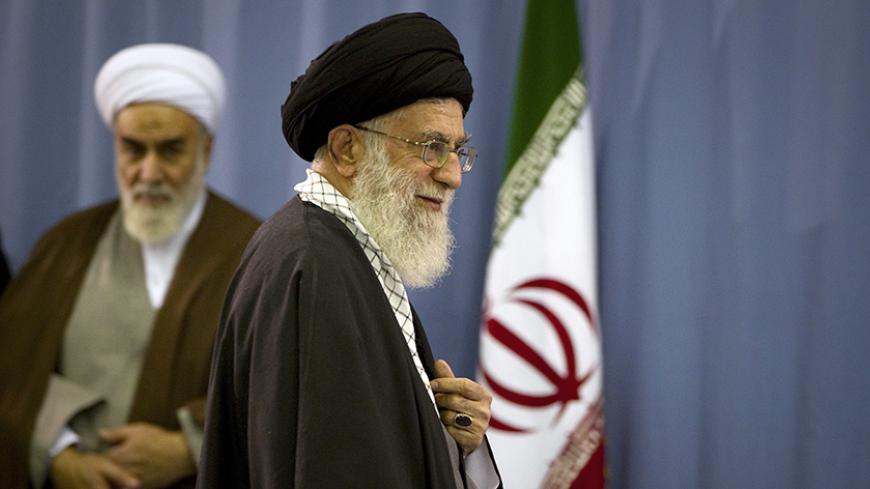 On Jan. 29, Iran test fired a ballistic missile. The launch raised eyebrows in Washington, with US National Security Adviser Michael Flynn and Trump stating in response that they have “officially put Iran on notice.” Moreover, in a series of tweets, Trump warned Tehran not to “play with fire.” Iran has, however, sought to brush off the warnings by holding military exercises on Feb. 4 in which different types of missiles and radar systems were tested.

On Feb. 7, for the first time, Khamenei responded to the Trump administration’s warnings. “Trump says fear me! No. The Iranian nation will respond to your comments with a demonstration on Feb. 10: They will show others what kind of stance the nation of Iran takes when threatened,” said Khamenei.

This year, the anniversary of the 1979 Islamic Revolution falls on Feb. 10. Iranians usually march on the street to mark the downfall of the shah.

Noting Trump’s tweet that “Iran doesn't appreciate how kind President Obama was to them,” Khamenei said, “The new US president says thank Obama! Why?! Should we thank him for Daesh [Islamic State], the ongoing wars in Iraq and Syria, or the blatant support for the 2009 sedition? He was the president who imposed ‘crippling’ sanctions on the Iranian nation; of course, he did not achieve what he desired. No enemy can ever cripple the Iranian nation."

Iran faced unprecedented unrest following the 2009 presidential election, which saw Mahmoud Ahmadinejad re-elected by a landslide. Khamenei believes that foreign powers, including the United States and Britain, were behind the unrest, calling it “sedition.”

The supreme leader, who was addressing commanders of the Islamic Republic of Iran air force, further in effect thanked Trump for making it easier for him to “reveal the real face of the United States.” Khamenei said, “What we have been saying, for over 30 years, about political, economic, moral and social corruption within the US ruling establishment, he [Trump] came out and exposed during the election campaigns and after the elections.”

He added, “Now, with everything he [Trump] is doing — handcuffing a child as young as 5 at an airport — he is showing the reality of American human rights."

After Trump signed an executive order on Jan. 27 to ban the entry of citizens of seven Muslim-majority countries — including Iran — a news story surfaced about the handcuffing of a 5-year-old boy at Dulles Airport, who was called a “security threat” by the White House.

Khamenei continued, “If we use wisdom and prudence along with trusting the Satan [the United States], the result will be a mirage. In any matter, including diplomacy and the country’s problems, it is true that trusting demons and the materialistic power, which oppose your essence, leads to a mirage.” It is noteworthy that during the nuclear talks with six world powers, which resulted in the July 2015 nuclear deal, Khamenei repeatedly stated that he was pessimistic about the outcome of the agreement and reiterated to Iranian negotiators that they shouldn’t trust the United States.

In other news, on Feb. 7, an extensive interview with Iranian Foreign Minister Mohammad Javad Zarif was published in the moderate Ettelaat newspaper.

Responding to a question about the destiny of the nuclear deal, or Joint Comprehensive Plan of Action (JCPOA), Zarif stated, “I think the Americans neither could get a better deal nor will get a better one.”

In this vein, he added, “I believe it is possible that Trump will try to renegotiate the JCPOA. It is clear that neither Iran nor the Europeans will accept the renegotiation. The international community will also not accept this.”

Mentioning Trump’s description of the nuclear deal as “the worst deal” in history, Zarif said, “We have difficult days ahead, though we haven’t had easy days during the past year [either]. We went to the negotiation table to get each one of our rights, and we will do the same again.”

Referring to the US government’s policies after the 9/11 attacks, Zarif warned, “If Mr. Trump tries to have the same radicalism, the Americans themselves will have to pay the ultimate price.”