Iran continues to provide financial and military support for Hamas amid a positive atmosphere that promises stronger ties and efforts to defuse the sectarian tension while bilateral meetings between the two are still being held outside Tehran, according to the movement’s representative in Iran. 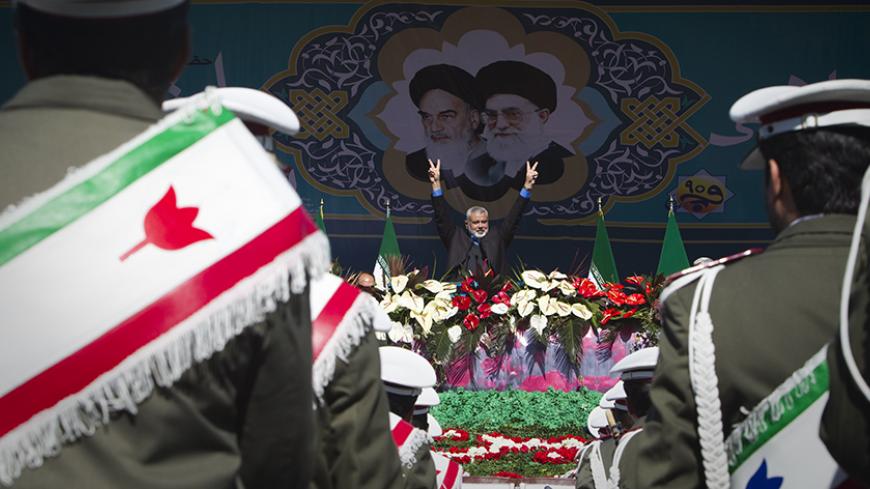 Hamas’ representative in Iran, Khaled al-Qaddumi, tells Al-Monitor that progress has recently been made toward further developing relations between his movement and Tehran, as the latter continues to provide financial and military support to Hamas. However, he denied that there have been demands by any Arab countries for Hamas to cut ties with Iran, and stressed that no mediation efforts have been attempted by Iran to reconcile Hamas with the Syrian regime.

In a phone interview from Tehran, Qaddumi said that for the past few years he has been involved in Hamas’ Islamic and international relations, including dealing with some Western and southwestern Asian countries he did not name, taking part in Hamas’ delegations to Asian, African and European countries.

Qaddumi, who has been the head of Hamas’ office in Tehran since 2011, said, “Hamas’ internal elections are expected to have a positive result on the party’s relations with Iran,” adding that meetings are regularly held between the two outside Iran, with Hamas maintaining contact with many Iranian official bodies such as the Islamic Revolutionary Guard Corps (IRGC), the Foreign Ministry and the office of the supreme leader.

Al-Monitor:  How would you summarize Hamas-Iran relations up until early 2017, after years of ups and downs and in the aftermath of the Arab revolutions starting in 2011?

Qaddumi:  The beginning of 2017 has ushered in a new era for Hamas-Iran relations that can be described as positive and forward-looking away from past complications, especially since Hamas does not interfere with the internal affairs of Islamic countries.

Today, Iran and Hamas wish to open a new page in order to live up to the serious challenges facing the Islamic world, mainly the Israeli occupation. The wise people in both Hamas and Iran realize the gravity of the upcoming period and the need to manage it with a fresh outlook guided by the Palestinian cause, support for the Palestinian people and standing up to the Israeli occupation.

Al-Monitor:  Does Iran continue to offer financial support to Hamas and arm its military wing? Can you shed some light on the figures in this regard?

Qaddumi:  I will not talk about numbers because I am neither capable nor supposed to disclose such confidential and sensitive information. However, in terms of financial and political support — and even military support — Iran’s offerings have not stopped.

That said, there are special circumstances underlying Hamas’ Arab and Muslim sponsors, which the party understands and respects. What we want is for Iran to keep Palestine as one of its priorities. Indeed, Iran’s support for the Palestinian cause is ongoing. But when it comes to the quantity and size, Hamas prefers to leave the figures for the sponsor to reveal. We are grateful to anyone who offers to help.

Al-Monitor:  A long period of time has passed since the last Hamas political leadership’s visit to Tehran in February 2016. Is there a visit planned any time soon?

Qaddumi:  Meetings between Hamas and Iran have not stopped. The location is not an issue. What is important is the content. Hamas extended its condolences over the death of former Iranian President [Ali Akbar] Hashemi Rafsanjani in [early] January. Meetings are held whenever the need arises.

Al-Monitor:  Some would argue that Iran is waiting for the upcoming Hamas elections and the election of a new leader other than Khaled Meshaal to end the dispute with Hamas. How accurate are these statements?

Qaddumi:  This is a matter to be decided by Hamas alone, not Iran or others. Our party is an institutional one and decisions are made after consultations. Hamas is a democratic organization and elected leaders reflect the will of its cadres. Elections are held every four years on both leadership and geographic levels. Any decision should represent the party as a whole.

Our relations with Iran are based on their ability to face Israel and support the resistance, as well as common interests. The wise in Hamas and Iran are aware of the upcoming challenge and the reality of the war with the Israeli occupation. Therefore, the issue of changing the party’s leadership or internal elections is irrelevant. Nevertheless, these elections will largely contribute to consolidating the principles of democracy and consultation within Hamas, and eventually reflect more positively on renewing the party’s relations with its Arab and Islamic entourage.

Al-Monitor:  How does Hamas perceive its future relationship with Iran amid the sectarian tension between Sunnis and Shiites in the region?

Qaddumi:  This tension is part of the many setbacks the region has been facing, and it impacts the overall relations between the stakeholders. However, Hamas — in its relationship with Iran — relies on what is best for the struggle with the Israeli occupation. We are keen to mitigate this sectarian tension without biased interference. This is why Hamas-Iran relations help scale down and deal with the sectarian tension. Hamas would play a positive role in bridging the gap within the Islamic world.

Al-Monitor:  Is it true that Iran is leading mediation efforts to achieve reconciliation between Hamas and the Syrian regime?

Qaddumi:  This issue has not been raised thus far.

Al-Monitor:  Some Iranian voices have been raised in criticism of Hamas, laying out terms for restoring relations with the party because the latter has yet to make a decision on whether or not it should back Iran’s regional policy, preferring to remain neutral. Does this criticism have any effect?

Qaddumi:  No country can impose terms on Hamas despite the region’s political polarization. I’m not talking only about Iran, but the whole region. Such polarization aims to sway Hamas into taking this side or the other. However, this pressure does not affect us since we are keen to have balanced relations with all regional stakeholders.

Al-Monitor:  Does Hamas maintain a relationship with the Iranian state or is it only limited to certain official bodies such as the IRGC and the office of the supreme leader?

Qaddumi:  There are established channels between Hamas and Iran, although we are open to all the Iranian people and decision-makers. The message we convey is intended for Iran — as a people and leadership. Official channels such as the IRGC, the Foreign Ministry and the office of the supreme leader have always been there to facilitate the process. This is why Hamas holds deep respect for official channels and all levels of decision-making in Iran.

Al-Monitor:  Does Hamas receive demands from other countries in the region to permanently cut its ties with Iran?

Qaddumi:  Hamas’ environment is severely polarized, but none of the Arab countries demanded that we cut our ties with a certain country or another, such as Iran. This issue depends on Hamas’ organizational decisions that define its relationship with each country as well the party’s contribution to the resistance of the Palestinian people. The way Hamas manages its relations with every stakeholder — be it Iran or others — dictates that we maintain balanced relations with everyone.

Al-Monitor:  What does Hamas think of Iran’s support for some armed groups in the Gaza Strip such as Harakat al-Sabireen [Movement for Supporting Palestine]?