Is Egypt moving toward rapprochement with Assad government?

A number of unofficial visits to Syria by Egyptian groups have raised speculation that Cairo is conducting backdoor diplomacy with the Syrian regime. 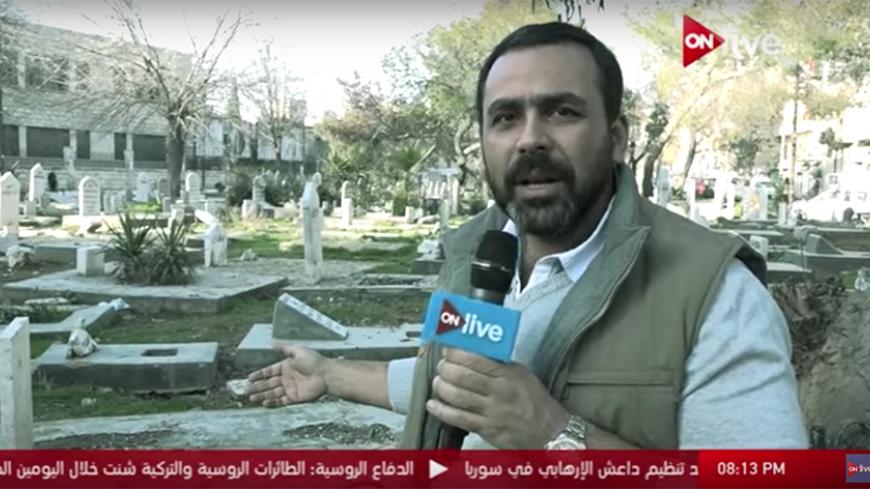 The host of the Egyptian TV show Bitawqit al-Qahira, Youssef al-Hosiny, apeaks during his recent visit to the Syrian city of Aleppo. Posted Jan. 24, 2017. - YouTube/ON Live

CAIRO — Two non-official visits by Egyptians to war-torn Syria within less than two weeks have sparked speculation that a rapprochement between Cairo and Damascus might be in the works. An Egyptian talk show host and a production crew landed Jan. 7 in Aleppo, while on Jan. 19 members of the Egyptian Engineers Syndicate, led by syndicate head Tareq al-Nabarawy, arrived in Damascus at the invitation of Nabarawy's counterpart, Ghiyath al-Qutaini.

The media visit was announced when Youssef al-Hosiny, host of Bitawqit al-Qahira (Cairo Time) on the satellite station ONTV, tweeted, “I am on my way to the airport, flying to Syria, the eagle of the East, to learn and report what happened to the free Aleppo, and Damascus, the Pearl. I’ll be back, God willing, to Cairo, with a different and hard-hitting episode.”

Ibrahim Gad, a member of the production team, told the Huffington Post’s Arabic edition Jan. 10 that only the show's content production team accompanied Hosiny and that the trip had been arranged in coordination with Egyptian authorities. The team met with Egypt’s charge d’affaires in Syria, Mohamed Tharwat.

A source at ONTV told Al-Monitor that the purpose of the visit was to record the destruction of Aleppo and the prevailing atmosphere. The source said the timing of the visit — after government forces and their allies took full control of Aleppo — was merely coincidental, not arranged by the TV station or Hosiny to tout President Bashar al-Assad's victory.

A report based on the trip aired Jan. 24 on ONTV, eliciting criticism on a number of websites opposed to Assad, such as Almodon.com. Hosiny opens the program standing in a graveyard where victims of the Aleppo war are buried. He says, “We ask you to pray that God grant a peaceful rest to those martyrs who fell victim to terrorism and armed groups that unfortunately controlled the city for a while.”

In another segment, he says, “The martyrs died in defense of their country, territory and honor. Unfortunately, they were killed at the hands of terrorism and armed groups that held the Syrian city of Aleppo for a while before being freed.” This, some anti-Assad websites argued, represents an attempt to brand all the armed opposition factions as terrorists and apostates and is an example of Hosiny deliberately turning a blind eye to the roles of Syrian fighters, Russian bombing and Iranian militias in destroying Aleppo.

Of note, Hosiny was not the only media figure who traveled Jan. 7 from Egypt to Syria. Moustafa El Saeed, a journalist with the semi-official Al-Ahram, wrote Jan. 7 on his Facebook page, “At the Cairo airport. Flying to Damascus, then to eastern and western Aleppo, and Tartus.”

As for the engineers' visit, Nabarawy announced Jan. 19 that he had brought with him a draft agreement on cooperation to present to Qutaini and for discussion with Syrian engineers on activating it. “The most important terms of the agreement is that each syndicate operates as an umbrella protecting the other syndicate’s members working in its country,” Nabarawy said in a statement. “The cooperation protocol suggests cooperation to exchange expertise and take advantage of the syndicate members’ expertise in the implementation of national development projects.”

On Jan. 24, a number of the Egyptian syndicate’s general assembly and popular council members criticized the Syria visit to the Youm7 newspaper; they also complained about a Jan. 21 meeting with Syrian Prime Minister Imad Khamis. They argued that the delegation had gone beyond the syndicate’s role as a labor union by venturing into the political sphere and demanded that an internal investigation be opened into the matter.

In a statement to Youm7, they said, “As we previously objected to any political interference in the syndicate’s affairs and to the [Muslim] Brotherhood board delegation’s visit to Gaza [in 2012 and 2013, when Brotherhood members controlled the syndicate’s board], we oppose the visit to Syria, which is political, and we have nothing to do with politics. These principles have not changed.”

Commenting on the criticism, Nabarawy told Al-Monitor, “It was a technical, vocational and syndicate visit that has nothing to do with politics. It showed Egyptian engineers’ willingness to take part in the reconstruction of Syria to meet the Syrian people’s needs. This matter is one of honor for any Egyptian engineer, devoid of any political considerations. We signed a protocol for cooperation with Syria, similar to the protocol previously signed with Iraq and that did not ignite criticism back then.”

On Nov. 15, the US House of Representatives passed a bill imposing sanctions on any countries or companies providing the Syrian government financial support or conducting business with the Assad regime, which has been accused of committing war crimes and crimes against humanity. Some observers therefore interpreted the media and engineers' visits as backdoor channels to avoid being sanctioned while working to arrive at an eventual Cairo-Damascus rapprochement.

Ashraf Abdel-Aziz, an Arab affairs researcher at the Regional Center for Strategic Studies, dismissed the idea of the Egyptian government using unofficial parties to broker a rapprochement with the Syrian regime. He told Al-Monitor, “This is because Egypt does not support the Assad regime, but does support stability in Syria, in order to preserve the region’s security. Also, the US bill distinguishes between support for the Syrian regime and support for the Syrian people through humanitarian assistance."

Amid speculation about the true nature of the recent visit, the possibility remains that they could indeed have been nonpolitical endeavors as billed.