How far is Egypt willing to go to have strong grip on media?

Egypt's former armed forces spokesman is now the head of a media outlet, which is sparking much controversy and raising questions about the Egyptian state's tight grip on the media. 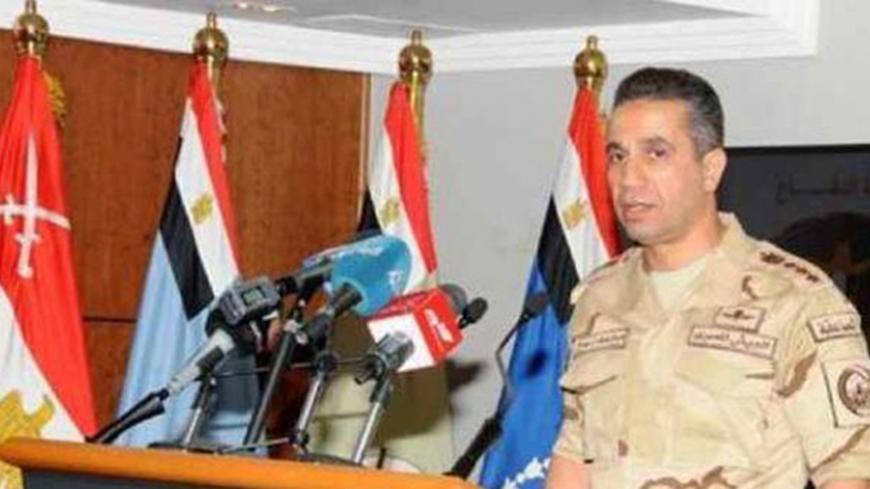 CAIRO — Brig. Gen. Mohamed Samir, a former spokesman for the Egyptian armed forces, assumed the position of director general at Al-Aseema Television Network Jan. 15, which sparked much controversy in the Egyptian street, raising questions as to the future of Egyptian media. Does this step mean that the executive branch will now have full control of the media?

The TV channel’s programs and broadcasting were suspended due to the change of management. The channel has yet to reopen with new programs.

Sherry Media Advertising Company issued a statement Jan. 15, saying that it has been officially handed the management of Al-Aseema TV and appointed Samir as its director general. The company stressed that it is keen on providing professional media content, contributing to raising awareness in the community on various issues.

Sherry Media Advertising Company, which was established by businessman Ihab Talaat on Dec. 2, 2016, specializes in advertising.

Talaat is seen as a media expert. He is also accused of trying to monopolize the media in Egypt. Before starting his own company, he sponsored a large number of TV stations and newspapers through Pro-Media Company, including the Tahrir Channel, ONTV, al-Shorouk newspaper and Al-Masriy Al-Youm daily.

Talaat was chosen as the chairman of the board of directors of Hayat Media Services Co. on Feb. 6, which is the exclusive advertising agent for all Hayat TV network channels, Egypt’s biggest network.

Egyptians opposing the appointment of Samir believe it is a miserable attempt by authorities to nationalize the media, unify its message and block any opposing voices against the government.

Others believe that owning and running media outlets should not be limited to certain parties, whether military men or politicians, and that it is the right of any individual to run media institutions as long as this is done according to professional rules and standards. They argue that Samir left the army and is now an ordinary civilian like any other Egyptian citizen.

On the Facebook page of the spokesman for the armed forces, a statement was posted on Dec. 31, 2016, that said, “As part of the military bulletin for promotion and reassignments of armed forces officers, scheduled in the months of January and July of every year, Gen. Sedki Subhi, the general commander of the armed forces and minister of defense, approved the appointment of Chief of Staff Officer Col. Tamer Mohamed Mahmoud al-Rifai as the official spokesman for the armed forces, effective as of Jan. 1, in succession to Brig. Gen. Mohamed Samir, whose services will end on Jan. 1, 2017.”

This Facebook post came at the same time as the announcement that Talaat would be managing Al-Aseema channels 1 and 2, after a final agreement with member of parliament Saeid Hasaseen, the owner of both TV channels. The decision was effective on Dec. 28, 2016.

Samir graduated from the Egyptian Military Academy on July 1, 1988, and joined the infantry. He received several military training programs and obtained a bachelor's degree in business from Ain Shams University.

During his tenure as spokesman for the armed forces, Samir built good relations with people in charge of newspapers and media outlets in addition to his close relations with the country’s businessmen.

Journalist Magdi Shanadi, the editor-in-chief of al-Mashhad newspaper, told Al-Monitor, “Appointing Samir as head of Al-Aseema TV channel means that the regime is no longer running media outlets through its close circles or affiliated persons, but it has now direct control over them.”

Shanadi added, “The regime thinks of the media as a dangerous tool and that it is necessary to highlight some issues in the media, while hiding others, without any regard to journalistic and media standards and professionalism. This is no secret to anyone. President Abdel Fattah al-Sisi had previously expressed his dissatisfaction with the media outlets performance, saying that he would like to have the same media support as Gamal Abdel Nasser."

In his speech during the new Suez Canal inauguration ceremony on Aug. 5, 2014, Sisi said, “Gamal Abdel Nasser was lucky as he had the support of the media. The Egyptian media has a great responsibility and has to side with the people.”

For his part, Dandarawi al-Hawari, the executive editor of Youm7 newspaper, told Al-Monitor, “Samir has left the army of his own free will and retired. Now he is a civilian, enjoying full civil and political rights like any other Egyptian citizen and has the right to assume any civil position.”

He said, “Businessman Talaat, owner of the TV station, appointed Samir in his position. Talaat is known for his interest and investment in the media and has a long history in the media domain. Therefore, any talk about Samir being appointed by pulling strings by the army is unfounded."

Commenting on whether Samir has adequate experience in running a media outlet, Hawari said, “As a military man, Samir did not have any civil expertise. However, he has been dealing with different media outlets and newspapers for 2½ years, serving as a spokesman for the armed forces. This allowed him to gain experience in this domain, not to mention that he built good relations with people running newspapers and TV channels.”

Huwaida Mustafa, the dean of the Higher International Institute for Media at El Shorouk Academy, told Al-Monitor, “The media plays a pivotal and influential role in public opinion. That is why businessmen and institutions are keen on owning shares in media outlets, which is normal and there is nothing wrong in it. However, media institutions have to be clear and open about their political inclinations. This is the case of all media institutions around the world.”

Commenting on talks about the state’s attempt to control the media, Mustafa said, “We have tens of TV channels and radio stations affiliated with the state, but they have little influence on the ground. It is only normal for the state to try to relay its messages to the public opinion. This does not mean that Brig. Gen. Samir is a tool in the hands of the state, and there is no proof of this anyway. He is now a civilian and has the right according to the constitution to take up a senior civil position in the state, whether by owning or running media outlets.”