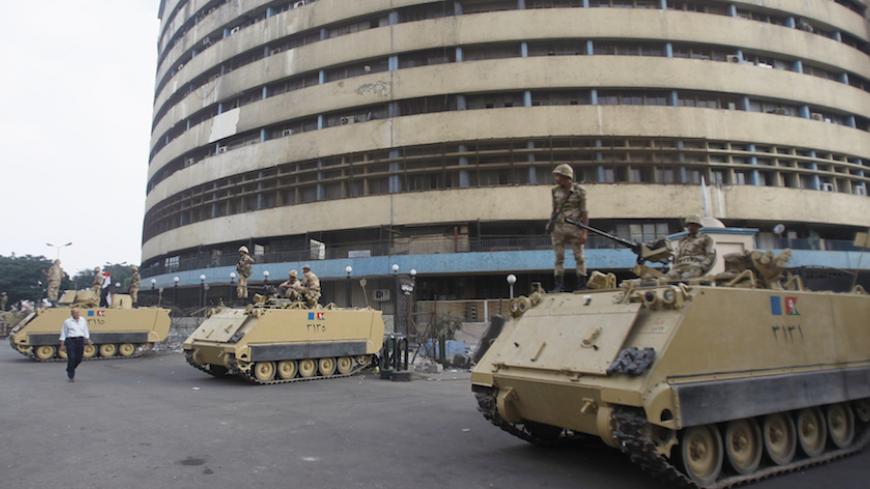 As a result, several popular shows have been cut short, while Modern Sports, Mehwar 2, Mehwar Drama and several religious channels have been shut down. Producers and hosts have been dismissed and salaries slashed. Private newspapers suffered the same fate, while the governmental sector represented by the Egyptian Radio and Television Union (ERTU) incurred losses estimated at 3.6 billion Egyptian pounds (around $500 million) for the 2013-14 fiscal year. Its debts amounted to around 20 billion Egyptian pounds (around $3 billion). Several national press institutions are in financial crisis, with accumulating debt and continuous losses.

A drop in advertising and increasing salaries and debt seem to be at the root of the problem.

There have been calls to privatize the media in Egypt, mainly by businessman Naguib Sawiris who, in an Al-Akhbar article published Dec. 20, 2014, made the case for auctioning off several TV stations owned by ERTU and using the revenue to pay off the media sector’s debts and mitigate losses. In the same article, Sawiris criticized state-run TV channels and described them as government mouthpieces that now only exist in totalitarian states.

He demanded 7 billion Egyptian pounds (around $1 billion) — about two years' worth of salaries — to be divided among the stations' staff as severance. He also called for giving each worker a bonus commensurate with their position that they can invest in a personal project.

“Several channels do not aim to present good media content, but have only emerged to protect businessmen and their interests,” he said, adding that the current state of Egyptian media stems from the unprofessional use of political money.

Ultimately, viewers have lost trust in the content presented by these channels. Abu Kab warned that the problems of private channels might worsen in the near future, and that they might be dismissed altogether from the media scene after the end of the 2015 parliamentary elections if their owners do not win the parliamentary representation that suits them. There are three main media groups affiliated with businessmen who also happen to be politicians: Al-Hayat, owned by El-Sayed el-Badawi, president of the Wafd Party; ONTV, owned by Sawiris, who is the founder and indirect head of the Free Egyptians Party; and Mohammed Abul-Enein, owner of Sada El Balad and a former member of Mubarak’s regime supported by many figures of the disbanded National Party of Egypt.

Abu Kab said that it is not right for media institutions to become government mouthpieces.

Abu Kab rejected the selling of the ERTU building or national newspapers and the mass layoff of staff.

“Many developed countries do not have national media, but these countries do not have the illiteracy rates and levels of ignorance prevalent in Egypt. If the state sells the [ERTU] building, it would be granting businessmen the right to unconditional monopolization that would allow them to mold public opinion in accordance with their interests. The [media] institutions can be reformed by setting rules to choose employees based on competence, prohibiting huge financial allocations for prominent leaders and investing these allocations in developing the institutions' technologies, in addition to remitting old accumulated debt that hinders their progress. Moreover, national institutions should know how to use the available resources — something the private sector excels at — instead of practicing bureaucracy, and channels presenting similar content should be merged, like the specialized Nile channels,” he said.

Retired Gen. Hossam Sweilam launched a fierce attack against those who call for selling the national media institutions and described these attempts as “madness.” He said that supporters of the privatization of national media “have gone insane in their assessment of the importance of national media based on material losses and gains. They are overlooking the priceless cultural and enlightening role of these institutions. Would we, for instance, cancel public education for lack of profit?”

Sweilam said that national media institutions are more stable than private ones. Moreover, according to Sweilam, the state did not reduce the salaries of employees or shut down the channels or newspapers, but is rather supporting government-owned media because these outlets are a vital part of modern states. He added that the people calling for the sale of national media institutions ignore their role in fourth-generation warfare that relies on foreign intervention to push the state to fail without needing military intervention.

“These wars are largely psychological and study the points of weakness of the enemy states. They also rely on the media to exaggerate these weaknesses, thus sparking the fury of citizens in those states and their rejection of the ruling regimes. As a result, revolutions break out, and they sometimes serve the interests of major powers that could not care less about the demands of the revolting countries,” Sweilam told Al-Monitor.

The true crisis of the Egyptian media does not seem to be exclusively financial, but includes its quality. The media should prioritize professionalism over personal interests to advocate the modern model that Egyptians dream of.