Egypt's new Young Guide program educates and trains children to guide tours at several archaeological locations, leaving them with an enhanced sense of respect, appreciation and responsibility for their nation's treasures. 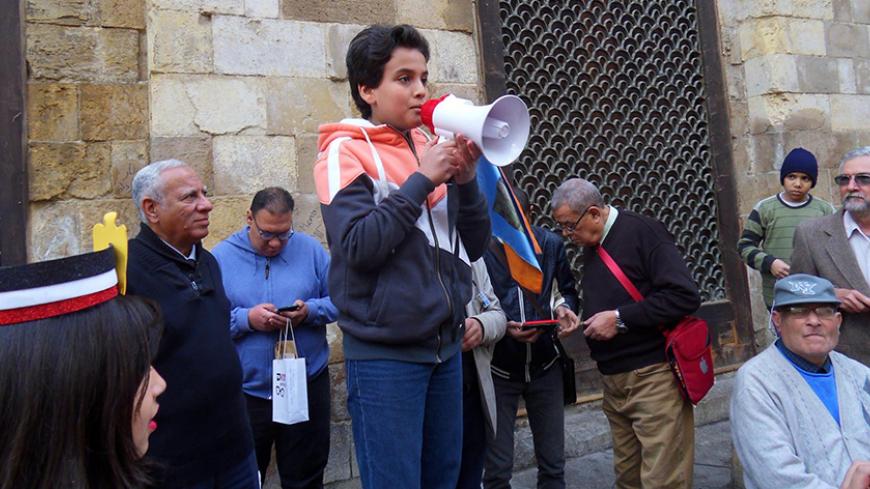 One of the young participants in the Young Guide program conducts a tour, in Egypt, Feb. 4, 2017. - Facebook/Ehab Abd El Galeel

“Early Start, Grow Smart,” goes the motto of “Al-Murshid al-Saghir” (Arabic for "Young Guide") program that educates children about the value of Egypt’s archaeological and historical wealth and trains them to guide tours for museum visitors. The program, launched by the Egyptian Ministry of Antiquities at the end of January, is now running at a number of archaeological sites under the direction of the Department of Archaeological Awareness in Cairo’s Gamaliya district.

The general director of the Cultural Development and Museum Education Department at the Ministry of Antiquities, Rasha Kamal, told Al-Monitor, “The Young Guide program was inspired by the Children’s Museum at the Egyptian Museum launched in 2002. The museum educates children about their country’s archaeological history by organizing plays and artistic activities for children about Egypt’s history and archaeological wealth.”

She said, “The idea was revived by the Departments of Archaeological Awareness [and] the Young Guide program has begun operating in several archaeological sites such as Alexandria’s Marina town, the Egyptian Museum in Cairo, Muizz Street and Khedivial Cairo.”

There are 30 9-year-olds enrolled in the program.

“Children wishing to participate are required to register through the program’s Facebook page or at the Archaeological Awareness Departments in Egyptian museums,” she continued. “The ministry is working to consolidate the program between the three sectors and implement it at all the archaeological sites so that the largest number possible of children benefit from it, understand the value of antiquities and preserve them.”

She explained, “The Young Guide program was able to train a group of children who are now guiding some visitors. We are also trying to teach a number of children to carry out guided tours in foreign languages.”

Asked how the children are trained, Kamal said, “The program relies on volunteers from antiquities faculties and others from the ministry who undergo training. In turn, they train the children and guide them on giving archaeological tours. Information must be delivered in an exciting and simple way so that children do not get bored by the end of the program. Once the program ends, child participants receive a gift and extensive follow-up.

“The department also launched a number of initiatives aimed at children, such as the Archaeological Passport program, which gives children a special passport. It lists a number of archaeological sites, and each time a child visits one, the Department of Archaeological Awareness stamps the document. When all the listed archaeological sites have been visited, the child is rewarded with a certificate of appreciation. There’s also a proposal to introduce a puppet show to all museums to educate children about the history of antiquities in a simple and exciting way. The puppet will be designed according the museum’s history and the historical period it represents.”

Asked the program goals, Kamal said, “The Young Guide program aims to counter the phenomenon of antiquities theft and introduce the children to the value and history of antiquities. The child will then share what he or she learned with his or her family and entourage and show interest in preserving antiquities. Furthermore, thanks to the program, the children now feel proud of what they learned about the importance of their culture and history.”

The head of Gamaliya’s Department of Archaeological Awareness, Mohammad Khalil, told Al-Monitor, “The program’s concept was applied a few months ago at Cairo’s Muizz Street, although it was scheduled for last year, as security approvals hindered the process. Three primary schools participated in the program and we targeted the most difficult age — that is, 9-year-old children — to inculcate the value of antiquities in them.”

Khalil added, “The idea of the program consists in training the children on tour guiding and explaining the history of their antiquities. Instead of the actual tour guide, children take over the task of guiding others. It is a weeklong, three-hour per day program in which 32 children have taken part.

“No budget was allocated for the Young Guide program. We provided funding through the participation of private schools that sent their students and bore some of the program’s financial costs. The Young Guide program will continue, covering more age groups up until university level. We will be focusing on high school students to encourage them to join antiquities faculties by introducing them to the value of antiquities and showing them how exciting it is to teach other people about it.

“Thanks to the program, many child participants now dream of becoming tour guides.”

Its organizers hope the Young Guide program's continuation will produce a generation that is aware of the value of antiquities and capable of preserving them. They hope this group will spread archaeological awareness in society and help counter antiquities theft and smuggling.