This year's "Working Journalists Day" is a bleak holiday indeed in Turkey, the biggest jailer of journalists in the world. 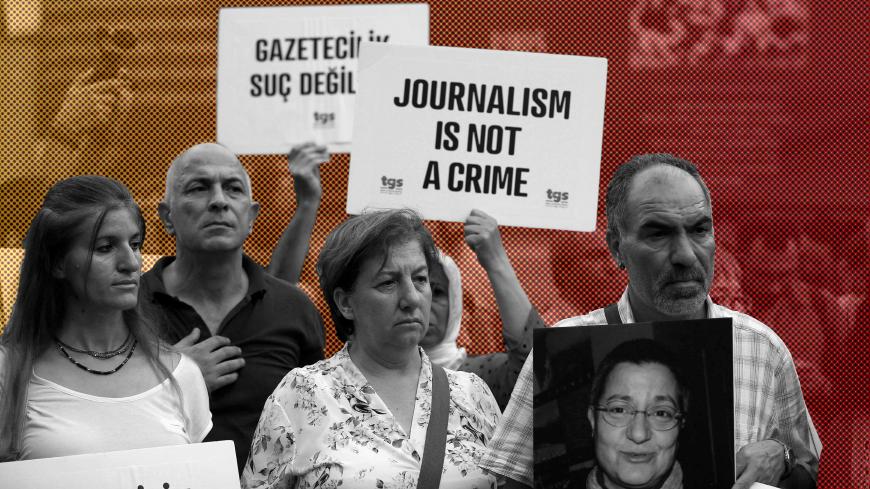 “Working Journalists Day,” celebrated Jan. 10 in Turkey, is meant to honor the rights of reporters and other media workers in the country. While the press has never been really free in Turkey, rarely have conditions for journalists been as bleak as they are today.

With over 100 journalists currently behind bars, Turkey is the biggest jailer of journalists in the world, outranking China and Egypt, according to Reporters Sans Frontieres.

Media bosses buckling under government pressure continue to fire critical reporters and columnists — around 10,000 Turkish journalists are unemployed — leaving an ever shrinking number of “working journalists” to celebrate today.

“For two months our one and only son has been pining for his father’s face,” tweeted Nazire Kalkan Gursel, the wife of Kadri Gursel, a fellow Al-Monitor columnist and one of Turkey’s best-respected journalists. He is among scores of journalists in pretrial detention for articles or tweets deemed threatening to the Turkish state.

Gursel’s “crime” was to have “subliminally” encouraged the failed July 15 coup in a column for the leftist Cumhuriyet in which he mentioned Ali Bouazizi, the Tunisian street vendor who set himself on fire and is credited for triggering the Arab Spring.

Veteran Syrian journalist Husni Mahalli was jailed in December, supposedly for insulting Turkey’s leaders in a series of tweets. But in truth, he is being punished for criticizing the government’s long-running campaign to overthrow Syrian President Bashar al-Assad, even though the policy has been reversed and Deputy Prime Minister Numan Kurtulmus publicly called it “a mistake.”

Mahalli, 67, has serious health problems, but his appeals to be freed pending trial have fallen on deaf ears.

Pressure on journalists has intensified since the botched coup. Over 100 newspapers and other media outlets have been shuttered, many for alleged links with Fethullah Gulen, the Pennsylvania-based Muslim cleric who is accused of masterminding the coup.

Foreign journalists are also feeling the heat. On Dec. 27, Dion Niessenbaum, a correspondent for The Wall Street Journal, was carted off by plainclothes police from his Istanbul home and locked up in a cell that had no windows or a toilet for 2½ days. Niessenbaum was denied access to his family, editors or lawyer, and his captors declined to explain why. Erdogan’s office was apparently infuriated by a still image he retweeted from a video released by the Islamic State of two captured Turkish soldiers being burned to death. The government declared it fake and has effectively banned all discussion of the video.

Rights groups say Turks who hold dual nationality and work for foreign media outlets are especially vulnerable because their organizations run stories their Turkish colleagues are afraid to touch. Parachutists who wade in with their hobnail boots and dash off critical pieces with little knowledge of the political environment only make things worse. The New York Times recently announced that it was withholding the bylines of its local staff.

The year 2017 could spell even more trouble for journalists as the country’s President Recep Tayyip Erdogan pushes to boost his already considerable executive powers amid a weakening economy and mounting terror attacks from IS and Kurdish militants alike.

To be sure, his message to journalists to mark this day had an ominous ring to it. “I believe members of our press can make an important contribution to the fight against terrorism, the strengthening of democracy and of our [national] unity during these sensitive times,” he said.