Turkey: Winner or loser in Syria?

There is unfortunately every indicator that terror will continue to hit Turkey in force during 2017. 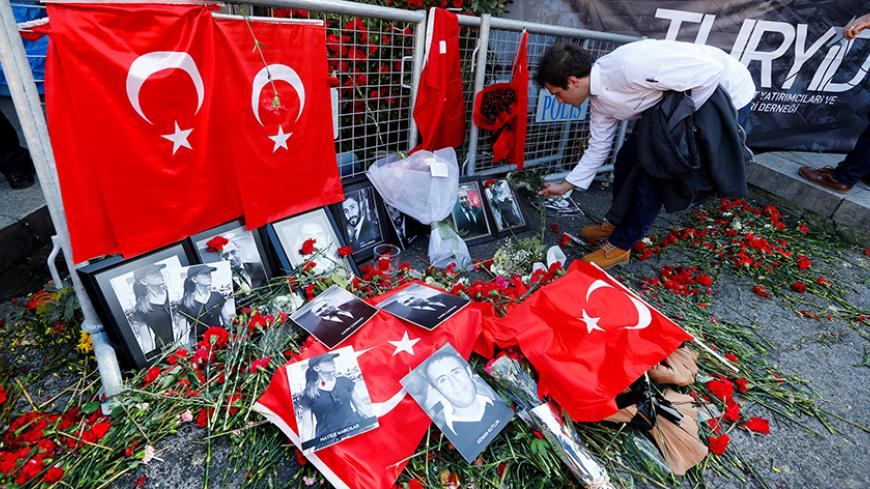 A man places flowers at the entrance of the Reina nightclub, which was attacked in the early hours of Jan. 1 by a gunman in Istanbul, Jan. 3, 2017. - REUTERS/Murad Sezer

“The country is at a critical juncture — or perhaps beyond it. Because of the sad loss of democracy within its borders and the repeated mistakes of [Turkey's] AKP [Justice and Development Party] government in Syria, because of the turbulence of the Middle East and the changing world scene, our big cities have become a new front for terrorists. Once we thought Turkey would be a shining role model for the Muslim world; now we are worried that our country may in fact be following some of its worst examples.”

These are the concluding remarks of renowned Turkish novelist Elif Shafak in a Jan. 3 piece in the British daily The Guardian. Within the first hour of the first day of 2017, terror had struck once again in Istanbul, taking 39 lives, heralding another gloomy year ahead for the Turks and leading to Shafak’s anguished lines.

Her piece is just one of many linking the latest escalation of terror in Turkey to the Syrian situation; indeed, this has been a recurring theme in this Al-Monitor column. In the space of a month, Turkey (Istanbul twice) has been rocked by three big terror attacks that have led many people to see a correlation between President Recep Tayyip Erdogan’s policies in Syria and their blowback in bloody terror attacks at home.

Veteran Middle East expert Patrick Cockburn writes in The Independent that what makes “terrorism” in Turkey different from that in Europe and the Middle East is not the number of dead, but the diversity of those carrying out terror attacks.

He wrote, "The killing by an Islamic State [IS] gunman of 39 civilians in a nightclub in Istanbul is the latest massacre in Turkey, where such slaughter is now happening every few weeks. The perpetrators may differ, but the cumulative effect of these atrocities is to persuade Turks that they live in an increasingly frightening and unstable country. It is also clear that the Turkish government does not know what to do to stop the attacks."

He sees, as I do: “The government in Ankara is making the usual noises about tracking these different groups 'to their lairs.' But this will be easier said than done. Both [IS] and the PKK [the Kurdistan Workers Party] have established powerful de facto states in Syria and Iraq, something that could only have happened because of Erdogan’s ill-conceived involvement in the Syrian civil war after 2011.”

It is almost an established fact that IS once used Turkey as a passage route, transfer point and sanctuary. Thanks to the benevolent attitude of Erdogan’s rule, the Salafi creed spread in Turkey; over Turkey’s fertile soil, scores — if not hundreds — of IS cells flourished. Now, IS denounces Turkey as an enemy and the Erdogan government as “apostate.” Because of purges in Turkey’s security apparatus in the wake of the failed July coup, a huge intelligence vacuum was created, one that is almost impossible to fill within a decade. This, in turn, has encouraged actors from the multiple fronts Erdogan engaged in an unwinnable war in Syria to retaliate with terror and impunity on Turkish soil.

There is unfortunately every indicator that terror will be hitting Turkey in force during 2017, and there does not seem to be much that the current government can do to prevent it.

“In times of crisis when violence stalks the land, people cry out for a strongman to get a grip on the problem. But what if terrorism spawns chaos in a country already under the thumb of a strong man?” Mark Almond asked in the Daily Telegraph. For him, “Turkey is in a uniquely awful position. It now has the strongest president since the military coup in 1980, possibly since Ataturk himself ninety years ago.”

He continued, “But President Erdogan’s extraordinary skill in consolidating his power has not been matched by an ability to solve the country’s problems. Bizarrely, Erdogan is a control freak who is not really on top of the threats facing his society. If anything his capricious style of government has bred them. By arming and encouraging radical jihadis to fight Assad’s regime in Syria, Erdogan ignored the risks of blowback.”

The picture of Turkey displayed in the first days of 2017 betrays the myopic evaluations of those who inadvertently presented Turkey next to Russia as among the winners in Syria. On the contrary, because of the developments related to Syria or its wrongheaded policies there, Turkey is destabilized. What is more alarming is that its instability could become permanent.

Turkey is the co-initiator, with Russia, of the fragile cease-fire in Syria; Russia is the main protagonist for the upcoming Syria peace conference in Astana, Kazakhstan, on Jan. 23.

However, Turkey's posture has been achieved only by forfeiting all the tenets of its Syrian policy since 2011.

Syria expert Emile Hokayem, in a Dec. 30 New York Times op-ed piece titled “How Syria defeated the Sunni Powers,” wrote, “Of the three Sunni powers, Turkey has the deepest involvement. … Since President Recep Tayyip Erdogan has lost favor with Washington and Europe over his domestic crackdown and foreign adventures, his fortunes are now tied to Russian good will. Moscow is exploiting Turkey’s weakness.”

The Russian goodwill only materialized in return for Turkey’s acceptance — and even its assistance — in the fall of Aleppo. Turkey, in order to ride the Russian bandwagon, distanced itself from the armed opposition groups that had depended on Turkish support since 2011, the year the Syrian uprising started. The draft copy of the Russian-Turkish agreement says that “the Turkish government guarantees the commitment of the opposition in all the areas that the opposition controls to the cease-fire, including any type of shelling.”

Those elements of the Syrian opposition that relied on Erdogan’s Turkey are now at its mercy, as Erdogan’s Syria policy, which has narrowed down to one of preventing Kurds from having any gains, is at Russia’s mercy.

Remembering how and from where Turkey’s Syria policy began and seeing the point it is at now, it would not be imprudent to say that Turkey is among the biggest losers in Syria.

The most perilous outcome might be that because of Syria, Turkey could also become the loser in its own country.