A Greek court’s decision to deny Turkey’s request for the extradition of suspected Gulenist officers who had fled to Greece after the failed coup, coupled with new tensions on the Aegean Sea, could reignite old disputes between Ankara and Athens. 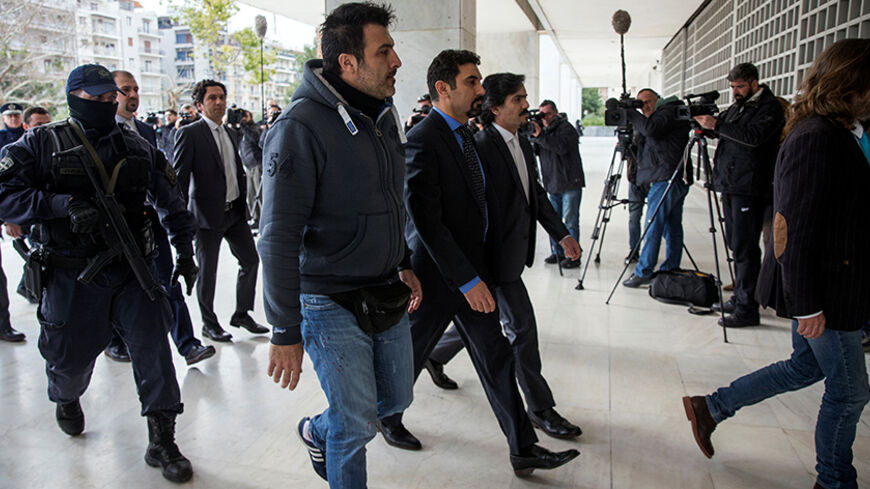 Eight Turkish soldiers who fled to Greece in a helicopter and requested political asylum after a failed military coup are escorted by police officers as they arrive at the Supreme Court in Athens, Jan. 26, 2017. - REUTERS/Alkis Konstantinidis

Turkish Chief of General Staff Hulusi Akar, the country’s highest-ranking military officer, visited the disputed Kardak islands in the Aegean Sea Jan. 29. Akar and the commanders of the Turkish army, navy and army forces visited the twin islands (known as Imia in Greek) on the anniversary of a crisis between Turkey and Greece that brought the two countries to the brink of war in 1996.

Both pro-government and opposition media outlets in Turkey interpreted the generals’ visit as a response to a Greek court’s decision to not extradite military officers who had fled the country as suspects in the July coup attempt and who are also suspected of being followers of the Pennsylvania-based Turkish preacher Fethullah Gulen. The hard-line secularist and vehemently anti-government Sozcu described the visit as a “Threat to Greece for not handing over FETO-ists,” and the pro-government Star also used the word “threat” (gozdagi) on its front page and connected Akar’s visit to the Greek ruling. The Turkish government and many of those who dislike Gulen refer to him and his network as “FETO,” or the Fethullah Gulen Terror Organization, accusing them of masterminding the failed putsch.

As this article went to publication, Turkey’s semiofficial Anadolu Agency reported that the Greek and Turkish coast guards were patrolling the waters around Kardak.

The Greek court decision and Turkish generals’ move risk opening old wounds between Greece and Turkey. While the two countries had experienced friendly relations from the 1930s until both joined the US-led North Atlantic Treaty Organization in 1952, their relations turned sour over the Cyprus question and the status of disputed islands on the Aegean Sea. Several times from the early 1960s until the late 20th century, the two neighbors and nominal allies came close to a shooting war.

But with the earthquakes that hit central Greece and northwest Turkey in the summer of 1999, Greeks and Turks began to see each other as less of a threat and more like partners. Since the turn of the 21st century, politicians in both countries have refrained from stoking xenophobia and nationalist sentiments for domestic political gains. By the 2010s, relations had so improved that some Turkish leaders debated whether Ankara should contribute to the European Union and International Monetary Fund-sponsored bailout package for Greece.

The renewal of old disputes with Greece could bring additional problems to Turkey — especially with the EU. Athens is an EU member, while Ankara is not. Relations between the European club and the Turkish government are already tense because of the refugee crisis, the EU’s refusal to fulfill its promise to liberalize its visa requirements for Turkish citizens (partly because of Ankara’s refusal to amend its anti-terror laws) and the overall deterioration of democratic standards and rule of law in Turkey.

As Al-Monitor’s Semih Idiz pointed out in November, Turkish President Recep Tayyip Erdogan likes to give the appearance of abandoning his country’s EU aspirations and seeking acceptance in the Shanghai Cooperation Organization. According to the Turkish daily Hurriyet, EU Commission spokesperson Margaritis Schinas said at a press conference Jan. 30, “An important criterion for our pre-accession partners is good neighborly relations.”

Akar’s Kardak stop had its domestic detractors, too. While a senior parliamentarian from the main opposition Republican People’s Party called the visit “touristic,” Col. Ali Turksen, a retired Turkish naval special forces commando who had played a key role in the 1996 crisis, belittled Akar’s effort and claimed that Greek patrol boats blocked his entry to the Kardak islands. In a series of tweets, Turksen suggested the episode weakened the Turkish military’s image, which he blamed on Akar and Erdogan. Gulsen went on to say he was absolutely opposed to the passage of the constitutional amendments that would give Erdogan his dream of an “imperial presidency.”