Disagreements over the fate of suspected Gulenist officers in Greece and the status of disputed Aegean Sea islands continue to chill Turkish-Greek relations. 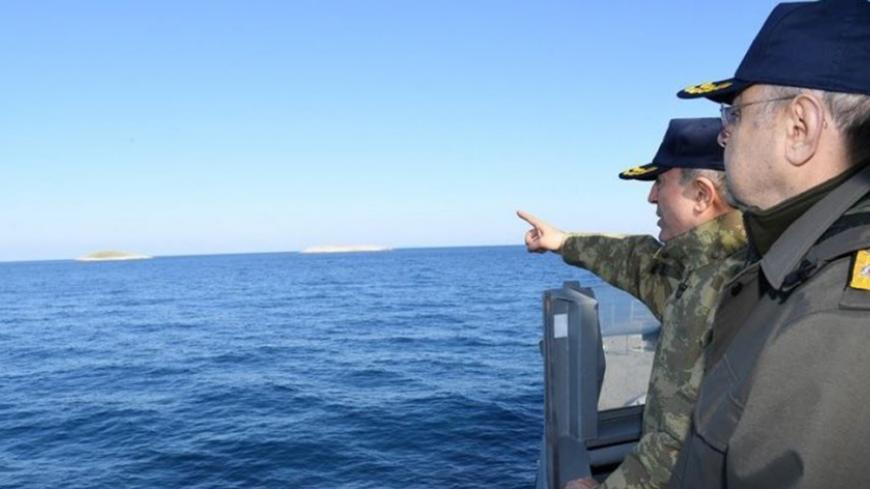 Turkish Chief of General Staff Hulusi Akar on a visit to the area of the Aegean Sea that includes the Kardak islets. Posted Jan. 29, 2016. - Twitter/@metesohtaoglu

Are Greece and Turkey going back to the future?

Following the Greek Supreme Court’s refusal to grant the Turkish government’s request for the extradition of suspected Gulenist officers who allegedly took part in the failed coup attempt of July 15-16, 2016, and Turkish Chief of General Staff Hulusi Akar’s visit to the disputed Kardak islets in the Aegean Sea Jan. 29, old tensions between Athens and Ankara resurfaced.

In the wake of Akar’s visit to Kardak (known as “Imia” in Greek), which came on the anniversary of a crisis between Turkey and Greece that brought the two countries to the brink of war in 1996, the military forces of the two countries initiated naval and aerial patrols around the mini-islands. On Feb. 1, Turkish daily Hurriyet reported that a “boat fight” had taken place around Kardak the previous day, claiming that a Turkish fast attack craft chased away a smaller Greek boat. Hurriyet also reported that a Turkish coast guard aircraft flew over the area Feb. 1.

The Greek side, too, wants to show strength. In the wee hours of Feb. 1, Greek Minister of National Defense Panos Kammenos shared pictures on his Twitter account of a helicopter pass he participated in over Kardak, during which he threw a wreath in the sea to honor fallen Greek troops.

Disputes between Greece and Turkey, which have been NATO allies since 1952, are old. The two sides spent much of the second half of the 20th century bickering over the Aegean Sea and Cyprus, coming to the brink of war multiple times. Yet as Turkey’s European Union prospects improved at the turn of the 21st century, old animosities gave way to greater cooperation in the fields of security, tourism and energy, even though contentious issues relating to the Aegean and Cyprus were never resolved.

The good news is that the two countries are far from a collision course. As George Papandreou, then-Greek prime minister, had pointed out during the Cyprus crisis of 1964, “A clash between Greece and Turkey would be madness, but if Turkey decides to enter the insane asylum, we shall not hesitate to follow her.” A shooting war between Athens and Ankara is even less in the interests of the two sides than they were more than 50 years ago.

While Greece is still struggling to escape the aftereffects of the 2009 massive economic crash, Turkey is already engaged in a shooting war in Syria against the Islamic State (IS) and the Syrian Kurdish Democratic Union Party (PYD) and its armed affiliate, the People’s Protection Units (YPG). Ankara claims that the PYD is in cahoots with the Kurdistan Workers Party (PKK), which has fought the Turkish government for Kurdish independence and autonomy since 1984. Turkey, the EU and the United States designate the PKK as a terrorist organization.

It appears Ankara has bigger worries right now. On Feb. 1, Turkish media outlets reported that the United States had sent armored vehicles to the YPG-dominated Syrian Democratic Forces (SDF). While pro-government newspaper Vatan ran the story on its headline as “US armor to YPG,” Aksam, another pro-government outlet, was more blunt, labeling the episode as “US’ latest betrayal: Armored vehicle to PYD.” Earlier on Feb. 1, Hurriyet Daily News confirmed that the United States had indeed given said vehicles to the SDF as part of the SDF-led operation to liberate Raqqa from IS.

by Murielle KASPRZAK and Joseph SCHMID | AFP | May 26, 2022
END_OF_DOCUMENT_TOKEN_TO_BE_REPLACED